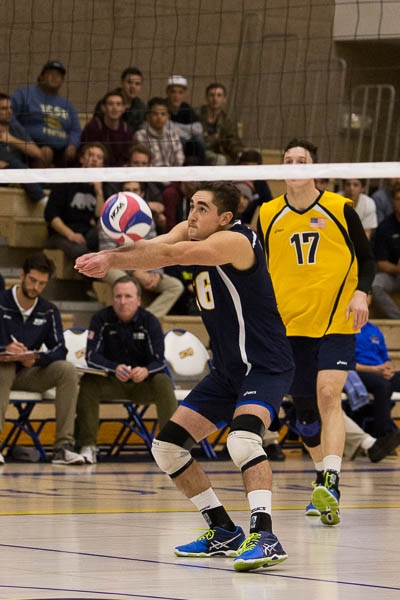 The No. 9 UCSB men’s volleyball team will be headed south for the second-straight weekend for its date with No. 15 USC tonight. The Gauchos will turn around the next day to square off against Cal Baptist on Friday.

UCSB is going into its second set of league games at 5-2 overall, 1-1 in MPSF play after its five-game winning streak was ended on the road against No. 4 UC Irvine. The Gauchos will be looking to bounce back against USC who is in search of its first victory of the season with a 0-4 overall and 0-2 MPSF record. Cal Baptist is currently winless since the start of the MPSF schedule with an 0-2 conference record, but is 3-2 overall.

“It’s not a problem with skill — it’s about our integrity on the court,” redshirt senior middle blocker Ryan Hardy said. “We have to start holding ourselves accountable and stop getting on one another.”

The Gauchos were unable to establish consistent chemistry on the court early enough at Irvine, quickly dropping the first two sets. The visitors pulled back one set before dropping the fourth, ending an underwhelming match against the defending MPSF champions.

“Everybody struggled,” Head Coach Rick McLaughlin said. “Nobody played their game, no matter how good they can be. We were all a bit under par and we can’t let that happen anymore.”
UCSB will look to bounce back Thursday against the Trojans, who have managed to stay ranked despite beginning the season on a four-game losing streak. The two teams split last year’s series 1-1, both sides winning their home fixtures.

“USC is always good,” McLaughlin said. “They started this year a little rough, but we’re playing at USC and it’s their home opener, so it’s going to be tough.”
UCSB enters the match against USC with a definitive edge on both sides of the net. The Gauchos are averaging 12.62 kills per set and 8.08 digs per set, while the Trojans are averaging 10.8 and 5.5 kills and digs per set thus far this year.

Ryan Hardy played an important role in in last year’s two games against the Trojans, averaged six kills per match, including 12 in their 3-2 loss on the road. The redshirt senior middle blocker returned from injury last week after missing three games with an ankle injury, tallying five kills in the Gauchos win at UCSD and eight in the Irvine match, and was vocal about how he is recovering from missing time.

“I’ve come back with the urgency to play because I want to be on the court and I want to be a leader,” Hardy said. “I’m a fifth year senior, so I want to take advantage of all of my time out there.”

The leadership that Hardy brings to the team will be invaluable as the Gauchos continue their road trip on Friday against Cal Baptist, UCSB’s fourth-straight road game.

“Their place is another really tough place to play,” McLaughlin said. “They play in a really small gym and get it going with their crowd, so it’s a different challenge.”

Van Dyne Gym, home of the Lancers, seats just over 1,000 and is known for a raucous cheering section, but UCSB won’t be easily fazed. In its last trip to Cal Baptist, Santa Barbara handily won the match 3-0. UCSB also won its home meeting with the Lancers in straight sets.

A pair of wins this week would keep McLaughlin’s squad in primed position for an MPSF title challenge, keeping it on pace with Irvine and just a game back of the three-team tie for first — No. 1 UCLA, No. 2 Long Beach State and No. 12 CSUN.

The Gauchos will play in back-to-back road matches this week. UCSB will face USC at the Galen Center on tonight at 7 p.m. Following, it will play Cal Baptist on Friday, Jan. 22 in Van Dyne Gym at 7 p.m.

A version of this article appeared on page 9 of January 21, 2016’s print edition of the Daily Nexus.