The Daily Nexus
News
‘Lament’ Art Installation Serves as Tribute
January 21, 2016 at 5:00 am by Kiana Triana

The art installation, which is made up of over 2,000 book covers, was created by Nancy Gifford and originally housed at the Museum of Contemporary Art 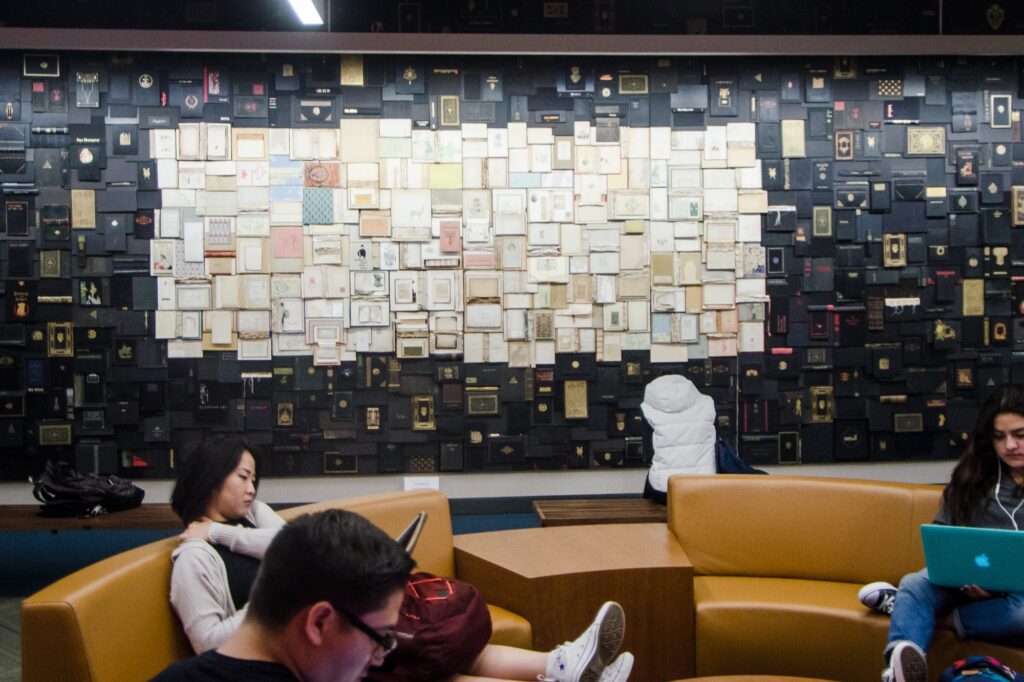 The artwork was welcomed at the grand opening ceremony with a song and dance, both originally composed by a UCSB professor and graduate student, respectively. Vivian Bui / Daily Nexus

The new art installation titled “Lament” is the first artwork to be featured in the UCSB Library for a year from January 2016 until January 2017, composed of over 2,000 book covers to serve as a tribute to the declining use of physical books.

“Lament” is a 10-by-32 foot art installation located on the first floor of the new addition to the UCSB Library. The art piece was formally presented at the library grand opening ceremony and was complemented by a song composed by Heena Yoon, a UCSB graduate student, and a dance choreographed by Christina McCarthy, UCSB’s professor of modern dance.

Rebecca Metzger, assistant university librarian for outreach and academic collaboration, said when she first observed Nancy Gifford’s “Lament” at the Museum of Contemporary Art in downtown Santa Barbara, she thought it would be “perfect” to display in the newly opened library for the year.

“Usually we actually don’t keep our artwork up for a whole year, but with ‘Lament’ we really wanted to sort of have it be this signature piece that was there for our entire grand opening year,” Metzger said.

Metzger said the space “Lament” currently occupies will be transformed into other art installations from various artists after this year.

“We’re calling that space the Mountain Gallery, and we’re open to receiving exhibition proposals from students, from faculty, from curators, from artists who want to show their work in that space,” Metzger said.

Nancy Gifford, “Lament” artist, said she enjoyed the dance and music piece performed at the library grand opening ceremony to complement her work.

“When a piece of art inspires other forms of art,” Gifford said. “They performed the whole thing in front of the piece at the opening, and that was really beautiful.”

Anastasia McCammon, a third-year dance and art history major, said she performed at the ceremony and enjoyed how the dance was different from others she has participated in because it incorporated speaking and improvisation.

“We were all enthralled,” McCammon said. “We seriously spent most of the rehearsal just deciphering and remarking at the tiny little details, amusing placements and hidden messages of the collage of books, pages, images and bindings. It is incredible how well the mural fit into what our dance aimed to portray.”

Heena Yoon, a third-year composition major Ph.D. candidate, said she “fell in love” when she first saw the artwork and sees it as a visual embodiment of the musical piece she was working on.

“I wanted the piece to be an homage to great books and music pieces past and present,” Yoon said. “To be presented by dancers and live musicians right here and now, and to be remembered by the audience throughout their future, not as ‘Heena Yoon’s music’ but as ‘Oh I saw a fun music-dance-theater piece, and it reminded me of the storybooks I loved.’”

Gifford said she appreciates the unexpected positive responses to her work she received in person and in her comments book despite the work being a “requiem” for books.

A version of this story appeared on page 1 of the Thursday, January 21, 2016 print edition of the Daily Nexus.