In the midst of a two-game winning streak, the UCSB women’s basketball team has made an imposing statement in through four Big West games. The Gauchos are 6-12 overall and 3-1 in conference play, having won five of their last six games and are just four wins away from matching their win total from the past two seasons. 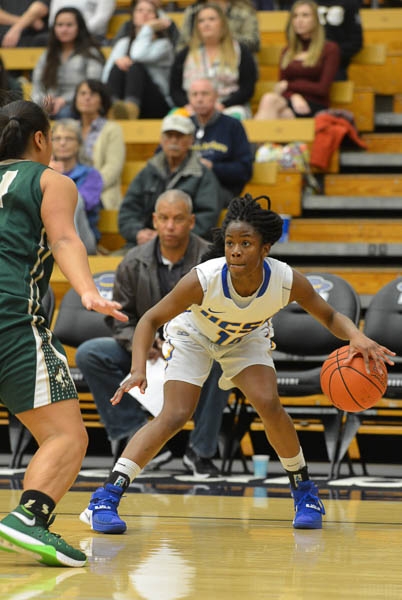 After compelling victories on the road against CSUF and CSUN, the Gauchos return home to the Thunderdome in hopes of upsetting the UC Davis on Thursday and will be back on the road at UC Riverside on Saturday. Both teams currently boast an undefeated conference record with UC Davis owning a 10-6 overall, 3-0 in the Big West and UC Riverside at 11-7 overall and 4-0 in conference play.

Since joining the Big West for the 2007-08 season and for their first time in the program’s Division I history, the Aggies are off to a 3-0 start in conference play.

With aspirations of ending the Aggies’ admirable start, it is important that UCSB sustain its efficiency with ball security. Turnovers have afflicted the Gauchos in a majority of their games this season, however they showed signs of improvement with season-lows of 10 and 12 against Fullerton and Northridge, respectively.

Despite being supplanted of her starting role after the team’s 71-69 loss at Pepperdine, Jasmine Ware has been a consistent scorer from the Gauchos’ group of reserves. The senior guard has notched double-figures in scoring for seven consecutive games and ranks second on the team with 9.9 points per game.

The recent emergence of junior center Je zhe Newton has been an encouraging sign for the Gauchos’ scoring in the paint. She scored a season-high 15 points in the team’s first road victory at Fullerton and has tallied double-figures in three-straight games while her average of 5.2 rebounds per game leads the Gauchos as well.

Yet, it will be UCSB’s defense which will encounter the most difficult task in having to contain Davis’ array of scoring options. Four players in the Aggies’ starting lineup average 10-plus ppg. Moreover, it has been an impressive first-year for forward Morgan Bertsch after redshirting last season. Her 13.9 ppg leads UC Davis as she earned her fifth 20-point game of the season in Davis’ conference opener win over UCI and possesses a conference-leading 59.6 conference field goal percentage.

Following Santa Barbara’s quick return home is its matchup against UC Riverside on Saturday. The Gauchos will look to avenge their lone conference defeat thus far after a 30-point, 83-53 loss to the Highlanders in the opening week of the Big West schedule.

UCR’s 4-0 conference start puts it within just one win away from its best Big West start since joining the conference.

The Highlanders have continued their dominance so far this season, ranking eighth in the nation in assists-to-turnover ratio with a 1.35 average. They also lead the Big West in ppg (82.4), assists per game (22.3), and average the least amount of turnovers per game (10.8).

After setting a season-high 33-points in the first meeting, star-studded guard Brittany Crain will certainly be on UCSB’s defensive radar. A senior from Moreno Valley, CA, Crain’s average of 19.2 ppg leads the conference and ranks 33rd in the nation. She is just 48 points shy of becoming the seventh player in Big West history to reach a career total of 2,000 points.

Complementing the play of Crain is redshirt junior forward Rejane Verin. Since sitting out last season due to redshirting, the UNLV transfer has had a breakout year. She ranks second on the team and in the Big West in scoring with 17.8 ppg. Her career-high 34-point performance in the Highlanders’ 78-60 victory over LBSU earned her third Big West Conference Player of the Week award. While her ability to penetrate and control the paint down is valuable to UCR’s offense, Verin’s precise and efficient passing skills may be more pivotal. She is second on the team in assists per game at 4.1 and recorded a game-high eight assists in the Highlanders win over UCSB two weeks ago.

Riverside is a quickly paced offense that likes to run the floor, but the Gauchos must hold their ground and stay committed to their strategy in hopes of avenging their loss on Saturday.

UCSB and UC Davis will tip-off tonight at 7 p.m. in the Thunderdome as its game at UCR on Saturday, Jan. 23 will begin at 7 p.m. as well in the SRC Arena.