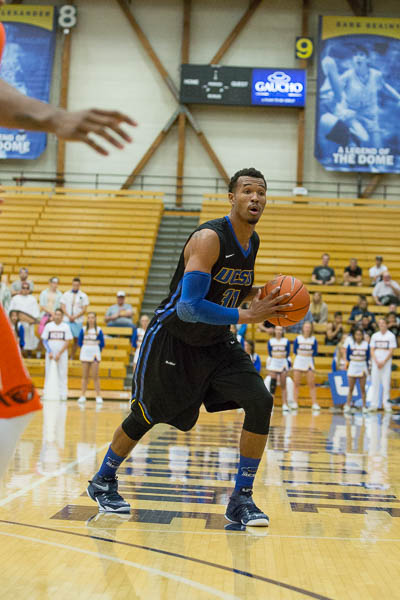 After dropping its Big West opener to Hawai’i, the UCSB men’s basketball team split a close pair of games this past week. The Gauchos came through on the road against Cal Poly last Thursday, winning 76-73 thanks to a go-ahead layup by sophomore guard Gabe Vincent with 11 seconds left after losing a 15 point lead.

On Saturday, Santa Barbara fell apart in the second half for the second straight game, being held scoreless through the final 10:50 on the way to a 61-52 loss in its home conference opener.

“We just wore out. We just got tired and it’s become apparent to me that it’s a problem,” Head Coach Bob Williams said. “We’ve got leads or we’re right there in the last three or four minutes of games and we’ve got no pop. We look fatigued and the type of mistakes we were making were fatigue mistakes.”

Out of the nine teams in the Big West, UCSB is one of six that currently has a record of 1-2 or worse in the conference. The Gauchos stand at 7-9 overall and 1-2 in conference play. The Mustangs share an identical record, putting both teams tied for the fifth best mark in the conference.

Facing UC Irvine and college basketball’s most imposing inside force in sophomore center Mamadou Ndiaye on Saturday, the Gauchos knew they would need to be able to score from outside the paint in order to win. From very early on, they showed not only the willingness to take shots from deep, but the ability to make them.

After falling behind 8-0 through less than three minutes of play, all points being scored by Irvine’s senior forward Mike Best, UCSB answered back with 15 consecutive points, hitting 5-7 three-pointers during the run to take a 15-8 lead by the 11:55 mark of the first half.

That tactic didn’t change much before the first half buzzer, as the Gauchos, led by junior point guard Eric Childress, finished the first stanza knocking down 8-17 from deep, while shooting just 3-13 from inside the arc. Childress finished the half with 12 points on 4-4 shooting, all threes, to give UCSB a 30-28 lead at the break.

The second half told a much different story as the Gauchos went away from the three-ball and were unable to match the Anteaters’ energy down the stretch.

“We knew coming in we were going to have to make shots to beat this team because they’re so big inside the paint,” Childress said. “We knew we had to rely on the three, but at the end we should’ve got into the paint a little bit more so it hurt us towards the end.”

A pair of highlight dunks from senior guard Michael Bryson helped keep momentum on the UCSB side as his side early in the second half. First, Childress found Bryson cutting down the baseline for a spectacular, left-handed slam that the Anteater defense could do nothing but watch, putting the Gauchos up 38-32 with 17:21 to go.

Bryson followed that up just three minutes later, taking a perfect halfcourt lob from Childress over the heads of several defenders and finishing gracefully with a two-hand dunk to keep UCSB up 44-39.

After Vincent hit his fourth three-pointer of the night to put his team up 52-44 with 10:50 to go, the Gaucho offense began to sputter and the Anteaters took over, taking a drastic advantage in the free-throw department.

“We started not moving the ball around, settling with our looks that we were getting, not really sticking to our concepts and we just got rushed,” Bryson said. “Towards the end of the game we tightened up and didn’t do what we normally do, so we’ve got to learn from it and get ready for [this] week.”

Junior guard Luke Nelson’s three-pointer out of a timeout with 3:51 left put the Anteaters up 54-52, giving them their first lead since the 15:37 mark in the first half. Nelson came back down the court less than a minute later to knock down a second consecutive jumper, and the Gauchos fell apart as they proceeded to turn the ball over on three of their next four possessions. Irvine ended the game on a 17-0 run, holding UCSB to 0-11 from the field, 0-4 from the foul line, and five turnovers over the final 10:50 seconds.

“I wish we would have shot more [three-pointers] to be honest with you. If you can’t beat Mamadou at the rim, you’ve got to knock down some mid-range shots, no doubt, but you’ve also got to make some threes,” Williams said. “We didn’t shoot as many in the second half, and I think we would’ve been better off taking eight more threes in the second half than the bad shots we took.”

The Gauchos shot just 3-9 from three in the second half, making just 9-27 shots overall. They finished the game with just one made free throw on five attempts, compared to 14-22 from the line for Irvine in the second half alone. The Anteaters were 19-32 on free throws for the game.

“The big disappointment is a lot of our fouls were shooting fouls, especially in the second half,” Williams said. “On the defensive side I think we did a good job on [Ndiaye]. We said we’d rather have him shoot free throws than get a dunk. The difference in the game was Mike Best.”

For Irvine, Best’s hot start saw him end with a game-high 20 points on 8-13 shooting. Ndiaye was held to just 1-3 from the field and had just one block, but still managed to get to hurt UCSB, making 9-16 from the foul line to finish with 11 points and 13 rebounds.

For UCSB, Vincent, Bryson and Childress were a combined 10-20 from three-point range, putting up marks of 14, 13 and 12 points, respectively, but simply didn’t have enough gas in the tank down the stretch to pull off a second consecutive win.

“I think we need to want it more. It was coming easy to us the first half,” Bryson said. “When shots weren’t falling in the second half, we got lazy and weren’t doing the little things we needed to do to get a win. I don’t think we wanted it enough tonight.”

Against Cal Poly two nights prior, the Gauchos had one of their better shooting first halves of the season, going 17-34 from the field to take a 43-38 lead into halftime on the road. Vincent was on fire in the first half, hitting five straight three-pointers as he headed into the break with a game-high 17 points on 6-10 shooting.

UCSB held onto the lead for most of the second half, as a pair of free throws by Vincent made it 68-53 with 7:41 to go. However, the recent trend of the Gauchos falling apart late in games showed its head once again, as the Mustangs went on a furious rally. Senior forward Joel Awich’s three-pointer with 1:29 remaining put Cal Poly up 73-72, giving the Mustangs’ their first lead since the eight minute mark of the first half.

With less than 20 seconds to go, Bryson drove through the middle before finding Vincent cutting down the left side, and Vincent finished with a strong layup while being fouled to put UCSB back up 74-73. A missed free throw gave Cal Poly a chance to win it at the other end, but senior guard David Nwaba missed the potential game-winning layup with seconds left.

After a pair of made free throws by Childress, Cal Poly’s Ridge Shipley missed a three-pointer at the buzzer, giving the Gauchos a 76-73 victory and their first conference win of the season.

Vincent finished as the hero with career-highs in points (27) and three-pointers made (7-11), while forward Sam Beeler came up big with 17 points and 12 rebounds on an efficient 8-9 shooting night.

The Gauchos will be back in action tomorrow as they face Long Beach State in the second of a three-game homestand. Tip-off is set for 7 p.m. at the Thunderdome.