The Daily Nexus
Sign of the Times
Uncle Sam and Saudi Arabia: The Most Awkward BFF’s Ever
January 14, 2016 at 5:00 am by Nik Frey 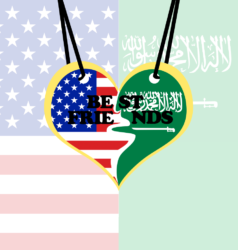 In the wonderful world of friendship, there exist many fun categories. We have our really “good friends” (bless their hearts), our “longtime friends” (the ones you’ve known for years but only see occasionally), our “regular friends” (the ones you hang out with often but would never discuss anything deeper than your V-neck), our “hobby-buddies” (the ones you only do hobbies with but God-forbid you grab a beer together at Woodstocks Pizza), our “party friends” (you only see them in large social gatherings but have no intention of interacting with them in real life), our “work/office buddies” (minus Toby, nobody likes Toby), our “acquaintances” (also known as “whatever friends” — they’ll drop out of your life like flies), our “social media friends” (most of which are several steps below “acquaintance” and probably aren’t even real), our “shitty friends” (honestly they suck in so many ways that you question your relationship whenever you’re under the same roof) and of course at the very bottom we have our “friend-zone friends” (no explanation needed for this dark and scary realm).

If you’re a sorority girl, you may even be lucky enough to have a “Best Friend Forever” (or BFF, if you will) — I won’t even hide my jealousy because that just sounds awesome! But before my envy gets the best of me, I remember that my citizenship guarantees my membership into the most amazing and intriguing BFF pact in the world — I’m American and my BFF by default is Saudi Arabia!

Uncle Sam and Saudi Arabia have the most awkward BFF relationship in the world. They are like the two weird kids you know from college that spend an absurd amount of time together and have each other’s backs despite all adversity or however much they may bicker at each other, because they share so much in — wait, hold on, that’s right … they share nothing in common!

Uncle Sam and Saudi Arabia are totally weirded out by each other and hate each other’s guts, yet somehow still feel the need to hang out all the time. Even better, their families/friends don’t even get along, so they have to arrange one-on-one meetings as to avoid igniting international outrage. Uncle Sam is a proud, secular venture capitalist who loves to travel, raid his friends’ kitchens, beat up bad guys and set really high moral standards for his entire friend group, which he occasionally chooses not to follow. Nobody really questions him, though, because Uncle Sam can kick their asses (with a big, fat, politically correct smile on his face).

Saudi Arabia, on the other hand, is like the old-fashioned trust-fund kid who inherited a fat sum of black money (oil) and loves to tout it in his neighbors’ faces while literally beheading anyone he thinks might snatch it away from him — the target of which is almost exclusively Shia Muslims with certain issues regarding the bigotry of the Saudi monarchy. Saudi Arabia loves tyranny, but Uncle Sam loves democracy. While they both dislike that stupid jerk from down the street named ISIS, Uncle Sam is the only one actually willing/able to crush him. Despite the fact that their only real common denominator is a burning lust for Saudi Arabia’s oily inheritance, and even though Saudi Arabia continually does sketchy things that piss Uncle Sam off — like performing a shady mass execution just last week of 47 imprisoned “terrorists,” many of which were Shia minorities who simply challenged the authority of Saudi’s monarchy — our BFF relationship is going just swimmingly.

So … why is this? And why have I wasted all your time disgracing the fine art of political analysis with my nonprofessional opinion? All my stupid extended metaphors aside, the relationship between the United States and Saudi Arabia defies all common sense and the two opposing cultures have a view of the world which could not be more different.
To put it bluntly, international relations is not conducted in terms of “friendship.” Nations have interests, and that’s pretty much it. If we happen to share interests, we cooperate. If we have opposing interests, we argue extensively about them before ultimately deciding to kill each other to get our way. Sorry not sorry, that’s how the international system has always worked, and despite the self-righteous age of PC Principle, it’s not going to end anytime soon.

This is precisely what makes the close US/Saudi relationship insane — we barely share interests! Our unrelenting love for each other is therefore best described at the level of “Best Friend Forever.” However, in a realistic international system where there are serious consequences for having “shitty friends” (refer to the first paragraph for a definition refresher), Uncle Sam and our whole international image would benefit greatly from a cute little breakup with Saudi Arabia. Let’s change that relationship status to “single,” shall we?

While America’s unholy alliance with Saudi Arabia definitely puts a large check on Iran, what the hell is the purpose of a check on Iran if Saudi Arabia is doing the same kind of sketchy theocratic crap that Iran is doing?

Why would we ever arm Saudi Arabia to fight their Sunni friends in ISIS if Saudi Arabia is just as fundamentally opposed to peace in the Middle East as ISIS is (though maybe on a less violently messianic scale), especially if those weapons will no doubt be used against us in the future? We must acknowledge that the interests between the United States and Saudi Arabia have increasingly grown farther and farther apart, largely due to all the shady things that Saudi Arabia does to both its neighbors and its own people. I won’t waste space in this article going into detail about every little example of how Saudi Arabia is a country where theocratic scum-baggery is becoming an institutionalized norm, but I’m sure that a quick Google search on your Internet machine will do just the trick.

I also realize that both nations do extensive business together — as world’s best foreign policy expert Donald Trump said on MSNBC’s show “Morning Joe,” “I would back Saudi Arabia, you know why? We’re a debtor nation. They’ve got nothing but money.” Trump may have a point, but many of our other international partners have money. Our other “friends” also have oil. America’s dependency on foreign oil sucks enough as it is, but it doesn’t help that we are reduced to groveling at OPEC’s feet while Saudi Arabia holds a crossed finger behind their back with every handshake our nation’s leaders make. Easier said than done, but it is definitely time for the United States to ditch our BFF relationship for something more rational. We don’t need to be hostile to Saudi Arabia, but can we please avoid being so disgustingly friendly? Saudi Arabia is really cramping our style.

I think it’s time for Uncle Sam to reevaluate our BFF relationship with Saudi Arabia. And while the whole country gets busy with that, I’ll be busy apologizing to my friends who read the first paragraph as I reevaluate my personal friendships. Peace in the Middle East, I’m out.

Nik Frey hopes you were able to relate to his non-expert ramble.

I wonder if you have ever been to Saudi Arabia or know anything first hand about the country. Your comments are stereotypical and uninformed. I have family who live in Saudi Arabia and have for a long time. I was part of the idealism of the 1960’s in college but then, at least we had real, rather than virtual contact with the issues.

Hey RiellyGood, thanks for sharing your opinion. I have not ever physically been to Saudi Arabia and that is why I defined my opinion as a “non-expert ramble”… I’m not an expert and I don’t pretend to be. However, I have spoken many times with several friends who grew up there and I am not blind to the way that Saudi Arabia has an entirely different world-vision than the United States. This is not a problem in and of itself, but it is a problem as far as alliances are concerned. Feel free to judge me as an “idealist college… Read more »