The Daily Nexus
Tennis
Men’s Tennis Looking to Make a Statement in Road Trip
January 14, 2016 at 5:01 am by Daniel Moebus-Bowles 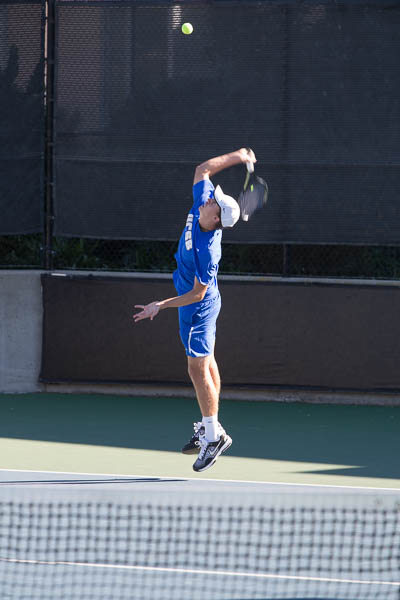 After a long preseason of preparation, the No. 54 UCSB Men’s tennis team will hit the road to compete in three away matches in the North West. On this trip the Gauchos will face both No. 62 Washington and No. 12 Texas in Seattle, WA and then head south to face No. 49 Oregon in just four days.

​“This opportunity is obviously huge for us and we are confident in our talent and the work we have put in to preparation,” senior captain Morgan Mays said. “The team is looking great and we can’t wait to show these big conference programs, their fans, and the nation who the Gauchos are.”

​Santa Barbara is coming off of a very successful season where the team boasted an undefeated dual meet record at home and hoisted the Big West Championship trophy in the end. The team’s success was not finished following the season’s end, as it added key pieces to its roster in the summer.

​During the offseason, the Gauchos welcomed in the No. 15 recruiting class in the nation that consisted of four young players who are ready to begin their careers at UCSB. In this class came freshmen Nicolas Moreno de Alboran, Anders Holm, Oliver Sec, and Riley Scott. Due to his success in the fall preseason, Moreno de Alboran has earned himself a national ranking at No. 81 out of all Division I singles players and now joins Mays as one of just two players on the team to hold a professional ATP ranking as well.

​Moreno de Alboran, Holm, and Sec are all expected to be in the starting lineup heading into these three matches. They will be joined by veterans Mays, senior Nathan Eshmade, and sophomore Cody Rakela on the singles side of the competition. Senior Miles Seemann will join the starting roster as a doubles specialist.

“Everyone is itching to get going this season,” Mays said. “It has been a great Fall of training and the team is primed and ready.
​
​Although this will be the first action of the dual meet season, the team has already played in several tournaments in the fall and made its mark in those competitions.

​In the hosted UCSB Classic, two Gauchos emerged victorious in their individual flights amongst a tough pool of players from respected universities such as Stanford, Cal, Oregon, Fresno State, and several Big West Conference teams. Senior Andrew Riminton took home the championship in Flight B for singles and Anders Holm joined him on the podium as he swept his way to the Flight C title and took gold.

​Following the UCSB Classic, two Gauchos took home a very prestigious honor in competing in the 59th Annual So Cal Intercollegiate Championships. A doubles team of Eshmade and Seemann, whom will play alongside each other in the upcoming dual matches, took first place in the tournament winning several matches against strong duos to reach the top. They will look to take this momentum into the regular season.

​Santa Barbara’s first match will take place on Friday at 5 p.m. vs Washington Huskies. The team will then face Texas on Saturday at 2 p.m. before traveling to Eugene, Or. to face the Oregon Ducks Monday morning at 10 a.m.