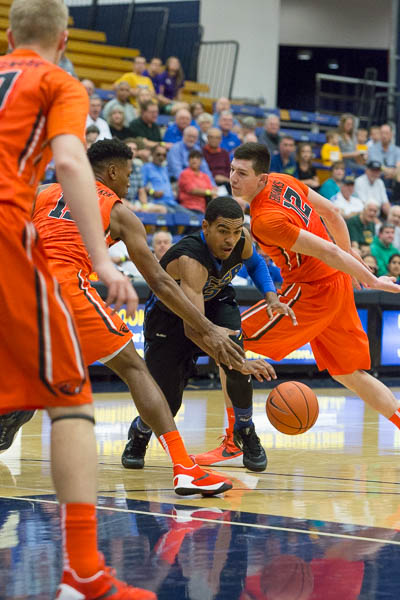 Gabe Vincent tries to gain control after he slips through some players. Dustin Harris/Daily Nexus

The UCSB men’s basketball team heads to San Luis Obispo tonight to face Cal Poly as both teams look to pick up their first win of the conference season.

“It’s a big game. It’s going to be one of the bigger league games for us, so I’m excited to see what we can do,” redshirt freshman forward Ami Lakoju said. “We just need to execute more and maintain our focus level that we didn’t have at the end of the Hawai’i game.”

The Gauchos enter at 6-8 overall, 0-1 Big West after Hawai’i snapped their four-game winning streak heading into conference play in a close 65-57 loss this past Saturday. The Mustangs enter with an identical record of 6-8, 0-1, also having lost at Hawai’i last week.

“We just need to have the same mindset we had during that four-game winning streak. We were focused and playing together and we worked on a couple different things in practice to be more cohesive,” sophomore forward Alex Hart said. “With Cal Poly it’s a rivalry, so I think that’s been fueling the guys in practice this week to take care of that.”

Last season, UCSB went undefeated in its three games against Cal Poly, including a 54-50 win in the Big West Tournament Quarterfinals. However, none of those wins came in particularly convincing fashion, as the Gauchos managed only a 5.67 average margin of victory, with current leading scorer in senior guard Michael Bryson averaged just eight points in each of those games.

That average will likely be surpassed tonight, as Bryson has shined as UCSB’s top offensive option so far this season. The 6’4″ guard leads the Big West in scoring at 19.5 points per game, shooting at a highly efficient clip of 47.3 percent from the field, third-best among guards.

After a slow start to the season for UCSB, reigning Big West Freshman of the Year Gabe Vincent has found his shot in recent games, going 15-31 on three-pointers in his last five outings. The sophomore guard backs up Bryson as the team’s second-leading scorer, putting in 12.6 ppg. Vincent ranks fifth in the conference at 2.3 three-point makes per game, hitting 40 percent from deep.

As a team, UCSB is virtually tied with Cal Poly for sixth in shooting percentage at just under 44 percent, but the Mustangs average the second most points in the conference at 75.4 a game. That mark can be attributed to their taking good care of the ball, averaging a conference-best 10.5 TO per game, as well as their 37.9 percent shooting from deep, which ranks second. On the other side, the Gauchos average just 70.4 ppg and convert 33.7 percent of their threes, both good for seventh in the Big West.

Further bringing down the UCSB offense is its inability to get to the free throw line. The Gauchos average just 15.2 FTA per game, putting them miles behind conference leader Cal State Fullerton’s average of 25.9.

“Free throws have been a big thing all year,” Hart said. “I think we’ve been starting to catch up with the rest of the conference though, especially with our guards attacking a lot more, getting to the rim and getting contact. I think we’re on the right track.”

The Gauchos’ inability to get to the line hurt them down the stretch in their opener against Hawai’i, as they were outshot 13-2 in the second half from the charity stripe in a game that went down to the wire.

Luckily for UCSB, the Mustangs haven’t fared quite as well from the line, making just 2.78 more free throws per game than the Gauchos.

On the defensive side, Cal Poly has struggled, allowing the most points to opponents in the conference at 75.9 per game. The Gauchos meanwhile have been solid when they don’t have possession, ranking third in opponent field goal defense (40.6%)  and second in three-point defense (31%). However, no matter if the offense has been hot or cold this season, Head Coach Bob Williams’ team has continued to emphasize defense and refused to get complacent with its effort.

“We need to keep making defensive improvements,” Lakoju said. “Offense is something we can improve every day, but if we lock down defensively then our offense should be able to translate.”

This will be the last of a two-game road trip for the Gauchos before they return home for three straight, starting with UC Irvine this Saturday.

UCSB and Cal Poly are set to tip-off at 7 p.m. tonight at the Mott Athletics Center in San Luis Obispo.