The Daily Nexus
Science & Tech
Emotional Theory: Getting Physical
January 14, 2016 at 6:55 am by Natalie Overton 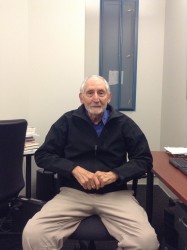 When I arrived at his office half an hour early, the door was open. Sitting comfortably at his neatly paper-laden desk was UCSB Researcher and Sociology professor, Dr. Thomas Scheff (or “Doc”, as his students call him). After a brief introduction, I could see that he was used to talking about his work, yet showed no signs of stilted professionalism.

I had come to talk about our feelings, more specifically, our emotions. Contrary to common synonymous usage, ‘feelings’ are different from ‘emotions’. In his recent paper, “What are Emotions? A Physical Theory”, Dr. Scheff explains that emotions are actually physical reactions to an event – the ‘feeling’ part occurs when these physical reactions are delayed.

“Suppose for a moment that some emotions are felt and others are not. If it’s not felt, where is it? And this article says, well, it’s in your body,” Sheff said.

Scheff gave the example of watching someone who seems very angry, but doesn’t register his or her own anger. They aren’t feeling the anger, because it’s being automatically expressed through their bodies.

This isn’t a commonly accepted theory. In fact, very little is known scientifically about emotions. Why?

“For some reasons they haven’t been really studied adequately compared to perception or cognition behavior. “Modern psychology thinks of itself as behaviorist, which kind of leaves out emotions entirely,” Sheff said.

He based a significant portion of his ideas on John Dewey’s “attitude theory of emotion”. Dewey, a big-time philosopher around 100 years ago, introduced this theory claiming that an emotion is a physical, internal predisposition to act that has been delayed.

According to the Stanford Encyclopedia of Philosophy, Dewey emphasized the fact that not just any action is expression of emotion. Some actions merely “discharge” the emotion on impulse. An example of this would be acting angrily, like yelling or defenestrating heavy objects. While they may get rid of the feeling in the short term, they are not resolving the emotion, and thus they are not expressing the emotion. The feeling will come creeping back.

What may seem expressive to an outside observer because it tells us something about the state of the person observed may not be expressive from the standpoint of the subject. Mere “giving way” to impulsion does not constitute expression. Expression requires clarification, which for Dewey means an ordering of impulsion by way of incorporating values of prior experiences.

How can we express our emotions…correctly? Apparently, it can only happen at a specific distance. Catharsis, the release of extreme emotions, can help us complete the emotional cycle, but it takes practice. Catharsis only occurs when the subject is just close enough to be in touch with their emotions, but far enough to avoid losing control. Scheff, like others in the field, refers to this goldilocks zone as ‘aesthetic distance’, when “you’re partly in, partly watching yourself happen, then that does the trick; that’s cathartic.”

This happy medium is hard to find. And doing so can be really scary. During an overly-involved emotional episode, Scheff recounted, “…For whatever reason, you feel like you’ve lost control. It’s not true; you always have control. But you need to practice these things.”

Societal codes dictate that everyone, especially men, must store these emotions somewhere else to deal with them later. Oddly, the more oppressed men might have it slightly better than the women.

“There’s a bad cry, and a good cry. Men don’t know about bad cries; they’re so repressed that they can only have a good cry,” Sheff said.

It’s rarely appropriate to express ones emotions immediately, and this leads to unnaturally negative feelings and misplaced anger or aggression. The moral? Express yourself. At least, try. As Doc reminds us, “grief is inevitable with human beings because we are dependent on other people, not just ourselves. That’s mammalian. It’s quite physical, grief, and attachment.”

A version of this story appeared on p. 14 of the Thursday, Jan. 14 print edition of the Daily Nexus.