The Daily Nexus
Sports
78-67 Ending Seals Conference Opening Win for UCSB in Blue-Green Rivalry
January 8, 2016 at 12:32 am by Sean White

After winning back-to-back games for the first time since 2013, the UCSB women’s basketball team has now won three consecutive games for its first time since 2012. The Gauchos’ 78-67 win over Blue-Green rival Cal Poly is their first victory in a Big West conference opener since the year as well. 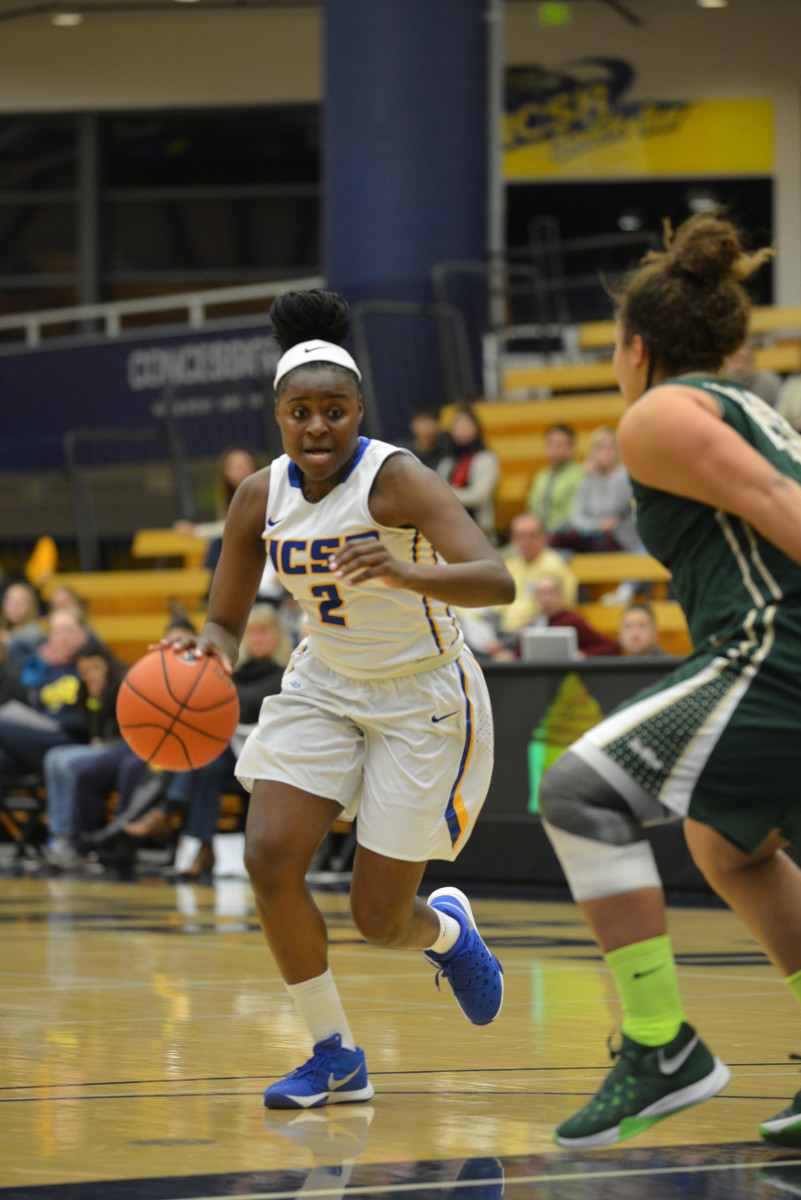 “It means a lot to me and the team,” sophomore forward Chaya Durr said. “We’ve improved so much from last year and since Coach Bonnie came here. We work hard every day, we all get along and it’s more fun this year.”

Santa Barbara shot a season-high 50 percent from behind the three-point line, making 9 of 18 attempts. It finished with its second-best field goal percentage of the year as well at 55.6 percent, just shy of its season-high (57.1 percent) against La Verne.

Gradually becoming the Gauchos’ “go-to” player is sophomore guard Makala Roper, who led the team Thursday night with 19 points and was 4-6 from behind the perimeter. Helping solidify UCSB’s frontcourt as of recently has been sophomore forwards Chaya Durr and Taylor Farris.

In back-to-back games, Farris has played over 30 minutes and scored in double-figures, finishing with 14 points on Thursday. It was a solid outing for Durr as she earned her first career double-double with 11 points and 11 rebounds to go with four steals.

It was a compelling victory for UCSB as it ended a nine-game losing streak to Cal Poly, its first victory against the program since March 5, 2011. The Gauchos had not beat the Mustangs in the Thunderdome since Feb. 27 2010.

Both teams traded baskets to begin the game, but a 6-0 UCSB run gave it a chance to distance itself from Cal Poly at a lead of 15-8. The trading of buckets continued as a jump shot by sophomore guard Dynn Leaupepe brought Cal Poly within three at 15-18. However, a three-pointer off the bank of the backboard by freshman guard Coco Miller ended the first quarter with the Gauchos up, 21-15.

Miller’s long distance make was the start of an 11-0 run that flourished in the beginning of the second quarter, forming into a 29-15 Santa Barbara lead. A jump shot by senior point guard Lisa Marie Sanchez brought Cal Poly within single-figures at 29-20, but the Gauchos went on to enter halftime with a 38-20 lead.

Setting up UCSB’s lead was its stellar defense in the first half. It held Cal Poly to a 34.6 shooting percentage and strayed away from sending the Mustangs to the free throw line, not allowing any attempts.

The Gauchos recorded 11 steals in the first half, their most in a half this season. Their tremendous defense resulted in Cal Poly scoring just five points in the second quarter as UCSB held the Mustangs scoreless from the 5:23 mark to the closing of the period.

“Our best offense was our defense,” Henrickson said. “It helped us that Poly played like some teams we had played, so it wasn’t a whole different scheme, offensively and defensively. It’s contagious when you start making shots. But, in the huddles all we kept talking about was our defense. That’s what got us going, that’s where you get juice and momentum.”

UCSB didn’t let up in the second half, responding with back-to-back three-pointers by Roper and Miller.  However, the Mustangs turned to a full-court press defense in the second half in hopes of making a comeback. To Cal Poly’s benefit, the press worked as UCSB turned the ball over 18 times in the second half to conclude with a total of 27 on the night.

“Give them [Cal Poly] credit,” Henrickson said. “They’re not a pressing team, but they had to do that to get back in it. We didn’t attack that as aggressively as they attacked us.”

The improvement on defense led to Cal Poly cutting UCSB’s lead as junior forward Hannah Gilbert guided the Mustangs back from behind. For the second consecutive game, she registered another 20-point game with 22 points on 9-13 shooting and six rebounds.

Still, Santa Barbara earned its largest lead of 51-22 in the third quarter, but saw it diminish in the fourth quarter as the Mustangs managed to trim the Gauchos’ lead to a 10-point deficit of 65-55 with 4:40 remaining in the game.

Bringing UCSB’s lead to such a deficit was Cal Poly’s Sanchez, whose scoring outburst of three-straight three-pointers sparked the Mustangs’ 11-0 run. Sanchez finished with 15 points on a 60 percent shooting effort and 3-5 shooting from three-point range.

Cal Poly outscored Santa Barbara 34-18 in the final quarter. Down 10, sustaining the Mustangs’ possible comeback was UCSB’s poor free throw shooting in the fourth quarter. The Gauchos shot 4-13 at the line, but were relieved of their free throw woes by a Roper three-pointer which handed UCSB a 68-55 lead.

Despite the Mustangs’ scoring surge to end the game, their improvement in performance came too late as their 26 turnovers had delayed their offense earlier in the game. Some late baskets would allow Cal Poly to reduce the Gauchos’ lead, but it never managed to get within single-figures again and was defeated 78-67.

UCSB will remain at home for its next conference game versus UC Riverside on Saturday, Jan. 9 at 7:00 p.m. in the Thunderdome.