The Daily Nexus
Sports
Blue-Green Rivalry to Start Big West Play for UCSB on Thursday, Continues with UCR on Saturday
January 6, 2016 at 2:51 pm by Sean White

With each team’s non-conference schedule finished, it is expected that each program has a general understanding of what it has to offer as the Big West Conference schedule is near tip-off. While it was a tough non-conference stretch for the UCSB women’s basketball team, enduring an eight-game slump at one point, the Gauchos may have just hit their stride before entering conference play. 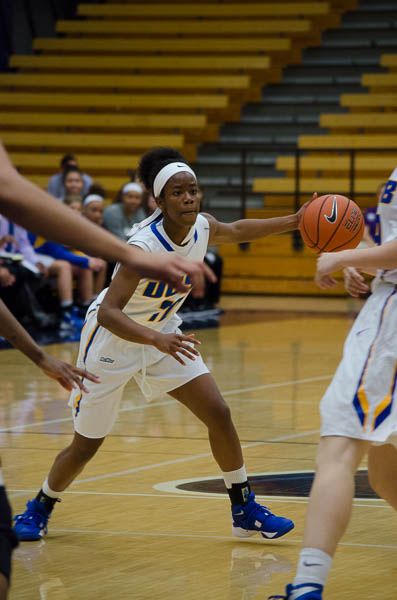 Santa Barbara won its final two games versus La Verne and Morehead State to close out its non-conference schedule with an overall record of 3-11. Thursday’s conference opener couldn’t be any more enticing as the Blue-Green rivalry will be in full effect with the Gauchos hosting Cal Poly.

They welcome the Mustangs, 7-6 overall, who have finished within the top three of the Big West standings for the past seven-straight seasons, but have not won the conference tournament championship since 2011. Cal Poly is also in search of its 10th consecutive win against Santa Barbara.

UCSB continues its home stand with a matchup versus UC Riverside on Saturday. The Highlanders are 7-7, but have a losing record on the road of 3-6. While Riverside last played on Saturday, both UCSB and Cal Poly should be well rested having not played in over a week.

“It’s been nice to have this much practice time to clean up things,” Head Coach Bonnie Henrickson said. “Sometimes when you play so frequently and don’t get enough practice, you get game slippage. We’ve just got to work on us, honestly.”

Due to the indefinite ineligibility of freshman forward Kali Jones, UCSB has been forced to play with a smaller lineup. However, in three games without Jones, the Gauchos have surpassed their season average of 35.9 rebounds per game with an average of 47.6. They are 2-1 and have outrebounded each of its opponents, recording consecutive season-highs of 49 versus La Verne and a season-best 58 versus Morehead St.

While UCSB seems to have established its presence on the boards, it will be tested in the paint by Cal Poly’s junior forward Hannah Gilbert. Despite the graduation of former two-time All-Big West First Team selection, guard Ariana Elegado, Gilbert has embraced a bigger role as the Mustangs have become more active in getting the ball in the paint.

Her 52.6 field goal percentage led the Big West last season and she currently leads the conference in rebounding with an average of 9.6 boards per game, ranking 35th in the nation in addition to being second on the team in scoring, averaging 12.2 ppg. Gilbert also is atop the conference in double-doubles with five on the season and recently earned Big West Player of the Week honors for achieving career-highs in points and rebounds with 23 and 17. Her career night helped Cal Poly break its single-game school record for rebounds with a total of 74, surpassing the former record of 67.

Santa Barbara’s physicality and ability to consistently box out in the paint will be key in denying the Mustangs of having an advantage on the boards.

UCSB’s matchup versus UC Riverside on Saturday will be the end of a four-game home stretch before heading back onto the road. Santa Barbara looks to end another losing streak this weekend as it has loss the last three meetings to Riverside.

In order to prevent a fourth-straight loss, the Gauchos must contain UCR’s lethal scoring offense. The Highlanders lead the Big West in points per game (73.6), field goal percentage (43.6), assists per game (18.6- 11th nationally), free throw percentage (72.7), three-point percentage (35.1- 49th nationally) and commit the fewest turnovers with an average of 15.4 per game.

In addition to its No. 11 national ranking in assists per game, Riverside ranks seventh in the country in total assists with 260 this season while ranking 23rd with a 1.21 assists turnover ratio.

The share of wealth on offense lands three Highlanders — senior guards Brittany Crain and Annelise Ito as well as redshirt junior forward Réjane Verin— within the top five scorers of the Big West.

It comes as no surprise that the reigning Big West Player of the Year in Crain is atop the conference in scoring (17.6 ppg)  after ranking 11th in the nation and first in the Big West in points per game last season with an average of 21.7. She also ranks fifth in the Big West in three-point percentage at 36.6 percent.

Ahead of Crain by a margin of .03 is UNLV transfer and former Mountain West Conference Freshman of the Year, Verin, who’s 17.9 ppg leads the conference while she also ranks second in field goal percentage (49.5) and fourth in rebounds per game (7.9).

In the team’s last game against Grand Canyon University, Crain and Verin both recorded double-double performances of 20 points and 10 rebounds, a milestone that hadn’t been achieved by a pair of UCR players since 2013.

Completing the Highlanders trio of scoring alongside Crain in the backcourt is Ito. Her averages of 12.8 ppg and 7.1 rebounds per game ranks fifth in the Big West while she leads the team’s foundation of assists with an average of 4.9 per game which stands second in the conference.

UCR is loaded on the offensive end, which will call for a big game from UCSB’s top scorers in sophomore guard Makala Roper and freshman guard Coco Miller.

Roper leads the Gauchos in scoring at an average of 12.1 ppg while Miller is second on the team at 9.2 ppg. Both are tied for the team lead in most games with double figures scored at seven while Roper has the edge of one game over Miller for most 20-point games at three.

If Roper and Miller can manage to stay engaged and provide UCSB with scoring on offense throughout an entirety of four quarters, the Gauchos may be able to close out their conference opening weekend with a victory.

UCSB’s conference opener will be Henrickson’s introduction to the Big West after spending just over a decade at the University of Kansas. Although the Big West isn’t one of the powerhouse conferences like the Big 12, Henrickson maintains the same mentality despite the change in conference.

“I have great respect for the Big West,” she said. “You have quality coaches. I appreciate and respect teams that play the game it’s supposed to be played. This time of the year, you either get better or you get worse, nobody stays the same. It’d be a disservice and disrespectful if I coached them [UCSB] any differently.”

Thursday’s contest versus Cal Poly will begin at 7:00 p.m. while Saturday’s game on Jan. 9 versus UC Riverside will take place at 4:00 p.m. Both games will be played in the Thunderdome.