The Daily Nexus
Sign of the Times
The Mess Created by No-Fly Lists
December 28, 2015 at 6:00 am by Calvin Chiu 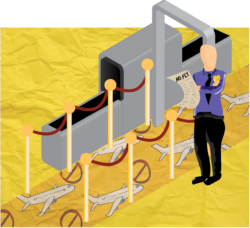 After the San Bernardino shootings, the debate over gun control has ignited once again. In his address to the nation, President Barack Obama advocated for banning those on the Transportation Security Administration (TSA) no-fly list from being able to purchase firearms. He asked, “What could possibly be the argument for allowing a terrorist suspect to buy a semi-automatic weapon?” The answer to that question is, of course, none. There are no possible arguments for allowing potential terrorists to gain access to firearms.

The problem is that the truth is much more complicated. The TSA no-fly list is riddled with problems of accountability and due process; basing our gun control laws on a flawed tool can only lead to flawed policy.

The TSA no-fly list was created after Sept. 11, 2001 as a method to screen out potential terrorist suspects and prevent them from boarding commercial planes in the United States. But a perfectly reasonable idea in theory became a troubled system in practice.

Time and again individuals who had nothing to do with terrorism were placed on the list in error or mistaken for someone with the similar name. In one famous incident, former Senator Ted Kennedy was barred from boarding a flight because someone on a terror suspect list had used the alias “T. Kennedy.” It took Kennedy, who had an entire staff, three weeks before they could clear up the miscommunication once and for all. As Kennedy himself asked, “How in the world are average Americans who are going to get caught up in this kind of thing … going to be able to get treated fairly and not have their rights abused?” The Department of Homeland Security itself acknowledges that “Ninety-nine percent of individuals who apply for redress are not on the terrorist watchlist, but are misidentified as people who are.”

The criteria used to qualify for the list are frustratingly vague and oftentimes arbitrary.

But the myriad of issues runs far deeper than simply mistaken identity. The criteria used to qualify for the list are frustratingly vague and oftentimes arbitrary. The U.S. Department of Justice bases their listings on “reasonable suspicion,” conceding that “identifying individuals who ‘may be a threat to civil aviation or national security’ is a predictive judgment intended to prevent future acts of terrorism in an uncertain context.” Suspects also need not meet a standard of “probable cause” to commit a crime, merely a “reasonable suspicion.” To make matters worse, individuals placed on the list are often given insufficient recourse to address their placement.

The current proposal also poses troubling questions of civil liberties. At issue is the question of whether or not individuals on the no-fly list should be able to purchase firearms. Regardless of our individual opinions on the Second Amendment, the Supreme Court has ruled that the right to own a firearm is a constitutional right. Few would seriously disagree with the assertion that this right is not absolute, but to deny an individual this constitutional right, or any other, would require due process. Individuals neither charged nor convicted with a crime face the consequences of being listed, with little to no opportunity to plead their case before a court of law. It is not surprising, then, that the American Civil Liberties Union has spoken out against basing gun control on a no-fly list unless the federal government fundamentally reforms the list and gives individuals sufficient recourse to plead their case before a neutral institution.

Instead of focusing on flawed policy, government at all levels should look instead at practical, narrowly tailored solutions to the problem. Congress ought to consider increasing the attention devoted to the National Instant Criminal Background Check System (NICS), a system plagued by woeful underfunding, inadequate data and ineffective mandates. If government is to mount a serious effort to reduce gun violence, it must ensure that law enforcement at both the state and federal levels work closely to cooperate and consolidate criminal databases. Congress needs to implement universal background checks, which would reduce the potential for firearms flowing from legal hands to illegal ones.

No one disputes the importance of preventing terrorists from getting their hands on firearms, but to use the no-fly list as a basis for such policy is a flawed, misguided approach. If our experiences over the past decade and a half have demonstrated anything, it is that countering terrorism is a hit-or-miss process. Bringing that uncertainty into another realm of public policy would be to open a whole new can of worms. We as a nation must be very careful to push for policies that can make credible strides toward reducing gun violence. This idea is not one of them.

Thanks for writing this. I agree fully. It’s shameful how many people were willing to question the constitutionality of the No Fly List when Bush was president, but now that Obama is president are willing to use it as a criteria for gun ownership.