While the UCSB women’s basketball team’s losing-streak extended to six games in its 70-63 loss versus Loyola Marymount on Friday, the Gauchos have made progressive strides staying within games but currently lack the consistency in securing wins. 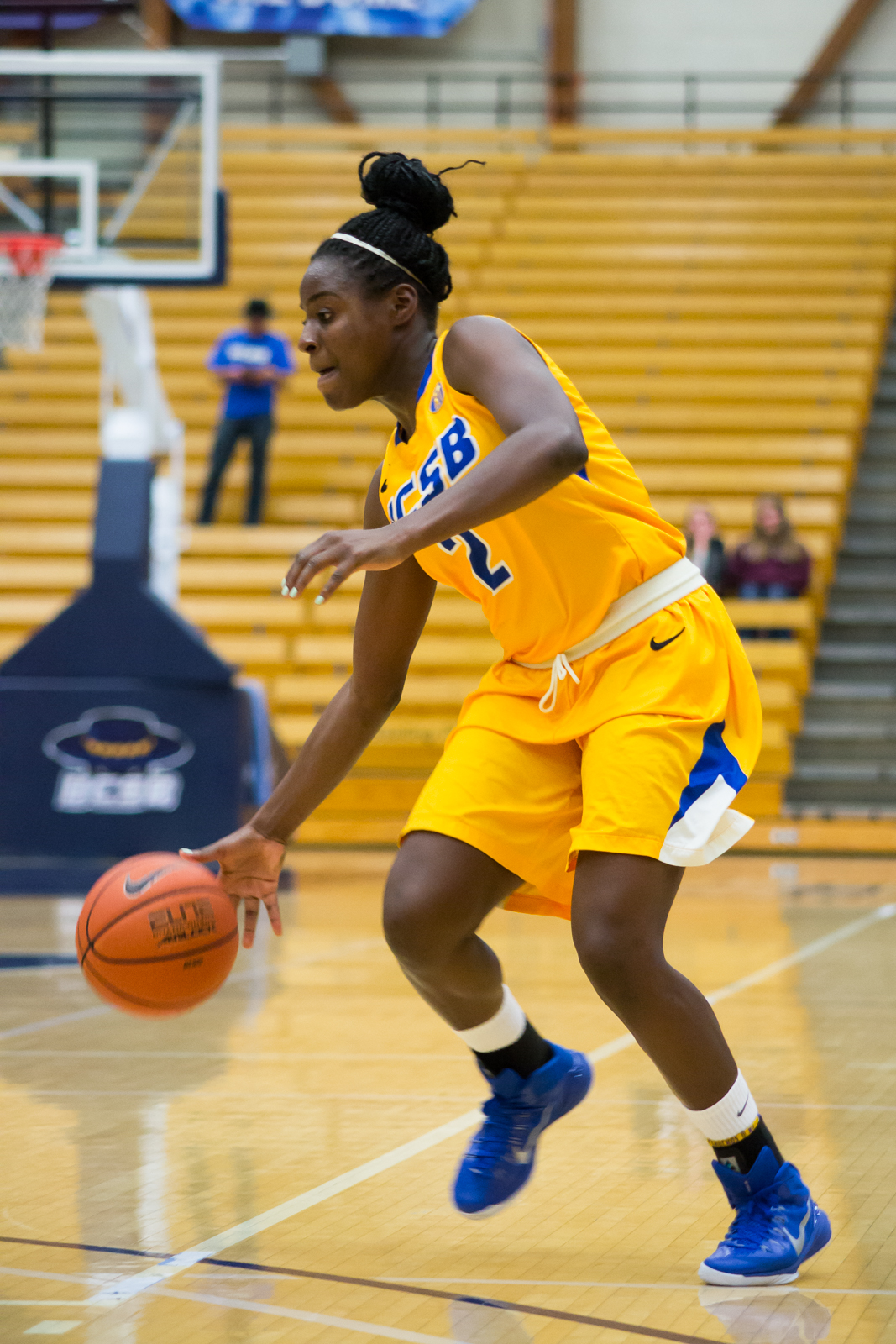 “We’re not giving in,” Head Coach Bonnie Henrickson said. “You come into our practice and you wouldn’t walk out saying ‘I bet their record is 1 and whatever.’ We feel like we plug in one hole and then one opens to so we have to fix that. There’s a tremendous amount of pride in that locker room, they want it.”

Despite enduring another defeat, Friday marked the UCSB debut of Je Zhé Newton, a transfer from Central Arizona College. Now healthy after an injury that held her out for the first eight of the team’s nine games, Newton played just 17 minutes and finished with five points, six rebounds, one block and steal.

“She’s [Je Zhé] a kid who can handle people being physical with her and she can give it back,” Henrickson said. “It’s nice to give Kali a little break from that because she gets everybody’s biggest, strongest kid. To her credit she has paid attention while she’s been out. For a kid that can keep somebody behind her, we have to throw her the ball more and get her enough touches.”

Additionally, it was a season-best performance for the Gauchos at the free throw line as they shot 22-27 from the stripe for an 81.5 percentage.

After its sixth consecutive loss, Santa Barbara is now 1-8 overall. As for LMU, it was the Lions first win on the road as they improved to 3-5 on the season.

Both teams had a total of three players score within double-figures, but it was UCSB’s 19 turnovers that aided the Lions’ second half improvements. After just seven turnovers in the first half, UCSB turned the ball over 12 more times while seven occurred in the third quarter alone. The Lions capitalized on the Gauchos’ mistakes, outscoring UCSB 28-10 in points off turnovers.

LMU’s prowess on defense aided its 50 percent shooting performance in the second half, propelling the Lions in their win over UCSB. Despite being held under a field goal percentage of 30 percent in the first half at 28.1 percent, LMU emerged in the second half. Particularly, the Lions’ 21-10 outscoring of UCSB in the third quarter was their most pivotal stretch in their offensive resurgence.

A 10-2 run early in the first quarter helped LMU earn a 12-6 lead. UCSB made 14-15 free throws in the first half and made four of its first six points at the free throw line.

Yet, providing an offensive stimulus for UCSB was senior shooting guard Jasmine Ware. Prior to Tuesday’s game versus Santa Clara, Ware had been in the Gauchos’ starting lineup but came off the bench in their contest against the Broncos. She only played for 10 minutes and had zero points.

On Friday, Ware played 27 minutes and was the primary catalyst for UCSB’s 27 bench points. She shot 6-13 from the field, 2-3 from long distance for 18 points and led UCSB in rebounds with seven, scoring 15 points in the first half. Her individual 8-0 scoring run in the first quarter gave UCSB a 14-12 lead as it extended its lead to end the quarter up by two, 18-16.

A layup by freshman forward Kali Jones gave UCSB it largest lead of five at 35-30 with 1:06 remaining in the first half. A late layup by LMU’s senior guard Sophie Taylor reduced the Gauchos’ lead to three as they went into halftime with a 35-32 lead.

Guiding Loyola Marymount’s resurgence in the second half was senior guard Deanna Johnson. She scored 12 of her team-leading 17 points in the half and finished with a 5-8 shooting night and was 6-6 at the free throw line. Johnson’s jump shot was the Lions’ first field goal in the third quarter, sparking their 7-0 run to take a 39-36 lead.

However, matching Johnson’s performance was sophomore guard Makala Roper. She scored 16 of her 18 points in the second half as back-to-back three-pointers by her and Ware created the Gauchos’ 7-2 run and regained their lead at 44-41.

In spite of this scoring run, Santa Barbara shot 8-27 in the second half for a 29.6 field goal percentage after a 41.7 percentage in the first half. The Gauchos were held scoreless in the last 2:11 of the third quarter while LMU erupted for a 10-0 run and earned its largest lead of 53-45 to close the quarter.

Still, UCSB managed to trim this deficit behind an 11-point performance by Roper in the fourth quarter. She scored four of the team’s six points to begin the quarter, a 6-0 run that brought UCSB within two 51-53.

The Gauchos showed their stoutness on defense, holding LMU scoreless for nearly half the fourth quarter. It wasn’t until the 6:18 mark that the Lions scored their first field goal but it was the beginning of a 6-2 run that gave them a 59-53 lead, causing a UCSB timeout.

After 19 points on Tuesday, freshman guard Coco Miller couldn’t follow up her play with six points and four turnovers on 2-11, 1-8 shooting from beyond the arc on Friday. However, her one three-point field goal came at the most crucial time as she drained the long-range shot with 1:04 remaining in regulation to bring UCSB within a three-point deficit of 61-64.

LMU’s 6-2 run in the game’s last minute secured its 70-63 win as the Gauchos looked stagnant on offense and allowed a go-ahead coast to coast layup off an inbound to end the game.

UCSB will be on the road for its next three games, spending the majority of its time in Louisiana facing LSU on Sunday, Dec. 13th at 1:00 p.m. in the Maravich Center and Louisiana-Lafayette on Tuesday, Dec. 15th at 9:00 a.m. in the Earl K. Long Gymnasium. The Gauchos will have a chance to redeem Tuesday’s loss to Santa Clara in a rematch on Friday, Dec. 18th at 6:00 p.m. in the Leavey Center.