The Daily Nexus
Opinion
Musings on Chanukah from a Non-Religious Jew
December 3, 2015 at 8:00 am by David Rubinstein 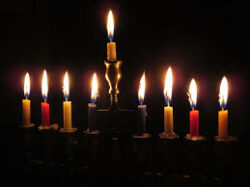 There is a joke in the Jewish community that we do not have happy holidays. They all follow a somewhat similar trajectory: they tried to kill us, they didn’t get us all and/or it took longer than they thought; now let’s eat. We have a rather morbid sense of humor.

There’s some truth to this matter. Chanukah, as most people know, is the festival of lights. The history behind it is slightly less known, however. The much shortened version is this: The Jewish people were enslaved by the Syrian/Roman Empire, who tried to force the Jewish people to worship their Gods. The Empire looted the city and The Temple upon hearing their refusal to pay taxes and worship their Gods, forcing the Jewish people to the hills. The Jewish people led a revolt and took over the city and the surrounding area soon after this, however. Upon taking the city, they built a new Altar to the martyrs killed and lit a menorah. All they had was a small cruse of pure olive oil bearing the seal of the High Priest Yochanan, which was sufficient to light the menorah for only one day. By a miracle of God, it continued to burn for eight days until new oil was made available. That miracle proved that God had again taken His people under His protection.

The Jewish people’s history follows this pattern — we were enslaved, colonized, had our possessions stolen from us, etc. But here we are.

So when I look at Chanukah and when I think of my Jewish Identity I can’t help but think of this history. When I light the menorah and when I play dreidel, I do so knowing many of my ancestors died and killed for the ability to do these simple, seemingly trivial actions.

I do all of these things and more as a Jew. I don’t choose to comb my hair as a Jew, nor do I think of my Jewish identity when I study physics, yet I do both those things as a Jew.

I do these things with the knowledge that my living is an act of resistance. My ability to eat, to sleep, to brush my hair, to (not) shave my beard, to blow my nose, to do homework, to hang out with friends, to listen to music, to love a woman: These are all passionate acts of resilience and resistance that I do as a Jew.

So even though you will not catch me reading the Torah, going to Temple or even believing in a God, you will hear me referring to myself as a Jew. And when I think of the morbid joke about our holidays, I think of it with pride. And I laugh as a Jew.