The Daily Nexus
Music
Azeem X Underbelly Return to the Batcave
December 3, 2015 at 9:42 am by Artsweek Editor 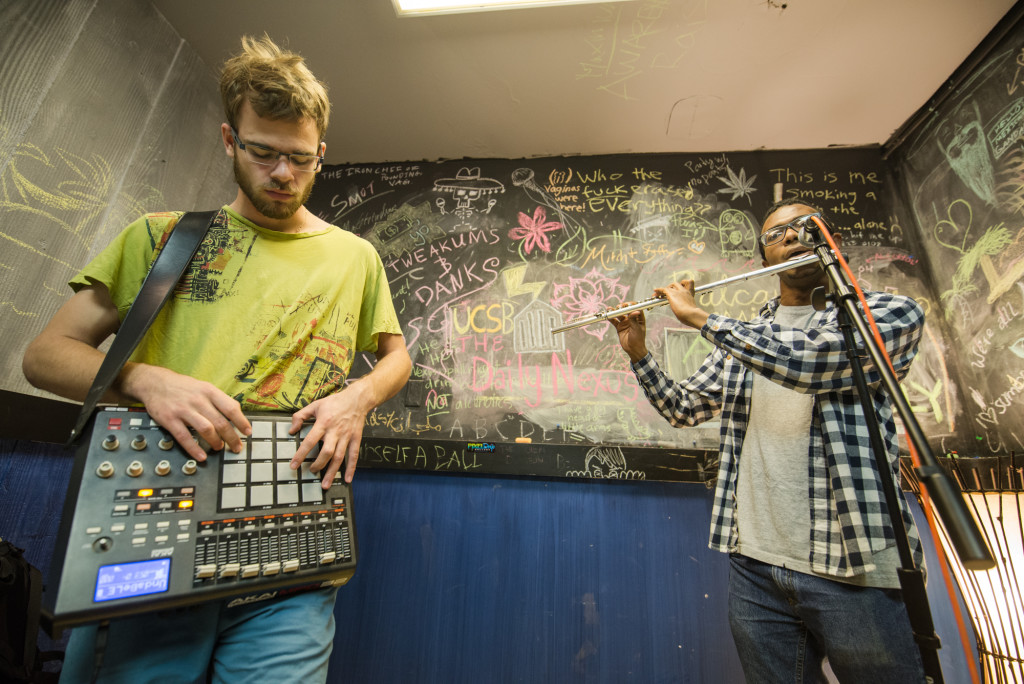 At the tail-end of last Spring quarter, UCSB graduating senior flautist Azeem Ward had reached astronomical due the viral explosion of his “Senior Flute Recital” Facebook event. In less than 24 hours, Ward’s event, which had received over 200,000 invitees, caught the attention of virtually every smartphone screen in the nation, the UK and Jimmy Kimmel’s writers.

In an effort to convert this haphazard incursion of internet publicity into a more concrete career propellant, the flautist-turned-meme turned to fellow UCSB beatmaker Timmy Linetsky aka DJ Underbelly. Together, the duo created a dreamy Jazz-Hop mesh of ephemeral high-register flute runs with a cloudy synth bounce spine.

When Azeem X Underbelly concluded the Batcave Session’s 2014-2015 season, they were about to embark on an unplanned tour of the United Kingdom, with the musicians serving as de facto booking agent and manager—an ambitious exploit for musicians who had previously performed neither duty. Well, they’re back. After a five week tour spanning across 12 cities all over Britain and Scotland, the pair has returned stateside to their UCSB alma mater to talk UK tour, future musical endeavors and returned to our chalk-wall cove to kick-off the first Batcave Session of the season.

Alex Bocknek: How many shows did you make on tour? How about ticket sales?

AB: What were the general feel of your performances?

AW: Some of our performances were in the realm of 1.5k.

TL: The reception…well we found our sweet spot was with 300-500 people audiences where people were sort of gathered around us, where people still actually wanted to listen to the music, whereas, in the huge commercial shows, people just want to rage their faces off. If you place something that’s not Top-40 in those sets…you’re fucked. But, at the same time, it’s really fun to be able to command a crowd of that size.

AB: Were these the biggest shows you’ve played to date?

TL: Well, I’ve played the Low End Theory Festival in LA this year. It was about 3 or 4 thousand.

AW: 1,500 was the biggest I played to in the UK. But when I had my recital, we had 55,000 people logged into the livestream. The venue is actually only 100 seats, but we had people standing up. So, it was probably about 150 people there.

AB: Where did you sleep and how did you get around?

TL: Sometimes, we would get lucky and the venue would provide us with a combination. They would provide us with a really swanky hotel to stay in and we felt like rockstars, but for the most part we would just stay with students at their places. They would house us and feed us, and, yeah, they were all really awesome and nice. We met so many people.

AW: We’d normally figure it out the day before. We’d require the venues, for about 85-90% gigs that they’d provide some sort of accommodation, and since a lot of the organizations were student-run, they couldn’t afford swanky hotels.

TL: Sometimes, they had really nice beds that we each got. Sometimes, we’d have to share a bed. Sometimes, I’d make Azeem sleep on the floor, because I’m a bitch. You know, I’m a princess, so I want the bed. We got by.

AW: There was this one party I went to in St. Andrews. Getting there, they were calling me on Facebook, “Yo Azeem where you at?” “Tell me where your at so we can come get you.” We finally get there. It’s a super posh party. The moment I get there they just start screaming, “Azeem’s here! Azeem’s here!”

TL: The moment we walked in they just started grabbing him like he’s Justin Bieber or some shit.

TL: Azeem is really nice and doesn’t turn down people who ask for selfies. At this one party in London, it was just really really bad. So what I did was every time a new person asked for a selfie, I would get in the picture and cover his face with my face so that they would get too frustrated and leave.

AB: How do you like your newfound stardom or do you prefer anonymity?

AW: I like the stardom to a point where it’s like “hey I know about you and I want to know more about your life.” But what I got mostly was, “hey how was the recital?”

AW: We had a lot of interviews in Nandos, as well.

AB: How do you like going from your massive celebrity in the UK to the more casual following in the States?

AW: It’s nice. You have more time to do what you want to do and have to do. It’s a peace of mind sort of thing. A lot of artists take the time to record and prepare for something like that. Whereas, we didn’t really take the time to prepare a UK tour like we did.

TL: Yeah, we didn’t have the time. We had to put it together really fast.

AW: Super fast. It’s especially really unusual for an artist to not have any recorded music or anything like that, just going and tour somewhere.

AB: Last we spoke, Azeem was intending to go to Iowa for grad school. What does that mean for your collaboration?

AW: It seems like our solo stuff is more important to us.

TL: We’ve gone this far without anything recorded, so far. As a personal goal, I would really want a release for us. Because we didn’t tour behind an album, people only knew Azeem as a meme. So we were basically a novelty act. When we tried to push past top-40 and try to do something more musical and try not to be a novelty act, the promoter would tell us to get off stage.