The Daily Nexus
Sports Blogs
Osweiler to the Rescue in Denver?
December 2, 2015 at 12:28 pm by Jorge Mercado

Peyton Manning vs. Tom Brady; a game NFL fans are always excited to see. A duel between two all-time great quarterbacks that have re-written the record book so many times, your brain might explode simply by thinking about it. 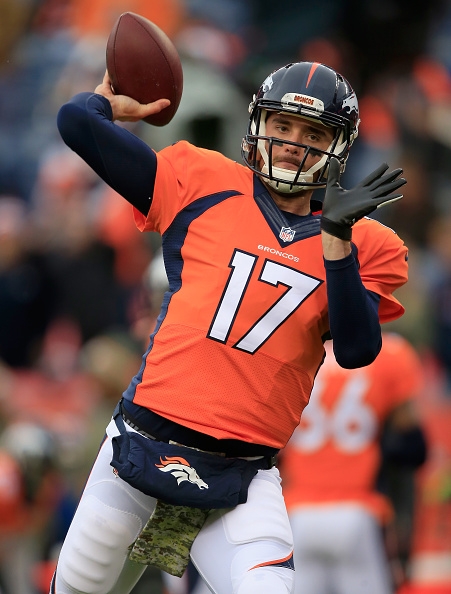 Week 12 of the 2015 season was supposed to mark the 17th time the two legends faced off against one another. Before the start of the season, everyone was excited for the matchup with most analysts even predicting the two elite QB’s to meet in the AFC championship game in late January.

However, the week leading up to the game was anything but exciting. Not only was Manning not playing due to injury, but also because a lot of fans believe even if he did play, it wouldn’t have been up to par with past games because it appears as though father time has caught up to Peyton Manning.

It’s no secret that the 39-year-old quarterback is having his worst year statistically. Currently, Manning has career lows in passing yards and touchdowns through his first nine starts of any season. His current quarterback rating of 67.6 is the worst of his career. His nine touchdown to 17 interceptions ratio is the worst of his career and his total QBR ranks 27th in the league at 45.0, another career low.

The five-time MVPs’ season went from bad to worse when he was knocked out of action against the Kansas City Chiefs in week 10. Ironically enough, in that game Manning broke Brett Favre’s all-time passing yards record, throwing for a career worst 35 yards.

If any game could’ve gotten Manning out of his funk, it would’ve been against his greatest rival Tom Brady at home in Mile High Stadium. Instead, NFL fans were subjected to watching the Broncos backup quarterback Brock Osweiler try to beat the unbeaten Patriots.

However, fans realized by the end of the night that the Peyton Manning era might be over and the new era is set to begin.

Down 21-7 in the fourth quarter, the second string QB led the Broncos on a 17-point fourth quarter comeback which helped propel the Broncos to a 30-24 overtime victory, handing the reigning Super Bowl champions their first loss of the season.

Before the season started, no one would’ve ever believed Osweiler would be capable of such a feat. Yet with two games under his belt now, it seems as though he is a viable option to lead the Broncos’ offense for the rest of the season.

One thing that makes Osweiler such a great option is that he does not turn the ball over. In his two starts, the 25-year-old has only thrown one interception. Manning has thrown at least one interception in every game he has started this season.

Another reason the Broncos might look to stick with Osweiler is because of the rejuvenation of the Broncos’ dual-back rushing attack in his two starts. Since he took over, the Broncos have posted their two best running totals of the entire season with 170 rushing yards against the Bears and 179 against the Patriots.

In Manning’s nine starts this season, running back CJ Anderson only rushed for one touchdown all season. He had two against the Patriots alone with Osweiler at the helm, including the game-winning 48 yard touchdown in overtime which was actually audibled by Osweiler—yet another great decision by the young QB.

In his first start of the season against the Chicago Bears, Osweiler led his team to victory posting a 78.2 total QBR; a feat Manning has only surpassed twice this entire season.

Overall, Osweiler hasn’t been amazing, but he has proven he can run Head Coach Gary Kubiak’s offense well and that he is cool under pressure. One potential problem the inexperienced quarterback has is getting rid of the ball.

He has been sacked eight times over the last two weeks, most in the NFL during that time. Yet, that error could be forgiven as most young QBs learn to get rid of the ball better with more experience.

No one really knows when it’s time to replace a legend, but Denver will have to answer that question when Peyton is healthy. At the end of the day, whether the Broncos decide to go back to Manning or not, it’s clear that the Osweiler era is ready to begin, and it’s here faster than a lot of us expected.

It’s ironic to think that Peyton Manning’s second Super Bowl ring, one that has eluded him for so long, might come with him standing on the sidelines, yet that is the reality we are currently living in.

The end of an era is always bittersweet. As we see the rise of the next batch of talented players such as Cam Newton, we must also see the demise of the legends like Peyton Manning.

Manning is one of the best quarterbacks of all time –maybe even the best if you ask anyone outside New England—which is why it is so hard to believe we will never see him again in all his glory.