The Daily Nexus
Sports
Gauchos Suffer 62-60 loss to UTGRV on Game-Winning Layup, Prepare for Wyoming and Pepperdine
November 25, 2015 at 4:30 pm by Sean White

A game-tying layup by senior forward Kendra Morrison with seven seconds remaining in regulation knotted the UCSB women’s basketball team with the University of Texas- Rio Grande Valley at 60 apiece. However, subduing the basket was a game-winning layup by Vaqueros’ junior forward Mary Savoy for the 62-60 win on the road. 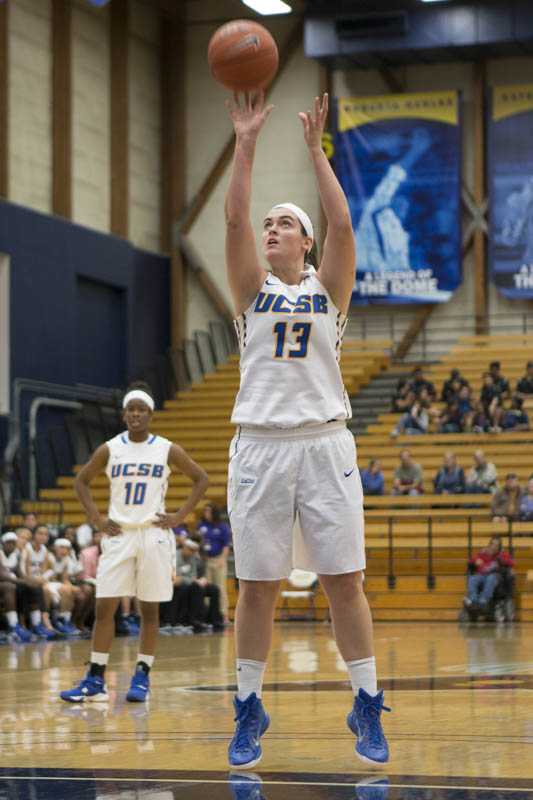 “I said don’t celebrate, get back,” Head Coach Bonnie Henrickson said. “I said if we miss, we’re going to foul. Protect the rim, make that kid make a pass at least. But we don’t lose it there. We lose it in all those stretches, we just kind of fall asleep and don’t attack. We didn’t rotate and protect the rim, it shouldn’t have never been.”

Despite allowing an 11-0 run to open the third quarter and trailing 36-45 entering the fourth quarter, Santa Barbara nearly forced overtime in its comeback effort. Twenty-one points off the bench by sophomore shooting guard Makala Roper guided the team’s come-from-behind attempt. Her 21 points were a game-high in Thursday’s contest and were two points shy of her career-high of 23.

Savoy’s late basket handed the Gauchos their second consecutive loss, making them 1-4 overall while it boosted UTRGV’s overall record to 4-2.

In just five minutes of play, she scored six points on 3-4 shooting. The Gauchos’ success on offense eventually led to the Vaqueros playing a “one-man” full court press. This caused some problems for UCSB when inbounding the ball but was not the primary challenge in facing Rio Grande Valley.

“It wasn’t a full-court pressure,” Henrickson said. “The inbounder has to just let it go. You’re just letting one guy dictate the flow of the game. We looked better in the second half but we struggled in the first half with it. Not that we turned it over, but we didn’t get much flow and rhythm.”

UCSB had a season-low 12 turnovers, but even more problematic was the Gauchos’ foul trouble. Freshman forward Kali Jones fouled out in the fourth quarter with 4:09 remaining in the game in addition to a total of five UCSB players had two or more fouls.

UTRGV capitalized on UCSB’s abundance of fouls, going on a 10-0 run to take an 11-8 lead to end the first quarter. Prior to fouling out, Jones started to establish her presence in the paint in the second quarter. She scored four of her six points in the quarter and finished the game 3-4 from the field.

Jones’ minimal production in the game helped jumpstart the Gauchos outscoring the Vaqueros 34-18 in the paint as Durr, Roper, Ware and Morrison carried the workload down low while Jones played just 18 minutes.

In spite of its 37.5 shooting and 14.3 three-point percentages, Santa Barbara’s consistent drive to the paint helped it go into halftime with a three-point lead of 30-27.

However, UCSB’s foul trouble proved to be costly in the third quarter. Having to send Jones, Ware and Jemerigbe to the bench nearly two minutes into the quarter, the Gauchos’ reserves were fatigued and it was evident as the Vaqueros outscored UCSB 18-6.

Scoring eight points in UTRGV’s 11-0 run was junior guard Shawnte’ Goff. Despite an off first half in which she had four points all at the free throw line, she finished the game with 15 points on 4-10 shooting, 2-3 from long range and recorded three steals.

“We had some momentum going into the locker room but came out flat,” Henrickson said. “We made some energy plays but that wasn’t until the last four minutes. It’s not who you play, it’s not where you play but how you play.”

Still, UCSB’s bench outscored UTRVG’s 37-10, scoring 31 of these points were Roper and Morrison. In the last 3:26 of the quarter, the two scored the team’s last 11 points.

Despite Morrison’s game-tying layup, UCSB did not get back on defense quick enough and was beat by Savoy going coast to coast for the game-winning layup.

In the 3:40 mark of the third quarter, Durr suffered an undisclosed injury while committing a foul.

UCSB will be on the road this Friday, Nov. 25th at Wyoming at 6:00 p.m. in Arena-Auditorium. Wyoming is 2-1 after its 61-56 overtime victory over Big West counterpart Cal State Fullerton on Thursday. Santa Barbara will continue its road journey against Pepperdine this Sunday, Nov. 29th at 1:00 p.m. in Firestone Fieldhouse. The Waves are 1-4 after their loss 94-61 loss versus Alaska-Anchorage on Thursday.