The Daily Nexus
Science & Tech
The Science of Protein Aging
November 24, 2015 at 6:00 am by Tara Sharifi 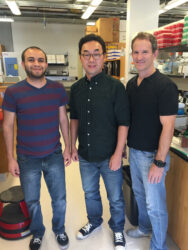 Just as humans age externally, internal physiological processes require the function of new and healthy cells containing proteins that age over time. Biomedical researchers at the Center for Nanomedicine at the University of California, Santa Barbara have made a breakthrough in the discovery of a mechanism that regulates the aging of secreted proteins.

Jamey Marth, Director of UCSB’s Center of Nanomedicine, focuses on the field of glycobiology and led his team to the discovery of a fundamental cellular process.

“Understanding how sugar modifications of proteins affect protein function is something Dr. Marth has worked on for many years. This study is an outgrowth of previous work towards testing the hypothesis ‘what if these modifications are actually used in the body to determine when proteins need to be removed from circulation,’” Douglas Heithoff, project scientist in the Marth laboratory, said.

“All proteins certainly do not have the same life span; in this study we’re talking about the life span of secreted proteins — proteins secreted into the blood. Different proteins are going to have different life spans according to their function,” Heithoff said. “There are two factors to consider: protein abundance and protein activity. By reducing abundance of certain proteins, the end result can be altered cellular outcomes and functions.”

Although it may seem difficult to appreciate the significance of this aging mechanism, it is important to consider the consequences if proteins did not have this function. An overabundance of aged proteins could lead to malfunction of certain biological processes due to buildup of these proteins.

“This buildup could tie up the machinery that normally recycles proteins. It is all about a cell’s ability to modulate protein levels as needed by increasing the amount of certain proteins to replace the aged ones,” Heithoff said.

This study allows scientists to understand that cells have a mechanism to regulate protein turnover — when this function is operating correctly, a healthy cell is present. Changes in this mechanism leave room for potential diseases. According to Heithoff, the findings from this research are significant in the world of bioengineering, because at the interface of health and disease are glycoproteins in blood circulation.

“Dr. Marth’s lab is currently studying sepsis, diabetes, as well as inflammatory bowel disease, and these are all disease processes that have a link to glycobiology. This mechanism is going to translate to discoveries of how certain diseases occur,” Heithoff said.

The findings from this study will allow scientists to better understand disease processes at the molecular level. As a result, the progression of diseases can be monitored and new treatments will be introduced to the medical world.