The Daily Nexus
Sign of the Times
Why America Should Do Right by Refugees
November 23, 2015 at 6:00 am by Calvin Chiu

When reports of the seemingly explosion-proof Syrian passport found at the scene of the Paris attacks surfaced, I had a dreaded feeling that the dialogue on resettling refugees would take a turn for the worse. Sure enough, a wave of paranoia and misguided rhetoric has swept the country over the past week. A recent poll showed that over half of all Americans oppose resettling Syrian refugees in the United States.[1] The governors of 31 states, almost all of them Republican, have publicly refused settlement of any refugees from that war-torn country into their respective states, deeming it a threat to security,[2] and they are not alone. Many of the presidential candidates have expressed similar views. Ted Cruz, in a recent speech, called the the administration’s plan “the height of foolishness.”[3] Ben Carson, one of the current frontrunners, advocated “terminat[ing] all public funding for ongoing federal programs that seek to resettle refugees from Syria into the U.S.”[4] Even John Kasich, perhaps one of the most moderate within the GOP field, steered hard to the right and said, “the last thing we want to do is bring them into Ohio, or bring them into the neighborhood, right where we live.”[5]

Yet, such a fear stands contrary to precedents in history and the opinions of experts. Despite the best efforts of opponents to paint it as such, the refugee application process is perhaps the worst possible method a terrorist would use to gain entry into the United States. More importantly, such an abandonment of our responsibilities in this refugee crisis on the basis of unfounded fear betrays the best values of this country and undermines our credibility around the world. 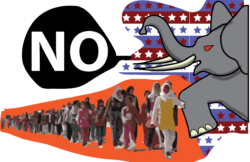 Critics claim that the refugee resettlement system contains gaps, through which they claim terrorists can slip in. But is that reflected in reality? Approximately 784,000 refugees have resettled in the United States after Sept. 11, 2001. Of that enormous number, a whopping three were arrested on charges of sending aid to terrorist groups, and none of them posed any credible risk to national security.[6]

Refugees go through the strictest security checks of any group of individuals entering the United States.

Others point to the Tsarnaev brothers, whose family entered the United States and applied for asylum, as examples of the threat posed by refugees. But the Tsarnaev brothers were less than 10 years old when they arrived.[7] To argue that a screening system is unsound on the basis that it could not predict a terrorist act that two kids would commit over a decade later as adults is ridiculous.

Refugees go through the strictest security checks of any group of individuals entering the United States. Applicants must first apply for refugee status through the UNHCR (United Nations High Commission on Refugees) or the State Department before they can enter the process. After acceptance, which is by no means guaranteed, they then go through a battery of background and security interviews and biometric checks by the FBI, a process which can take up to three years.[8] Even then only 50 percent of those applicants are granted approval to be resettled in the United States.[9] Such levels of scrutiny are unprecedented for any other person attempting to enter the United States, and presents a hugely effective barrier for any security threats. Current Director of National Intelligence James Clapper concurs, acknowledging that although he does not “put it past the likes of ISIL to infiltrate operatives among these refugees … we do have a pretty aggressive program for those coming to this country, for screening their backgrounds.”[10]

We have a moral obligation, as the world’s most powerful nation, to do all that we can to give refuge to those families, torn apart by a barbaric civil war, who have lost so much.

Under the 1951 Convention on Refugees, of which we are a signatory, the United States has a legal obligation to accept and protect refugees, and throughout history we have done so. We accepted 120,000 refugees from Indochina after the Vietnam War, 650,000 from Castro’s Cuba[11] and even 154,000 from the Soviet Union, our geopolitical adversary for much of the second half of the last century.[12] In many of those instances, such a policy was immensely unpopular among the public. In 1975, as we accepted refugees from Indochina, public approval hovered at 36 percent, with over half of Americans thinking that they ought to be kept out.[13] Yet the passage of time and history has vindicated that decision and the others that have brought a total of three million refugees into the United States since 1975.[14]

We have a moral obligation, as the world’s most powerful nation, to do all that we can to give refuge to those families, torn apart by a barbaric civil war, who have lost so much. What message does it send to the world when we refuse entry to the tired, the poor, the huddled masses yearning to be free? How can we claim to be a champion of human rights when we refuse to accept those who have fled from torture and massacres, barrel bombs and executions?

What our current situation requires is leadership that stands above public opinion, that does not succumb to the fear-mongering which colors our discourse today. While such appeals may pass for good politics, it makes for terrible policy.

that one of the reason for this trend is that there is aledray now in Sweden a large Syrian community wheres in Finland it has been almost non existent, until now. The other, more visible reason is that the current government has tighten up the migration policies. This has been due to the radical increase in popularity of the national party movement and its influence on the general attitudes on these issues.