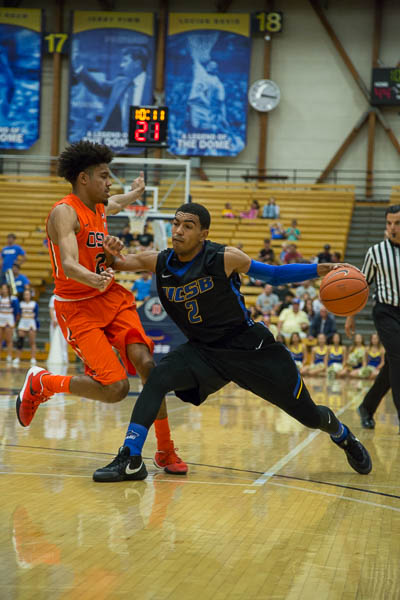 Gabe Vincent tries to work his way past the defense. Dustin Harrs/Daily Nexus

The UCSB men’s basketball team trailed by just six early in the second half in its home season-opener against Oregon St. on Saturday, but went cold at the wrong time. The Gauchos shot just 8-30 (26.7 percent) from the field and 1-12 (8.3 percent) in the second half on their way to a 71-59 loss.

Santa Barbara falls to 1-2 in the young season while the Beavers went undefeated on their two-game weekend road trip to improve to a perfect 4-0 start for just the second time since 2000.

Senior guard Gary Payton II filled up the box score once again for his team with a game-high 21 points on 8-13 from the field and 3-4 from three-point range. The reigning Pac-12 Defensive Player of the Year also finished with seven boards, four assists and two steals.

An 8-2 run out of the gates by Oregon St. didn’t bode well for the Gauchos, who have had relatively slow starts in each of their first three games. UCSB answered with a 7-0 run, taking the lead after a pair of free throws by senior guard Michael Bryson, but the home side was only able to hold on to a 9-8 advantage for 12 seconds for its only lead of the day.

The Gauchos kept it close before a three-pointer by freshman guard Stephen Thompson Jr. gave the Beavers a 43-35 lead heading into halftime. Oregon St. shot lights out in the first half, going 8-10 on three-pointers through 20 minutes of play.

Going back to the final minutes of the first half, Oregon St. went on a 15-2 run to help put the game away.

From there, UCSB was unable to find much of a flow on offense, finishing the night shooting 33.8 percent from the field and an ugly 18.2 percent from three.

It was another disappointing game for sophomore Gabe Vincent, who finished with just three points on 1-8 shooting. Bryson and senior forward John Green finished with similar numbers, both shooting just above 30 percent to score 14 and 16 points, respectively, to lead the Gauchos.

Senior forward Sam Beeler was one of the few bright spots for UCSB, recording his first career double-double with 12 points and 10 rebounds.

UCSB ended the game with a 39-37 rebounding advantage and turned the ball over just nine times compared to the Beavers’ 13, but shooting proved to be the difference. As a team, Santa Barbara has a field goal percentage of just 36.2 so far this season and are a miserable 23.4 percent from deep.

Missing the efficiency of their focal point from the previous three seasons in Alan Williams, the team’s remaining big playmakers will need to step up their game moving forward for UCSB to have more success. Reigning Big West Freshman of the Year Gabe Vincent is hitting just 25.8 percent of his shots playing alongside fellow guard junior Eric Childress, who is also shooting just 31.3 percent.

Next up for UCSB is a mid-week road game at San Francisco state this Wednesday at 7:30 p.m.