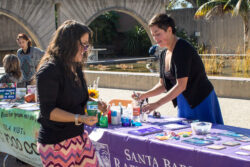 From 11 a.m. to 2 p.m., more than 12 organizations, including I.V. Food Co-op, C.A.P.S., RHA, C.A.R.E., A.S. Food Bank, Student Health and EDAS, tabled to educate students and encourage dialogue about mental health. Attendees participated in four activities including jumping on a sheet of bubble wrap covered with stigmatizing comments called “Stomp Out Stigma” and filling a sandbox with sand representing different illnesses. Participants could also write encouraging comments on a wall called “Stigma Free Wall” and on a mirror called the “Body Positive Mirror” while listening to a live music performance by UCSB alumnus Erisy Watt.

“The Stigma Free sandbox … is where we have five different colors of sand, each corresponds to a different phrase regarding stigma and mental health, like, ‘I support those with mental illness,’ or, ‘I suffer from mental illness,’ and stuff like that,” Boomer said. “They make a little plastic container filled with the colorful sands, and they decorate it with seashells so they have a little memento to take home today.”

Fourth-year economics and accounting double-major and COSWB co-chair Kim Liao said COSWB got involved with the event to increase their focus on students’ mental well-being.

“We realize that mental health is an issue for many students here, and there’s a stigma to talk about it, to reach out,” Liao said. “So I think it’s really great that we get to participate in this and co-sponsor this event and spread more awareness for mental health.”

Liao said COSWB created a board of Polaroid photos from the event, showcasing students holding pre-made signs to be displayed in Pardall Center.

“We put Polaroid pictures up of people holding a sign that says … ‘I’m not defined by my insecurities,’ or, ‘I don’t live in my body image issues,’ things like that. There’s no stigma to put it out there and to tell everybody else that you’re not alone,” Liao said. “Some people just put really nice quotes in there that brightens peoples’ days, like, ‘You’re beautiful,’ and, ‘You’re loved.’ I think it’s a really sweet thing.” 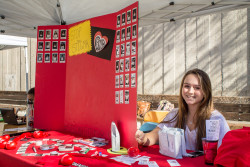 According to second-year psychology major Marisa Jones, one in four Americans will struggle with a mental health issue within a year, and one in two will within their lifetime.

“A lot of people who don’t take anxiety seriously, [they often say] ‘Oh, depression is just in your head,’ [they] treat it as something that you can just snap your fingers and fix and say ‘Just smile and your depression will go away,’” Jones said.

Jones said while she was speaking to attendees about kids struggling with depression, someone began to say the phrase, “if I had a normal kid…”

“That just broke my heart, because there are children out there who do have mental illnesses, and so that’s a kid starting at 10 years old being told that they’re not normal,” Jones said.

“We have so many thousands of people on campus, and we’re trying to make sure that we can get more stigma fighters one by one and that this is a big issue and that we need to fight the stigma,” Jones said.

Santa Catalina north tower Co-President and first-year undeclared major Tom Steel said RHA tabled to teach students living in residence halls about finding help on campus and to show them they are not alone.

“We are [telling] them the safe spots around campus, different ways to get involved,” Steel said. “Different resources if you or if anybody you know is having any struggles.”

UCSB alumnus and C.A.P.S. Mental Health Specialist Gladys Koscak said the most important takeaway for attendees is recognizing how prevalent mental health issues are in society.

“It’s usually not until someone has a personal experience with someone who’s had depression or anxiety that people start to really understand what the impact of that can really be on people,” Koscak said. “People can be very high-functioning and still be struggling in silence.”

UCSB alumnus and singer Erisy Watt said she enjoys performing at events where people unite to support each other.

“Everybody who’s here really highlights the wonderful things about Isla Vista and our community, and I think that’s what this area in particular needs. It’s a strong community to just support each other and help each other and make it a more beautiful and happy place,” Watt said. “I’m happy to be able to provide sound, music for such a great community gathering.”

Watt said she performed Jack Johnson and Paul Simon songs, but most of what she played were original compositions.

Watt said one of her favorite lyrics from her original piece “Thailand Story” is “the wildness of the earth is the wildness in me.”

“I really liked playing that song because I like to spread that message that there’s the wildness that we see, there’s the forest and the ocean that are these vast things in nature on the planet. We come from the same place, so it’s fun to recognize that in ourselves,” Watt said. “Sometimes we get so ‘Oh, I have a job’ and this and that, but I like to remind myself that I’m very much a part of this wild, crazy planet that we live on.”

If anyone at UCSB is experiencing a “stigma”, the proper course is to file a civil rights complaint. Treat it precisely as one would treat racism. It is a prejudice no one should tolerate.

Harold,
Stigma is more of an abstract thing. It’s something negative, a taboo, that makes people feel like something they’re dealing with is wrong or shouldn’t be talked about. People often do not realize that they’re saying or doing something stigmatizing. Even people who work to eliminate stigma often find themselves accidentally perpetuating stigma. It’s something we all do and that we all should work on.