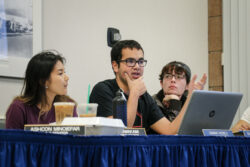 The Associated Students (A.S.) Senate met Wednesday night in the Flying A Room of the UCen to finalize reforms to the Elections Code and wrap up the first quarter of the 2015-2016 school year.

Members from several A.S. boards and commissions reported their end of quarter progress for the 2015-2016 school year.

On-campus senator and second-year economics and political science double-major Nawar Nemeh presented “A Bill to Redefine Political Parties within ASUCSB,” which outlines the plan to regulate student misconduct within political parties through the A.S Judicial Council instead of being self-regulated.

Off-campus senator and third-year political science major Stevan Abdalmalik presented “Resolution Denouncing S.A.G.E. [Student Advocacy, Governance and Engagement] without Referendum,” which would allow students to vote on UCSA fees through a system-wide referendum or to be able to opt out completely.

“The end result for this would be a system-wide referendum where every school would be voting on the student fees that will be going to UCSA,” Abdalmalik said. “That way, UCSB students won’t be paying $10 while, say, UC Merced students pay $1.30 while getting the same exact benefits and same exact representation on the UCSA board.”

Abdalmalik said although he supports S.A.G.E.’s intentions to standardize UCSA fees for all UC campuses, he does not support mandating the fees because it takes away student’s voices.

“I believe that S.A.G.E. means well. However the fact that it takes away students’ rights and autonomy to actually vote on the student fees that they will be implemented on is wrong,” Abdalmalik said. “[The bill] denounces the fact that it doesn’t include referendum as its means of collecting the funding.”

“It’s been past a month where an investigation has not been conducted,” Melgoza said. “The family still have many, many questions on what happened to Andres. No one knows.”

According to Melgoza, witnesses and family collectively drafted a set of 50 questions they demand Isla Vista Foot Patrol (IVFP) and the Santa Barbara County Sheriff’s Office answer. Melgoza said she is not satisfied with how IVFP and Community Resource Deputy (CRD) James McKarrell communicated with first responders and others involved with the incident.

“We had a meeting with our Community Resources Deputy. If you were involved in the hiring of the CRD, his position was made for students and to involve the relationship of IVFP and us students,” Melgoza said. “When I, as a first responder, along with my housemates went to him for help, that help was not available. This was because one, his role was not set up, and two, he was just unable to answer our questions.”

Student witness Jocelin Hernandez said rather than placing blame, the bill is intended to bring closure to the family and community.

“We are not working for blaming. We are working for changing,” Hernandez said. “In terms of students and this university, we need to accept our privileges and that we can use these as tools.”

Hernandez said after seeing findings of a recent coroner’s report, witnesses still have questions about the circumstances leading up to Sanchez’s death.

“After a month of waiting for the Board of County, it looks like a toxicology report. It doesn’t matter how many drugs he might’ve been on because he was still a life that deserves to be treated to our ability,” Hernandez said.

A motion to create a working group to reform election codes in order to regulate political parties year round passed.

The reformed elections code passed in a hand vote, 12 to 3 to 4.

“A Resolution in Support of Open Source Textbooks,” “Resolution Denouncing S.A.G.E. without Referendum” and “A Resolution for Andres Sanchez Investigation” also passed in a hand vote.

“A Bill to Amend the By-Laws of the A.S. Queer Commission” was sent to Campus Affairs and “A Resolution to Establish an Ad-Hoc Committee o8n on the Establishment and Integration of the A.S. Commission on Academics and Research” was tabled until the first week of Winter Quarter.

[Correction: This story originally quoted Senator Melgoza as saying “The family still have many, many questions on what happened to Andres. No one knows. I have yet to know what happened to him the four hours before his friends saw him between 12 a.m. and 2 p.m.” The last portion of this quote has been removed as it is factually inaccurate to what occurred the night of Sanchez’s death.]