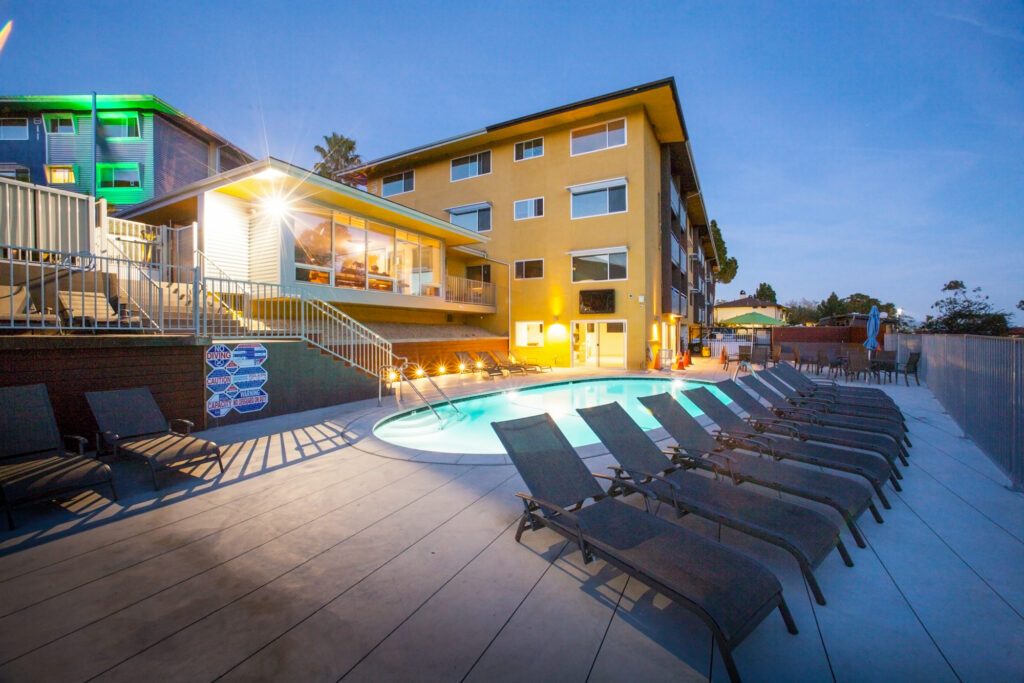 Pending approval, the plan would renovate and add to the Beach City apartments on Cliff Drive to create dorms for 1,500 SBCC Students. Courtesy of St. George

St. George plans to renovate the two-story apartments by adding a third story to accommodate up to 1,500 SBCC students. Existing kitchens will be removed for more space, and a new shared dining commons will be added. The proposal is currently in the second pre-application process under the City of Santa Barbara Planning Division.

Gullett said the Planning Commission is taking special caution with the proposal because the project is a new concept for the city.

“It’s a unique project for the city. We don’t have any dormitories, and this particular project requires a conditional use permit from the Planning Commission,” Gullett said. “So there is a lot of discretion in the review. It would be the only dormitory in the city.”

Gullett said the application process may take years to approve because the project is unique to Santa Barbara.

“City council would have to approve the zone change and land use designation change to allow for the height, and Coastal Commission would have to certify,” Gullett said. “The design would also have to be approved by the Architectural Board of Review.”

“We’ve engaged traffic and parking consultants, a project biologist and project archeologist that will look at the cultural resources that might be present on site,” Perez said. “We’re completing those technical studies that will help address many of the questions that the city has identified in relationship to this project.”

According to Perez, the project is still in its early stages and will continue to address concerns such as parking issues, noise and neighborhood compatibility.

“Ed St. George’s primary objective for this project is to create a student environment that positively interacts with the local community,” Perez said. “Hopefully together we can come up with a project that addresses community concerns and help to meet a long overdue student housing need.”

Perez said many other community colleges in the nation are facing similar housing issues because of increasing enrollment.

“I was surprised to learn that this is not a unique situation that SBCC is facing,” Perez said. “We are seeing an increase in the number of students who are attending a community college that provide excellent education.”

According to SBCC President Lori Gaskin, less than 15 of the 113 colleges in the California Community College system have dormitories.

“Dormitories are not funded by the state for community colleges and are not part of the mission,” Gaskin said. “Those [community colleges with dorms] tend to be in locations that are very remote or are servicing remote geographic regions.”

Gaskin said Beach City Apartments are close to campus but unaffiliated with the college.

“It existed for a long time, but this particular developer bought it a couple of years ago and is seeking to increase the capacity of living apartments,” Gaskin said.
Gaskin said the proposal might help with low vacancy rates and high rental fees in Santa Barbara, which have impacted student enrollment rates at SBCC since 2009.

“This fall semester we are down in enrollment by over four percent. When we reached out to potential students on why they applied but chose not to enroll, they talked about the cost of living,” Gaskin said. “The cost of living competes with the cost of going to school, so it’s really hard on our students.”

SBCC student and third-year communication major Allie Trice said it was easy for her to find housing in Isla Vista because she had friends from UCSB living in I.V.

“I chose to live here because all of my friends lived here since they went to UCSB. I didn’t really have any friends at SBCC,” Trice said. “It was convenient. It was nice already knowing people living here.”

Trice said housing in I.V. and the Santa Barbara area is expensive because of its proximity to the beach.

“When I first moved down here, I was like, ‘Wow. I’m paying for living in a double as much as you’d pay for a whole apartment where I’m from,’” Trice said. “I understand that it’s expensive because we live right down the street from the beach.”

Trice said the proposal would be a convenient option for SBCC students struggling to find affordable housing near campus.

“I would never personally do it because I like living [in I.V.],” Trice said. “But I know that would be a really good option for many students, because I know that at city college, there is a struggle to get housing there, and it’s expensive as well.”

A version of this story appeared on page 6 of the Thursday, November 19, 2015 print edition of the Daily Nexus.