The Daily Nexus
Volleyball
Gauchos Searching for Upset of No. 8 Hawai’i on Senior Night, Will Face UCI to Close Season
November 19, 2015 at 5:08 am by Sean White

For the first time in program history, the UCSB women’s volleyball team will finish a season without double-figure wins. Just two matches remain as Santa Barbara owns a 7-18 overall record and is 3-11 in Big West Conference matches. UCSB recorded a program-low four conference victories in 1984, a season in which only eight conference matches were played.

The Gauchos will attempt to upset No. 8 Hawaii in their last home match of the season. In addition to the match being the team’s home finale, it will be UCSB’s Senior Night. A total of five seniors will be celebrated before and after the match: redshirt setter Hanna Nielson, opposites Jaylen Villanueva and Britton Taylor, outside hitter Ali Barbeau and libero Shauna Klein. 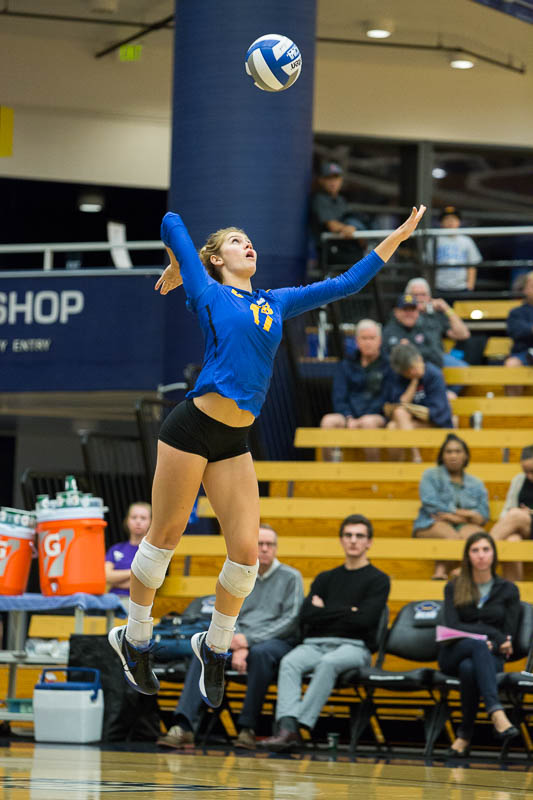 Certainly, an upset over one of the nation’s top teams would be the ideal goodbye for the group of fourth-year players.

“To have our last match together will be exciting and sad,” redshirt senior setter Hanna Nielson said. “But it’s also good to play Hawaii, it gives us an opportunity to give them an upset. Just to play as hard as we can and have fun.”

UCSB will end its season on the road, facing UC Irvine next Tuesday. After being swept by Hawaii, the Anteaters are 12-14 overall, 6-8 in conference play.

Santa Barbara began its conference schedule against Hawaii which resulted in a 3-0 sweep of the Gauchos.

With its sweep of UC Irvine on Tuesday, the Rainbow Wahine clinched the Big West Conference title outright. Hawaii is currently the only Big West team with an undefeated conference record at 13-0 and is 23-1 overall.

Its third conference title in the past four years, Hawaii earned its eighth Big West and 24th overall conference title. Since its 3-1 loss to No. 11 UCLA on Sept. 6, Hawaii has been the epitome of a championship caliber team. The Rainbow Wahine currently possess a 18-match winning streak, their longest since winning 19 straight in 2012.

Hawaii’s success this season is no coincidence as it has been one of the best defensive teams in the country. The Rainbow Wahine led the nation in blocks per set with a 3.37 average. Continuously stifling offenses, Hawaii’s .143 opponent hitting percentage ranks sixth in the nation.

With statistical rankings atop the nation, it’s no coincidence that Hawaii has dominated nearly every statistical category within the Big West.

While no team revolves around one individual, junior opposite Nikki Taylor has been the Rainbow Wahine’s best player.

The fourth player in Hawaii history to earn four Big West Player of the Week honors, the reigning conference Offensive Player of the Week has registered at least 20 kills in three of the team’s last four matches. Her averages of 4.36 kills per set and 0.44 service aces per set lead the conference while she ranks third in blocks per set with a 1.24 average.

Although the odds do not favor UCSB, the combination of playing on its home court and motivation from the occasion give the Gauchos a chance to compete versus the Big West’s best.

“We just have to be aggressive,” Head Coach Nicole Lantagne Welch said. “We’re going to have a big size disadvantage against Hawaii but we still have to find a way to use that to our advantage. Making sure that we get our hands on the block and that there’s no tentativeness in our play.”

Helping establish UCSB’s aggressiveness is freshman libero Emilia Petrachi. Due to UCSB’s lack of size, the Gauchos’ front row defense may not earn many blocks, leaving many dig opportunities for Petrachi. She recently earned her second Big West Freshman of the Week award after 20-plus back-to-back dig performances last weekend.

Another chance to avenge a loss in the first meeting presents itself in the Gauchos’ rematch against UC Irvine.

Despite Santa Barbara tying the match 1-1 after two sets, the Anteaters managed to earn a 3-1 victory. Close finishes in the final two sets, back-to-back 25-23 set victories, allowed UCI to edge UCSB for the win.

“The Irvine match was very recent,” Lantagne Welch said. “We had three two-point sets with them. All we needed was a point here and a point there, and that match is a different story.”

It was expected that freshman opposite Harlee Kekauoha, the team’s leader in kills (318), would be the leading force in Irvine’s attack against the Gauchos. However, redshirt senior outside hitter Marisa Bubica carried the Anteaters to victory with a match-high 19 kills and finished with a .341 hitting percentage.

Wins to end the season would be an encouraging finish for a team that has struggled to meet its expectations. But as the collegiate careers of five seniors come to an end, the journey of the players is most rewarding.

“It’s a big deal,” Lantagne Welch said. “Seniors grow and progress throughout their careers. It’s a special moment, seeing them come along not only as volleyball players but people.”

The Senior Night matchup versus Hawaii will begin at 7:30 p.m. on Saturday, Nov. 21 in the Thunderdome. UCSB’s last match of the season on Tuesday, Nov. 24 at UC Irvine will start at 7:00 p.m. and will be played at Crawford Court.