The Daily Nexus
Sports
Gauchos Fall at No. 15 Cal, Open Home Schedule Saturday
November 19, 2015 at 5:10 am by Michael Jorgenson

A 13-2 deficit to open the game set the tone for the UCSB men’s basketball team on Monday as it fell 85-67 at No. 15 Cal. The Gauchos will be back in action this Saturday against Oregon State in their home season-opener. 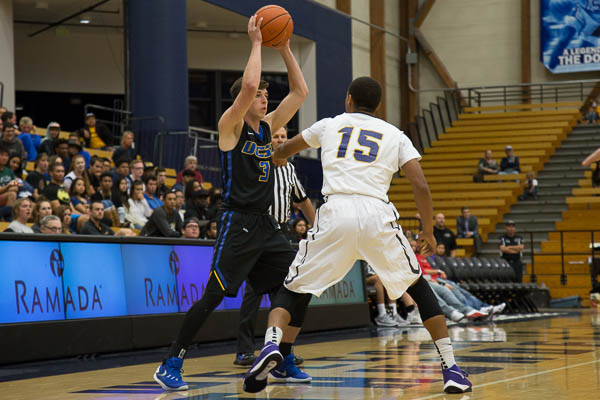 Santa Barbara enters the weekend at 1-1, having won its first game of the year in a 60-59 thriller against Nebraska-Omaha thanks to a tip-in by junior point guard Eric Childress with three seconds left. The Golden Bears are 2-0 after picking up their second straight blowout victory to open the season, outscoring their opponents by an average of 25 points per game.

“We have a tough preseason schedule every year. It’s all about building,” sophomore guard Gabe Vincent said. “We played a much better game than we did at UNO and now we’re looking to play better than we did at Cal. There’s a lot of things we’ve got to work on and shooting might be one piece but we have a lot defensively to work on as well.”

Coming off a season-opener in which UCSB shot just 34.9 percent from the field, things weren’t much better to open the game at Cal as the Gauchos missed their first seven shots before center Ami Lakoju’s got them on the board at the 14:38 mark, already trailing 8-0 prior to the freshman’s layup.

Berkeley’s junior guard Jordan Mathews came out hot, knocking down a pair of triples and converting a three-point play during the Bears 13-2 run to open the game. He went on to finish with 16 points and seven rebounds while going 3-6 from deep and 6-9 from the field.

From there, senior guard Tyrone Wallace took over as he led Cal with a 15-point first half, including 8-9 shooting from the free throw line to give his team a 47-28 lead heading into the break. The Bears shot 50 percent in the half compared to just 32.3 percent for the Gauchos.

Senior guard John Green was miscredited with a third personal foul in the first stanza, causing him to play only nine minutes before the foul was reversed in the second half.

The Gauchos had a much better effort in the final 20 minutes, outscoring Berkeley 39-38 on 14-29 shooting as a team, but the end result was never in question.

One bright spot for UCSB was the play of senior guard Michael Bryson, who played his first game of the season. The Gauchos’ leading returning scorer and rebounder scored 23 points on 8-18 from the field and an impressive 4-8 from three to lead his team on offense.

Wallace finished with game-highs of 24 points and six assists on an efficient 6-10 shooting night and 11-13 from the line to lead Cal. Freshman forward Jaylen Brown scored in double-digits for the second consecutive game, recording 17 points to go along with seven boards.

UCSB now shifts its focus to Saturday’s game against Oregon State. With two impressive 20-point wins in their first two games, the Beavers are currently 2-0 and will play Rice later tonight.

“We need to get stops,” Vincent said. “The more we can keep them out of the paint and off the free throw line like the other two teams we’ve played have been, the better off we’ll be and we can get out, run more and get more possessions.”

Freshman forward Drew Eubanks has shot a remarkable 13-15 from the field through his first two career NCAA games, averaging a team-high 16 points a night. The Beavers have a total of five players averaging double-figures to start the year, including two off the bench, and are shooting a solid 49.6 percent as a team.

Reigning Pac-12 Defensive Player of the Year Gary Payton II, son of NBA great Gary Payton, is another player shooting lights out at 55 percent. He averages 14 points and a team-leading 5.5 assists per game.

“We’re going to handle them just like we do everybody else,” Vincent said. “We’re going to play them straight up, keep them off the line and keep them out of the paint, make them shoot over us instead of around us.”

For the Gauchos, John Green has continued to show his growth coming off his first full season without missing significant time due to injury. He is currently second on the team averaging 17 points a night but has also been extremely helpful on the boards, pulling in a team-best nine per outing.

Vincent is the team’s third leading-scorer at 10.4 points per game.

The Gauchos’ first home game of the season will be played early at 2 p.m. this Saturday against Oregon State in the Thunderdome.

A version of this article appeared on page 9 of November 19, 2015’s print edition of the Daily Nexus.