The Daily Nexus
News
Fundraiser Held To Support Meagan Hockaday’s Family and #BlackLivesMatter Campaign
November 19, 2015 at 5:00 am by Vicky Munro 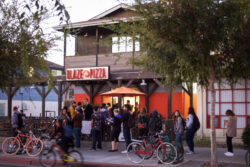 Hockaday was fatally shot on March 28 by Oxnard police officer Roger Garcia, who remains on Oxnard PD payroll. UCSB students created the support committee after hearing Hockaday’s mother, Monique Wallace, and sister, Misha Charlton, give a talk about Hockaday’s death and the #BlackLivesMatter movement in the Introduction to Chican@ Studies course on Monday Nov. 11. The fundraiser requested contributions to provide Hockaday’s family with a headstone for her grave.

“Meagan’s mother, Monique, came and talked to our class just 10 days ago, so this whole thing kind of came together in a relationship after the talk because a lot of students were kind of moved and touched by that,” Armbruster-Sandoval said. “Monique spent 45 days in a homeless shelter; she was really struggling for a while, and so, yes, Meagan died and Meagan was killed but the ramifications had a very big ripple effect throughout the whole family.”

Armbruster-Sandoval said being able to give Meagan a proper grave might help her family with the grieving process.

“I think having, unfortunately, laid other people to rest, so to speak, in terms of having a cemetery and a funeral … the decent thing is to have a headstone,” Armbruster-Sandoval said. “You want to give your loved one some final resting place, and I think right now they’re kind of not able to have closure, just on that level.”

Armbruster-Sandoval added that fundraisers like Hockaday’s are particularly important in publicizing the deaths of black women, who are often “invisible” in the #BlackLivesMatter movement.

“Mostly the names that we can think of are all men: Tamir Rice, Michael Brown, Freddie Gray, Eric Gardner — in that whole roll call of names, if you will, there’s never a black female’s voice that’s ever mentioned,” Armbruster-Sandoval said. “It’s not only black men who are being killed — black women are being killed, black queer people are being killed, all black people are sort of under attack to a certain degree … so we want to make the invisible visible.”

“About a couple weeks ago it reached 1,000 deaths from police brutality with the killer getting acquitted … It’s an important thing because it’s something that’s alive right now. It’s not stopping, it’s getting worse,” Lima said. “A lot of people hear about all these deaths, but they kind of just brush it off. People don’t care until it’s personally affected them, so that’s why we just want to bring awareness so that people can be more personally affected by this and know that it’s something that’s happening.”

Second-year religious studies major and support committee member Lizbeth Luis said the #BlackLivesMatter movement is crucial to help those who have been oppressed and ignored, but will also help everyone else.

Luis said students are already aware of the issue but should be more vocal about their opinions.

“They just don’t say much about it, and I take personal offense at that because silence is acceptance and people are scared to voice their opinions,” Luis said. “I feel like you shouldn’t be scared, you shouldn’t be penalized, you should … stand up for what you believe in.”