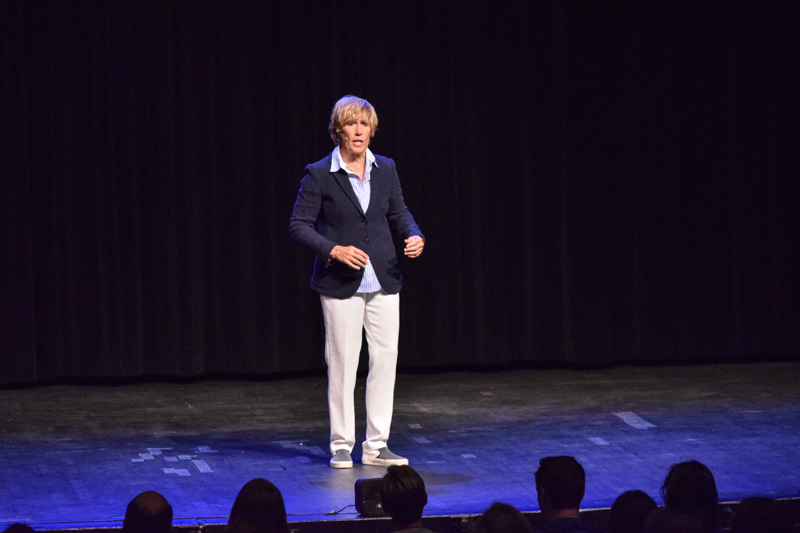 Open-water swimmer and author Diana Nyad spoke and held a signing of her new novel, Find a Way, Saturday at a UCSB Arts & Lectures event in Campbell Hall.

Nyad swam 110 miles from Havana, Cuba to Key West, Florida in a record-breaking 53 hours in 2013 at age 64, 30 years after deciding to end her swimming career in favor of sports journalism. Nyad unsuccessfully attempted the swim four times starting at age 28, with the 2013 swim being her fifth attempt in 35 years.

Nyad said she thought of Cuba as “an untouchable star with a simply irresistible mystique” throughout her childhood, early swimming career and time as a professional sports journalist and commentator.

Nyad said the most difficult part of her swim to Havana was nighttime, when she experienced “total sensory deprivation.”

“That second night I had no idea who I was or what I was doing.” Nyad said. “I thought the blackness would never end.”

Nyad said accomplishments should be viewed in terms of personal development.

“When you achieve your dreams, it’s not so much about what you get but the person you become,” Nyad said. “I don’t succeed at everything I do, but I’m living this wild and precious life of mine full throttle.”

UCSB alumna Kristina Hill, who just completed an open-water swim from the Channel Islands to Oxnard, attended Nyad’s talk Saturday. Hill said she admires Nyad and was excited to learn she would be in Santa Barbara.

“I’m just beginning to fall in love with this sport, and the fact that such an athletic and personal icon is here now in Santa Barbara is just awe-inspiring,” Hill said.

Third-year psychology major Julie Keller said the talk was “extremely motivating,” but people do not necessarily need to set goals of the same scale as Nyad’s.

“It’s important to note that these methods of extreme accomplishments and larger-than-life goal setting are certainly not for everyone,” Keller said.

Lisa Noack, a parent of a UCSB student, said she read Nyad’s book and appreciates the idea of valuing one’s journey over the final destination.

“We’re trained to get to the next level at every stage of our life and think that reaching that certain level will make us happy,” Noack said. “While brief moments of accomplishment are sweet, we forget about the deep value within the difficult, long process of accomplishing our goals. Diana truly relishes in the significance of her work while achieving what she wants.”