Friday’s 3-1 victory over Cal State Fullerton landed the UCSB women’s volleyball team its first season sweep of a conference opponent this season. The Gauchos’ offense hit over .350 in two of four sets and for the first time this season, four different players recorded double digit kills to win in sets of 25-15, 25-19, 14-15, and 25-17. 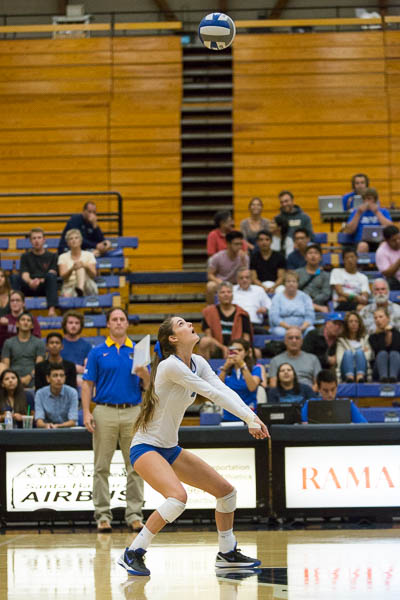 Senior opposite Jaylen Villanueva tallied a match-high 14 kills, registering a double-double with 13 digs. On the right wing of the court at the other opposite position is senior Britton Taylor, who recorded 10 kills. At the net, junior middle blockers Phoebe Grunt and Elizabeth Sheffield emerged for stellar hitting nights as Grunt earned 13 kills and Sheffield ended with 11.

The catalysts for UCSB’s success on offense were both setters, senior Hanna Nielson and freshman Annie Hasselmann. Nielson finished with a match-high 30 kills while Hasselmann had 21 on the night. The duo’s total of 51 assists contributed to the team finishing with a season-high of 59.

Despite a compelling performance the previous night, Santa Barbara could not follow up its win as it was swept by UC Riverside on Saturday. UCSB loss in straight sets by scores of 15-25, 23-25, and 21-25.

The victory over the Titans ended UCSB’s five-match losing streak heading into the weekend, but Saturday’s outcome added another loss to the Gauchos’ records of 7-18 overall and 3-11 in the Big West Conference.

Cal State Fullerton continues to plummet after Friday’s loss and being swept by Cal Poly on Saturday. The Titans sit at 0-26 overall, 0-14 in conference matches, matching their second worst start in program history.

However, it was a historic ending to the weekend for the Highlanders as they broke a program record for conference wins, earning their fifth in the sweep of UCSB. The 3-0 victory was the team’s second sweep of the season, creating another UCR record.

UCSB’s quick start to open the match against CSUF led to it maintaining the lead throughout the entirety of the first set. An early 4-0 scoring run handed the Gauchos an 8-3 lead but would be trimmed as the Titans answered back with a 4-1 run of their own to pull within two at 7-9.

Having the best season in her collegiate career, Grunt’s surge of three consecutive kills helped to extend Santa Barbara’s lead to 13-7. Her 13 kills matched a season-high in attacks to go along with a .346 hitting clip. Grunt was the only Gaucho to record a solo block.

Fullerton slowed down UCSB’s attack to a .286 hitting percentage in the second set and took an early 5-2 lead. But the Titans’ short stint of scores did not last long as they could not surpass the Gauchos’ defensive prowess.

In addition to CSUF’s six errors, Santa Barbara allowed just seven kills to hold the Titans to a .028 hitting percentage. The Gauchos’ 76 digs were their second-most in a match this season. Leading UCSB in defensive scoops was freshman libero Emilia Petrachi with a match-high 26.

Exchanges of scoring runs between the two teams resulted in Fullerton taking a 13-10 lead, ensuing a UCSB timeout.

Coming out of the timeout was a reinvigorated Santa Barbara team as it achieved a 4-0 scoring rally of its own to force a CSUF timeout. But the Gauchos’ dominance persisted, extending into an 11-1 run that put them up 21-14 and eventually led to a 25-19 set victory.

Five of Grunt’s 13 kills appeared during the set while UCSB notched four of its nine service aces as well, the total being its second-most this season.

CSUF countered with an outstanding .448 hitting percentage in the third set. Most notably, Fullerton never trailed as it had 13 kills and zero errors.

Sophomore outside hitter Katelyn Nielsen provided the spark to the Titans’ 16-5 run, tallying an individual 5-1 scoring run. She finished with a career-high 13 kills and helped lead Fullerton to its 25-14 win to cut the Gauchos’ lead to 2-1.

But Nielsen’s breakout performance was not enough to prevent UCSB from taking a 25-17 win in the final set for the 3-1 victory. UCSB’s .371 hitting percentage to end the match was its highest for the evening. Another four aces would appear as Sheffield had a match-high three.

While neither team hit over a .300 clip in any set of Saturday’s match, UC Riverside’s offense was just enough to edge UCSB, specifically in the final two sets.

Villanueva registered another double digit hitting performance with 12 kills but was outperformed by the excellent attack of UCR’s senior outside hitter Helena Peric. She recorded a match-high 18 kills for the fourth time this season to lead Riverside to its 3-0 sweep of UCSB.

Santa Barbara will face Hawai’i next Saturday, Nov. 14th in its last home match of the season. It will also be the team’s senior night in which five players will be honored.