The Daily Nexus
Sports
Gauchos’ Offense Out of Sync in Season Opening Weekend
November 15, 2015 at 11:56 pm by Sean White

Friday’s season opener and Sunday’s follow up game on the road were reminders not to expect too much in the early rebuilding stages of the UCSB women’s basketball team with new Head Coach Bonnie Henrickson. 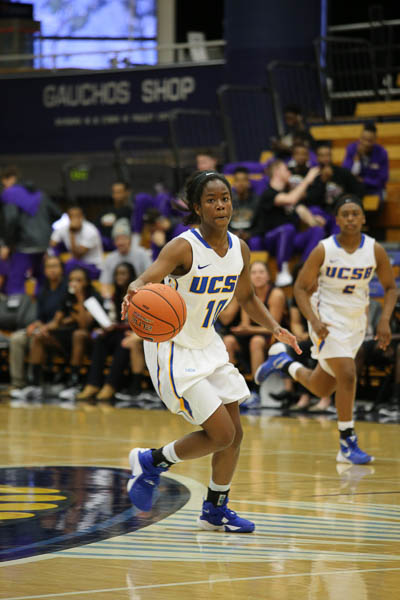 Onome Jemerigbe looks for an opening on the court. Jenny Luo/Daily Nexus

After contests against Washington State on Friday and Idaho on Sunday, the Gauchos are 0-2. Over the course of two games, UCSB has amassed 40 turnovers while shooting just 26.5 percent from the field and 15.2 percent from behind the three.

Both the Cougars and Vandals are off to 1-0 starts to open the season. Washington State defeated the Gauchos 61-44 while Idaho beat UCSB 64-42.

Issues with foul trouble and turnovers plagued UCSB in its season opener at Washington State. A total of five Gauchos had three or more fouls and the team finished with 23 turnovers.

Much credit is deserved by the Cougars’ defense as they recorded 15 steals and nine blocks to hold UCSB’s offense to a 25.6 percent shooting night and 14.3 percentage from long distance. Washington State benefitted from its stout defense by scoring 25 points off turnovers.

It didn’t take long for Washington State to adjust to the Gauchos’ offense after UCSB earned a 13-11 lead at the end of the first quarter. Santa Barbara’s first possession resulted in a made jump shot by senior guard Jasmine Ware.

The Gauchos shot 45.5 percent from the field, making 5-of-11 shot attempts in the first quarter. Miller’s one make from behind the perimeter was her only field goal in six attempts from beyond the arc.

Two quick fouls early in the second quarter sent UCSB freshman forward Kali Jones to the bench. With the core of the Gauchos’ offense on the sidelines, it prompted Washington State’s takeover.

Despite a slow start in the first quarter, freshman forward Borislava Hristova was a driving force in the Cougars’ 13-4 run to open the second quarter. Her eight points helped Washington State outscore UCSB 20-8 in the quarter to take a 31-21 lead at halftime.

Hristova finished with a game-high 15 points on six-of-nine shooting. She sank 50 percent of her three-point baskets, making two-of-four attempts and grabbed six rebounds.

Washington State continued its scoring rally with an 8-2 run to begin the second half, gaining a 39-23 lead. Aside from the one layup made by senior center Melissa Maragnes, UCSB was limited to five free throw attempts to close the quarter.

With a 43-28 lead entering the final quarter, WSU increased its lead to as many as 19 points with 3:11 left in regulation. The Gauchos came within 13 but could not trim the Cougars’ lead to any less as Ware made UCSB’s only three-point make of the fourth quarter as the game ended with WSU winning 61-44. Ware was the Gauchos’ leading scorer and rebounder with nine points and seven rebounds.

When shot attempts won’t fall, a coach can only encourage their team to keep shooting in hopes of overcoming the slump. But an extra 12 shot attempts wasn’t enough for UCSB to shake its shooting woes.

The Gauchos nearly replicated their shooting performance from the opening night as they recorded a 27.3 field goal percentage and a 15.8 three-point percentage against Idaho.

Unlike Friday’s impressive start, UCSB didn’t score until halfway through the first quarter. It started 0-of-7 from the field and didn’t record its first make until the 4:36 mark of the game. This wasn’t until after Idaho’s 8-0 run to begin the quarter.

Just when the Gauchos may have been trimming their deficit with a Miller three-pointer, three consecutive three-point field goals increased the Vandals’ lead to 17-5 to force a UCSB timeout.

Draining one of the three-point makes was sophomore forward Geraldine McCorkell. She scored half of her game-high 14 points in the first quarter. Idaho restrained UCSB from scoring for the rest of the quarter to take a 19-5 lead at its ending.

Santa Barbara’s 13 points in the second quarter was its highest for the game. Junior forward Mi’Chael Wright and sophomore guard Makala Roper scored two baskets each but their respective efforts weren’t enough to bring Idaho’s lead within single digits. The Vandals matched UCSB’s 13 points to take a 32-18 lead at the half.

However, UCSB did turn the ball over 17 times. While the Vandals had 12 turnovers, they outscored UCSB 21-8 in points off turnovers.

Down 22 points, UCSB didn’t score its first field goal until the 5:21 mark of the fourth quarter. Helping Idaho close the game was senior guard Christina Salvatore and senior forward Ali Forde. Both registered 10 points to help the Vandals secure their 64-42 victory.

Next for UCSB is its home opener this Thursday, Nov. 19th versus Cal State Bakersfield.