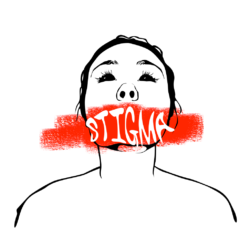 I recently was perusing the Daily Nexus when the article “Mental Health on Campus: Addressing Silence and Stigmatization,” caught my attention. As someone who spends a lot of time reading literature about mental health, I was initially delighted that an article was being published through a news source that would have the potential to reach a lot of my peers and educate them about the dangers of stigma. What I actually stumbled upon, however, was a reminder of how ignorance and misinformation will always be the greatest enemy to the destigmatization of mental health. Though I severely doubt it was the author’s intention, this article further perpetuates the stigma surrounding mental illness, and I felt the need to create this response to clear up some misinformation and shed some clarity on some of the points made.

Let me start by defining “stigma.” At any given time, it is estimated that one in four adults is struggling with a diagnosable mental illness, but it’s one of the least discussed topics in society today. The dictionary defines stigma as “a mark of disgrace associated with a particular circumstance, quality, or person.” Stigma, in other words, is shame. And when we are ashamed of something, we are silent about it. I believe this Nexus article operates on the misconception that the issue with stigma is that society views mental illness in a negative light. What it fails to understand is that the deeper issue with stigma is that it shames people into remaining silent about their mental health. Often, this shame silences people to the point where those suffering would rather end their lives than seek the help they deserve.

…the deeper issue with stigma is that it shames people into remaining silent about their mental health.

The article equates Counseling and Psychological Services’s (C.A.P.S.) #SaySomething campaign to the U.S. Department of Homeland Security’s warning about terrorism. While perhaps similar at some level, this faulty analogy compares showing concern for another person’s mental well-being to reporting them as a terrorist. This comparison is a quite a stretch, and, unfortunately, perpetuates the stigma that people who struggle with mental illness are violent. (In fact, data shows that people who struggle with mental illness are actually more likely to be the victims of violent crimes.)

I feel this improper comparison comes from a fundamental misunderstanding of the purpose and function of the #SaySomething campaign. The author would have us believe that the #SaySomething campaign is meant to encourage students to pry into every intimate detail of each other’s lives, when, in actuality, the campaign is a reminder that when we interact with people, if we notice something may be off, it’s okay to reach out to them. If I notice my friend is feeling down and I ask her if she’s doing okay, she may say that she’s fine, she may exercise her freedom to say nothing at all to me or it may be the stepping stone for a larger conversation about mental health — perhaps one that could significantly improve the quality of her life. The article suggests that when I #SaySomething to someone I am concerned about, that I am hurling society into a dystopian future where Big Brother is watching, but what I actually see is a step toward a society where people can feel open to having important conversations about mental health with their neighbors, friends and loved ones.

The author also expressed his belief that mental health first aid “is not comparable to traditional first aid. In a typical first aid situation, the problem is obvious — neither the person being treated nor the person performing the first aid is in doubt — and both typically agree to the treatment.” Having personally attended and completed an eight-hour Mental Health First Aid training course, I could not disagree more with this statement. The purpose of traditional first aid is to provide care to someone in need until the appropriate professionals have arrived and can take over care. The same concept applies to mental health first aid, where in addition to basic knowledge about many types of mental health disorders, they cover how to help people during a mental health emergency, whether that be a panic attack, an episode of psychosis or a suicide attempt. All of these emergency scenarios have fairly obvious symptoms, can be recognized by someone with the right training and, in most cases, both parties would consent to the treatment until an appropriate professional arrived.

Additionally, the article presents a false sense of danger and fear surrounding the 5150 procedure. Simply having suicidal thoughts alone would not be enough for someone to be placed in psychiatric hold; the person would have to prove themselves to be a clear and immediate danger to themselves or other people. UCPD is also well trained to handle mental health emergencies, and the immediate response to an emergency would not be to 5150 someone. Someone reaching out for help would also be highly unlikely to have to go through this procedure. Generally, the fact that someone would be reaching out to C.A.P.S. or another means of help is a positive sign that they are trying to make an improvement in their mental health. Additionally, the police are not the only resource available to someone at risk of a mental health emergency. In fact, UCSB has a Student Mental Health Coordination Services office that serves as point of contact to help students in distress, consult with them and help refer them to the resources they need.

The author asks “How can organizations like C.A.P.S. talk about ‘ending the stigma’ surrounding mental health when this sort of treatment is a potential consequence of a student coming forward?” To that I would reply that C.A.P.S. needs to talk about “ending the stigma,” because stigma contributes to the misinformation and fear surrounding such procedures, and contributes to the 1,100 student deaths by suicide each year. If we’re ever unsure about the importance of saying something, we can look at the story of Kevin Hines. Two years after he was diagnosed with bipolar disorder, Kevin attempted to take his own life by jumping from the Golden Gate Bridge. He is one of only 34 people to survive the fall, and in an interview with TIME magazine, he shared that on that day “I said to myself, if just one person, just one, comes up to me and asks me if I need help, I’ll tell [them] everything.”

Stigma is why I told everyone my antidepressants were working, even when it couldn’t have been farther from the truth.

The author of the Nexus article does encourage people struggling with mental illness to speak up and personally say something about their own mental health. However Hines’s story and countless others like his remind us why we need many voices in the battle against stigma. The article suggests that it is easy for a struggling student to get help on their own. It fails to acknowledge what a tremendous task it can be for those struggling with mental illness to get the help they need. Like I said before, stigma is shame, and trying to seek help for an illness that already makes day-to-day living difficult — while under the scrutiny of a society that has such a large stigma around mental illness — can seem nearly impossible. I know from experience.

Stigma is why I spent three years hiding scars before I got help for the first time. Stigma is why I told everyone my antidepressants were working, even when it couldn’t have been farther from the truth. Stigma is why I’ve walked up the front steps of the pink building on more than one occasion only to turn around before I could make it to the door. Some days, my depression is so bad, it doesn’t let me get out of my bed, and on those days, I don’t feel particularly inspired to walk through the doors to C.A.P.S. and make an appointment on my own. My experience with dealing with a mental illness, and the experience of many other people I have spoken with couldn’t be farther from “the guy in Albertsons who asks if you’re finding everything okay.” The days I need help the most, stigma shames me to the point that I can’t ask for it. It’s on days like that in which I am thankful for when a friend decides to #SaySomething to me.
Joren Adams hopes students at UCSB will consider the benefits of speaking up about mental health.