The Daily Nexus
Sports Blogs
Kobe Bryant: The Lakeshow Sensei
November 12, 2015 at 5:08 am by Elliot Thornton

NBA players everywhere anticipate the month of October as it is time for their fresh bodies to embark on another season. While young stars like James Harden and Steph Curry continue to impress in the early stages of the season, it hasn’t been the smoothest start for 37-year-old Laker Kobe Bryant.

After dealing with a ruptured rotator cuff, which he suffered last January, and a series of injuries that have kept him in and out of play for the past three seasons, the Black Mamba has not been the ideal phenom fans are used to seeing.

Averaging a dismal 16.5 points per game, his lowest stat line since 1997, it’s safe to say the five-time champion has not resembled his dynasty days of playing alongside long-time partner Shaquille O’Neal.

Bryant’s performance this year has been far from stellar, but the veteran has taken a different approach this season: embracing a mentorship role for a young, talented team. 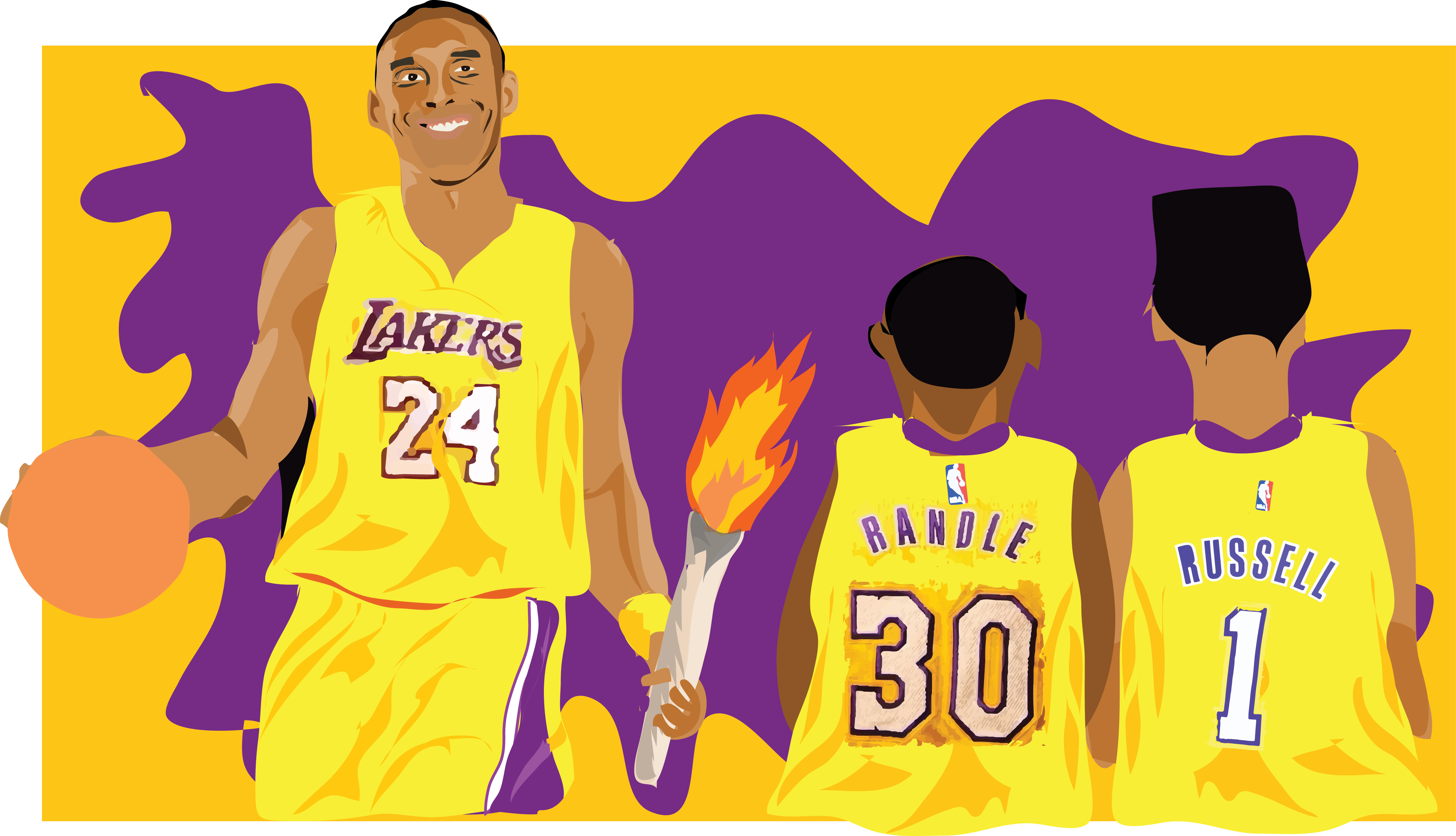 Julius Randle and D’Angelo Russell, two prominent prospects heading out of their respective colleges, Kentucky and Ohio State, have had high expectations since being drafted by the Lakers franchise. These first-round selections have attracted a plethora of attention in the NBA spectrum.

Starting his first healthy season following an opening day leg injury last year, forward Julius Randle has come back into the league with a vengeance. As a starter, the power forward leads the team in rebounds with an average of 8.3 per game and ranks fourth on the team in scoring, averaging 11.9 points per game. The former-Kentucky star proved doubters wrong on Sunday, carrying the Lakers with a 22 point, four assist and 15 rebound outing against the Dallas Mavericks.

Garnering a 6-foot-9, 250-pound frame and just 20 years of age, the second year’s big body makes him a great candidate as a big for the Lakers. Following a 111-112 opening night loss to the Minnesota Timberwolves, Bryant admired the youngster’s battle against the veterans in the league, like 20-year-old forward Kevin Garnett.

“I know KG and KG loves testing young guys,” Bryant said in an interview with ESPN. “He loves to do that just to see what they’re made of … [Randle] responded like a grown man. I think KG has a lot of respect for him because of it.”

Randle has not looked back since the rehabbing of his leg injury. The second-year forward is a central target in the L.A. offense, scoring double digits in four of his last seven games. While his accolades stand high, Randle is not the only young player making noise this season.

As his transition to this guard-oriented league has been challenging, first-year point guard D’Angelo Russell is slowly but surely finding his niche in the NBA.

The only rookie to rank among the top five in points, assists and steals from the 2015 NBA Draft class, Russell has definitely made his minutes count under the system of second-year Head Coach Byron Scott.

Adding to the wing rotation of Jordan Clarkson, sixth man Lou Williams and Brazilian distributor Marcelo Huertas, Bryant has reduced his role and allowed these young players, specifically Russell, to adapt to the league.

“I’m really wanting to let the young guys, especially D’Angelo, call the game,” Bryant said to ESPN. “Let him organize the game. Let him read the game … Let him make those decisions.”

Bryant’s faith in Russell lies in his ability to fit the combo-guard package. Reeling in at 6-foot-5 and close to a 6-foot-10 wingspan, the former Buckeye has the floor vision and scoring ability necessary to be an elite point guard in the NBA.

Similar to the flexible play of fellow lefty Manu Ginobili, the 19-year-old point can act as both a facilitator and scorer depending on the given situation. Russell led Ohio State to a 24-11 season last year, averaging a conference-best 20.3 points per game and dropping 32 big ones in the Buckeyes’ March Madness debut against VCU.

We have seen spurts of Russell’s efficiency this year, helping his team earn their first win of the season on Friday off a 16-point performance against the Brooklyn Nets.

There is no question about the potential of this young athlete, however, it is consistency that the former Big Ten Freshman of the Year must learn to foster. This is a skill that Russell will develop over time.

The pieces are there and flourishing for this infant Los Angeles Lakers team. As the legendary “Kobe era” comes to a close, new players like Julius Randle and D’Angelo Russell begin a new chapter, having the opportunity to step in and make a name for themselves.

Complemented by the talent of second-year wing guard Jordan Clarkson, who already earned his stripes last season by averaging close to 20 points per game without Bryant, the future seems relatively bright for the Lakers.

While the former 18-year-old from Lower Merion High school never expected this day to come, Bryant could not be in a better position to have young talent like Randle, Russell and Clarkson follow in his footsteps.

With five NBA championships, a resume of more than 200 playoff game appearances and the Lakers’ all-time leading scorer title under his belt, Bryant understands that this season is no longer his time to shine. Instead, it is his moment to share his veteran experience with this young crew and prepare them for the NBA.

Now in his 20th season with Los Angeles and with no intentions to join any other organization, the Black Mamba is finally taking a backseat and passing the torch to a new generation of Lakers.