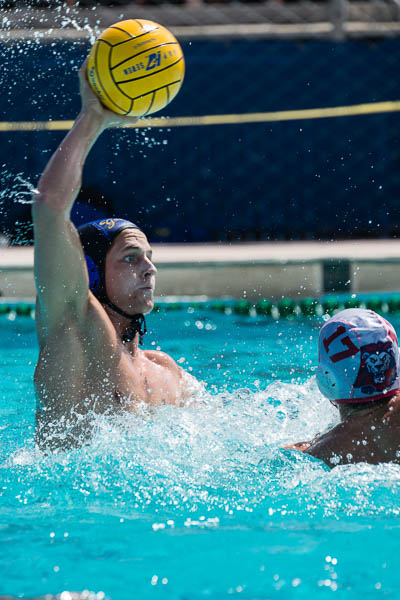 Coming into the penultimate weekend of the regular season, the No. 6 UCSB Men’s water polo had two tough matches including one against No. 1 UCLA. Unfortunately the Gauchos lost to the Bruins 9-4, but were able to rebound and pick up a solid non-conference road win at No. 16 UC San Diego 16-14.

The equivalent win/loss record puts Santa Barbara at an admirable 15-9 record but the loss at UCLA drops it to 3-5 in MPSF play. After defeating UCSB, the Bruins also beat LBSU to help preserve their perfect 24-0 record including an 8-0 conference record. With the win UCLA has now locked up the No. 1 seed in the MPSF championships. The loss for the Tritons sets them back to an 11-13 record but still hold a respectable 4-2 WWPA record.

One thing the Gauchos are respected for is their resiliency. In fact, the Gauchos haven’t lost back to back games in five weeks. They were able to keep this streak alive by pulling out a tough overtime win against UCSD after losing the night before at UCLA.

UCSB came out of the gates firing, opening up a 3-1 lead midway through the first period thanks to senior two-meter Liam Gaughan and junior utility Reed Cotterill. However, right before the quarter came to a close, senior utility Chase Cockerill netted a goal to make the score 3-2.

The high scoring continued in the second as the frame began with both teams trading goals before Santa Barbara went on a run and took a commanding 7-4 lead. But once again UCSD closed the quarter strong adding two goals in the final minute to only trail by one at halftime, 7-6.

The third period commenced with the Tritons scoring two goals to take their first lead of the game 8-7. The Gauchos responded by going on a 3-0 run with goals from junior attacker Mitchell Hamilton, Gaughan, and senior attacker Derek Shoemaker. The Tritons’ own captain, Cockerill, added two goals to end that run and go into the final frame tied at 10. Both teams traded two goals in the fourth to make it 12-12 headed into the overtime period.

The OT began with Hamilton and Shoemaker scoring goals to open up a 14-12 lead but just before the first intermission the Tritons scored with 15 seconds left to cut the lead to one. However the Gauchos proved to be too much as they added two more goals in the second half of overtime and won 16-14.

Shoemaker had yet another impressive game scoring four goals on the night alongside fellow senior Liam who netted his own three. Senior goalkeeper Chris Whitelegge also had another outstanding performance with 10 saves on the night.

One night prior to this impressive offensive output which is now UCSB’s season high for points in a single match, Santa Barbara was held to its lowest scoring total of the season at UCLA by only being able to muster up four goals.

UCSB managed to start the game strong with good defense and went down 2-1 at the end of the first frame. However, in the second the Gauchos fell apart on both sides of the pool being outscored by UCLA 5-0 to start the quarter. Luckily Shoemaker netted a goal with just over a minute left to go down at half 7-2.

Although Santa Barbara was able to play good defense in the second half by again only allowing two goals, the offense was not able to get much of anything and was only able to equal the output of the Bruins. The game ended 9-4, with UCLA being not really threatened for most of the second half. Whitelegge did manage to finish with 11 saves however, another impressive total for the senior.

All in all this was another solid weekend for the Gauchos. They were able to show toughness by getting a tough win in a tough road game. And although the scoreboard might indicate a blowout, the fact remains that the Gauchos are still a tough contender in MPSF play.

UCSB’s final match of the regular season is Sunday, November 15th at Pepperdine at 12 p.m.