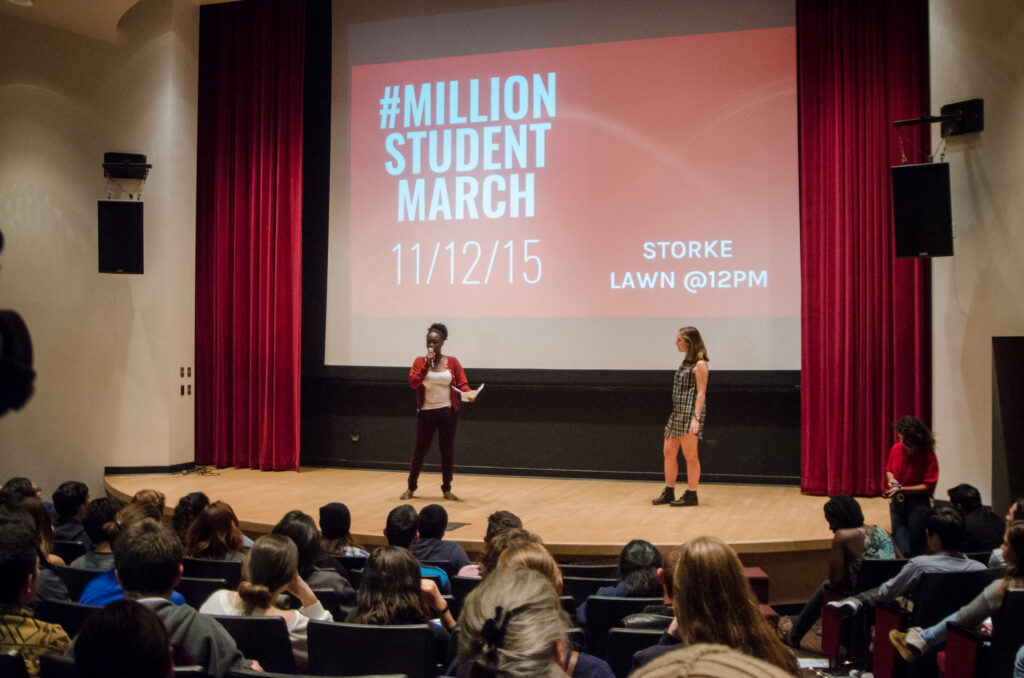 AAAC collaborated with several other student organizations such as the Student Union, Office of the Student Advocate, Associated Students External Vice President of Student Affairs Office, UCSB-4-Bernie, A.S. Office of the President and UCSB University of California Student Association to inform attendees about issues surrounding the student march which will be held on Nov. 12 at 12:00 p.m. at Storke Plaza. UCSB will join over 90 other colleges, including all nine UC’s (excluding UC San Francisco), in marching to demand free public university tuition, the cancellation of all student debt and the installation of a $15 minimum wage for all campus workers.

A.S. External Vice President of Statewide Affairs (EVPSA) and fourth-year sociology and Black studies double-major Mohsin Mirza said the Donahoe Higher Education Act, alternatively referred to as the Master Plan for Higher Education in California, made tuition free for UC schools when the UC system was first founded in the 60s. According to Mirza, the act was in place up until Ronald Reagan imposed a “student fee” to attend the universities and diverted UC funding to other, less productive activities.

“[Reagan] saw the UCs as promoting — basically handing out free education to a whole bunch of would-be communists,” Mirza said. “He saw the UC’s principles to educate people as dangerous, and this tied into his ideas, which were generally against public spending.”

I.G.N.I.T.E. Coordinator for the EVPSA office and fourth-year biology major Clare Idehen said Reagan diverted UC funding to prison spending and mass incarceration, which “disproportionally” affects Blacks and Latinos more than other ethnicities in America with one in three black men going to prison in their lifetime.

“Since the 80s, we’ve seen a huge 800 percent increase in the amount of people going to prison, and almost half of all the people incarcerated in prisons right now are for non-violent drug charges,” Idehen said. “Why are our prisons full of people who are non-violent?”

According to Idehen, there are better ways to use the 80 billion dollars spent per year on mass incarceration in America.

“With 80 billion dollars, we could provide preschool for every three-and-four-year-old in America, finance roads, bridges and airport jobs,” Idehen said. “And most importantly, allocate tuition at every public university and college.”

Idehen said students around the globe are fighting for accessible education for all.

“They’re fighting for the same thing we are,” Idehen said. “They’re not very different from us — they’re maybe 17 and 18, 19, maybe 16 years old going to college. They’re basically us. So it’s really great to stand in solidarity with these students, and I think it’s really important to know what’s happening.”

UCSB United States Student Association Board of Directors Co-Chair and second-year political science major José Javier Magaña Mendoza said independent Vermont senator and democratic presidential candidate Bernie Sanders advocates for government subsidized college tuition through a Robin Hood Tax. According to Mendoza, it is an estate tax on stock and bond sales and a sales tax on commodities, debentures, derivatives and notes which will bring in an estimated 300 to 350 billion dollar in tax revenue.

“How the tax works is that it’s just a small financial transaction tax on Wall Street, a tax that is 0.5 percent on stocks, 0.1 percent on bonds and 0.00 percent on derivatives,” Mendoza said. “This helps us because it will go to things such as jobs, housing, affordability, child care, healthcare, transportation and a big investment on the infrastructure. As students, it also goes to our higher education.”

“All nine UC’s, except UCSF, are holding marches, and AFSCME 3299 covers all those different areas, so they’re going to be having a voice in this, but mainly stand in solidarity,” Butts said.

According to Butts, there has been a push for Chancellor Yang and the Vice Chancellors to attend the Million Student March.

“All the A.S. Executives, the GSA president and the RHA president all signed letters requesting Chancellor Yang and all of the Vice Chancellors’ presence at this march,” Butts said. “We believe that this isn’t just a student issue or a worker’s issue, but this also has to do with UC as a whole.”

Teach In speaker and third-year sociology major Alex Villegas said access to education is a global issue, and protests have been happening in London and Africa, with Africa’s protest breaking out into violence.

“I don’t think a lot of people are really aware that our generation is facing this on a global level, and that we’re going to be impacted,” Villegas said. “It’s not just a temporary situation, but it’s something life-long.  It’s going to impact the future generations, and at the end of the day we’re going to end up inheriting all of this. Our leaders are setting us up for failure, so if we don’t take action now, we’re essentially all screwed.”

Second-year sociology major Casey Ramirez said he attended because he is struggling to afford tuition.

“Debt is hard, and paying for things are a hardship,” Ramirez said. “It’s causing issues with my parents — we’re middle class and they have bad credit, so it’s hard to get loans.”

Mirza said it will take a change in policy to ease the “deep debt” students in America are accumulating.

“The money exists. We have enough money, we’re the richest country in the world to pay for free higher education,” Mirza said. “We all know all too well the impact the cost college can have on our families. The question is how can we make it so that this isn’t the case, so we can have the principle of free higher education.”

Student debt and lending is a huge problem.. if it was harder to get student loans, the demand would decrease and the tuition would need to be competitive to attract students. Its a private business, so as long as students have fat pockets of cash, the tuition will rise.