The Daily Nexus
Swim and Dive
UCSB Swim with Momentum on Women’s Team, Men’s Squad Still Searching for First Victory
November 5, 2015 at 1:00 am by Daniel Moebus-Bowles

The women’s swim team is off to a hot start after picking up another win in the Blue-Green rivalry, holding a record of 2-1. The men are still looking for their first win of the season at 0-2.

“With all the freshman that we have on the men’s side, we just need to get our feet under us,” Head Coach Gregg Wilson said. “I know they will bounce back and find a way to swim fast this week.” 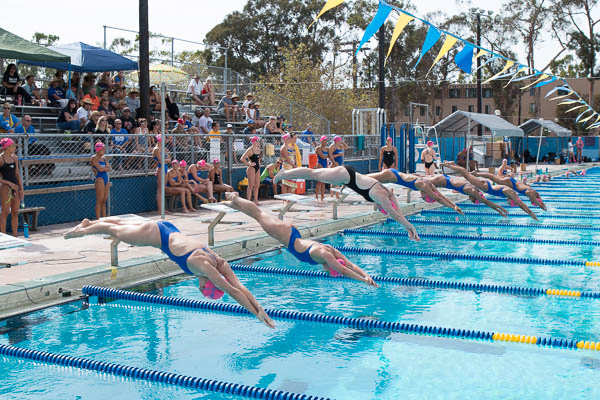 Although the men have been unable to put a digit in the win column up to this point, the freshmen have seemed to find their way in their first couple collegiate meets.

Freshman Erik Vanbrocklin has been a bright spot for the young Gaucho team as he tallied a win in last week’s match with Cal Poly. Vanbrocklin took the 200-yard freestyle for his first collegiate victory at a time of 1:40.78. His teammate, freshman Joe Kmak, grabbed his first win in the 200-yard breaststroke after taking fourth in the event in his first meet with USC. He came in at a time of 2:03.06, nearly three seconds faster than his first meet.

“Our women have been very impressive up to this point,” Wilson said. “[Senior Katie Records] took home the Conference Athlete of the Week award, and really we could’ve had some others take home that same award after their last meet.”

The others that Coach Wilson speaks of are junior Cheyenne Low, senior Lauren Vosseler, and sophomore Alyssa Shew, who have really led the Gauchos to their success at this early point in the season. All four Gauchos have added countless individual and relay wins already for Santa Barbara this season and are continuing to dominate each of their unique event categories.

Low, a transfer student, has already fit into this Gaucho team as she has contributed to back-to-back victories in the 200-yard medley relay, as well as three individual wins and a few second place finishes.

“Our team looks really strong at this point and it’s still early in this season,” Low said. “You can feel that we all are willing to work really hard to get the job done every meet.”

This weekend, Santa Barbara will host the Tritons of UC San Diego, an opponent not to be taken lightly. Both San Diego’s men’s and women’s teams started off the season with blowout victories over Claremont-Mudd-Scripps, and are undefeated to this point. The men won 203-95 and the women had an even more impressive win at 242-49.