The Daily Nexus
Science & Tech
Study Shines Light on Photosensation
November 5, 2015 at 6:00 am by Mimi Liu 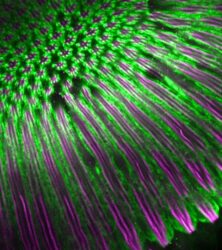 Researchers stained the Drosophila melanogaster eye with antibodies that recognize the components of interest, TRP (purple) and anti-XPORT (green).

Light perception begins with activation of a light sensitive protein, called rhodopsin. One class of photoreceptor cell in humans couples activation of rhodopsin to opening of “transient receptor potential” (TRP) channels, which lets sodium and calcium into the cells and activates the neurons. Researchers at the Craig Montell Lab have new insights about the mechanisms through which these proteins are transported to the cell surface. The results increase current understanding of protein trafficking and protein folding, which is relevant to understanding neurodegenerative and retinal degenerative diseases in humans.

Postdoctoral researcher and lead author Zijing Chen published the findings in the journal Cell Reports on Oct. 20. Chen’s paper illuminated the detailed processes of protein transport in the eyes of Drosophila melanogaster, the fruit fly. He focused on rhodopsin and transient receptor potential channels (TRP), which play an important role in the conversion of light into electrical signals by photoreceptors in the eye, a process termed phototransduction. The brain can then process these electrical signals and perceive an image.

“TRP channels are a large family of ion channels, from fruit flies to humans,” Chen said. “They play an important role in temperature sensing and are involved in phototransduction.”

He added that TRP channels and their subfamilies are also involved in taste and mechanosensation. Chen’s research focuses on their role in photosensation.

“TRP mutations have been linked to neurodegenerative disorders,” Craig Montell, a professor in UCSB’s Department of Molecular, Cellular and Developmental Biology, said. “These are due to protein misfolding, and in some cases because proteins are not being trafficked to where they need to be. Therefore, understanding protein trafficking is important.”

The Montell Lab’s fruit fly research is on a microscopic, molecular level. To put into perspective the scale of this research, fruit fly eyes are compound and made up of 800 individual tiny hexagonal structures called ommatidia. Each ommatidium contains eight photoreceptors, a cornea and other cell types, and each photoreceptor is composed of a cell body and a rhabdomere. Chen described rhabdomeres as composed of “thousands of small, tube-like structures” stacked on top of each other. At the surface of a rhabdomere are about 100 million rhodopsin molecules that absorb light.

Chen focused on the exact mechanism by which rhodopsin and TRP migrate to the rhabdomere and how fruit fly genes control this process. He explored the underlying mechanisms of previously identified genes, XPORT A and XPORT B. Through experimentation, Chen concluded that if both XPORT genes were missing, depolarization seemed to be absent; the light was present, but the fruit flies were incapable of perceiving it.

“We used small glass electrodes on fruit fly eyes. We shone light on their eyes and measured the difference in depolarization for different genotypes for the same period of light exposure,” Chen said.

XPORT A and XPORT B code for two different chaperone proteins, which assist in protein folding and are involved in protein trafficking, so loss of either gene results in a decrease in light perception.

“When a protein is made, sometimes they need a lot of help getting to where they need to be. Chaperones are an important player in this process,” Montell said.

Chaperones also assist in protein folding; if a protein is incorrectly folded, it will most likely malfunction. Understanding the protein trafficking process of TRP and rhodopsin is an important step towards treating neurodegenerative problems resulting from defective protein folding or trafficking.

“We now know how TRP and rhodopsin are affected and trafficked by [XPORT A and B]. We now need to identify the full set of chaperones needed for rhodopsin and TRP,” Chen said.

A version of this story appeared on p. 14 of the Thursday, Nov. 5 print edition of the Daily Nexus.

Seriously kinda fell asleep reading this article. I guess you just have to be into this stuff. The research sounds interesting though.