The Daily Nexus
Sports
Men’s Basketball Set for First Tip Off in Post Big-Al Era
November 5, 2015 at 5:10 am by Michael Jorgenson 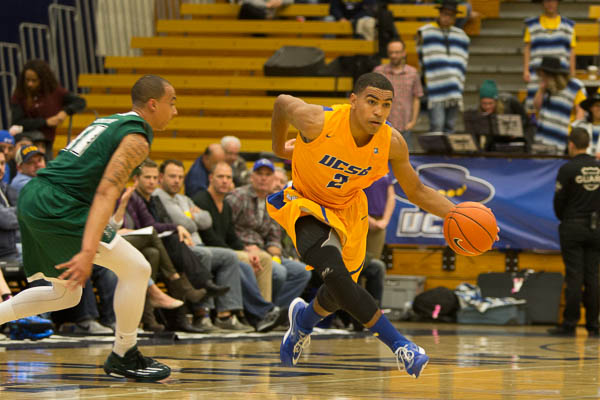 A new era of UCSB men’s basketball begins this Sunday when the Gauchos take on San Francisco State in their single preseason exhibition.

In 2014, Santa Barbara’s season ended with a pair of tough losses to UC Irvine in the Big West Tournament and Oral Roberts in the College Basketball Invitational, putting it at 19-14 overall. For the first time since 2012, UCSB will be starting the season without center Alan Williams and point guard Zalmico Harmon, who both graduated last year.

In his two years with UCSB, Harmon was one of the conference’s most efficient point guards, leading the Big West with a 4.6 assist to turnover ratio in 2013-14 and ranking fourth in 2014-15 with a 2.2 ratio.

After a short stint with the Houston Rockets in the NBA Summer League, Williams made the move to the Chinese Basketball Association to play for the Qingdao Double Star Eagles. He leaves behind huge shoes to fill after finishing as UCSB’s all-time leader in rebounds and second all-time leader in scoring.

Even though they have to replace two key starters, the Gauchos received 161 points in the Big West Preseason Coaches’ Poll, predicting a second place finish behind only UC Irvine. After a 72-63 overtime win in the Big West Semifinals, the Anteaters went on to win the conference and earn a berth in the NCAA Tournament.

Despite the lineup changes, UCSB will not be without strong leadership this season. Senior guard Michael Bryson was named to the Big West All-First Team after averaging 13.9 points per game in 2014-15, good for ninth best in the conference. His career point total of 1,043 is the most among active Big West players, helping make him the only Gaucho voted to the Big West Preseason All-Conference team.

Alongside Bryson, senior guard John Green has overcome a series of injuries throughout his collegiate career to establish himself as one of the best players on the team. After missing all but four games from 2011-2014, Green played all 33 games in 2015 while averaging the third most points per game on the team at 11.3 on an impressive 47.7 percent shooting from the field.

Last year’s Big West Freshman of the Year Gabe Vincent will have an increased role in the backcourt with the absence of Harmon. In just his first year with the Gauchos, Vincent averaged 10.1 points and 2.1 assists per game while knocking down 57 three pointers, the second most by a freshman in program history.

UCSB added a handful of freshmen in the offseason, including point guard Grant Troutt from Episcopal School of Dallas and forward Jarriese Blackmon.

Troutt averaged 12 points, five assists and two rebounds in his junior year and impressed scouts with his play in the AAU circuit to earn a spot with UCSB. He will join a crowded backcourt that already has several other point guards including junior Eric Childress and senior T.J. Taylor. Similar to last year, Head Coach Bob Williams may plan to use different combinations which utilize three or four point guards throughout the season.

Meanwhile, Blackmon was Utah’s Player of the Year, leading his team to the state championship tournament with averages of 16.7 points, 10.7 rebounds and over two assists, blocks and steals per game. At 6’6”, 210 pounds, he is a combo forward that can make an impact early for UCSB.

Finally, forward Ami Lakoju will have his chance to shine after missing the majority of last season. The redshirt freshman collapsed during practice last December and was shut down for the remainder of the year, but has made progress since then and should play a huge part for the Gauchos as they look to replace Williams, their top player from the last few seasons.

UCSB’s season-opening exhibition against San Francisco State tips off this Sunday at 5:30 p.m. in the Thunderdome.

A version of this article appeared on page 9 of November 5, 2015’s print edition of the Daily Nexus.