The Daily Nexus
Opinion
Ineffective at Best, Frightening at Worst: Inside Gaucho FYI
November 5, 2015 at 9:39 am by Nicholas Bogel-Burroughs 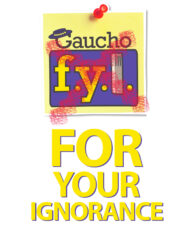 The two-hour program — required for freshmen and transfer students—does not sufficiently explain the heinousness of sexual assault, the unbearable consequences survivors face, and the androcentric culture that has led to a country where nearly 20 percent of women have been raped.

But the workshop, which was more like a lecture, focused largely on bystanders and how they could stop a sexual assault from happening. And while the two staff members, one man and one woman, did give some useful advice on how to intervene in dangerous situations at parties, they did not address the problem at its source, failing to tell potential rapists not to rape.

“A lot of these situations are very murky,” I was told, referring to the concept of consent.

During one exercise, 10 students were asked to hold giant, yellow signs with words like “pre-game,” “kissing” and “intervene.” A staff member asked the audience what occurs if the large “sex” card happens without the “consent” card.

“Rape,” I answered. What’s murky about this?

When I answered a question about why an intoxicated person cannot give consent, one of the staff members told me I must have “really studied” for the workshop. Are two explanations over two hours truly more than the workshop expected from its students? Identifying rape as sex without consent and explaining that drunk consent does not exist should be the bare minimum for college freshmen.

At times, the staff members seemed to be on the edge of taking the workshop seriously, but would then veer back off course. When one staff member was assigned to act in the role of a “predator” at a party, he decided he preferred “creeper,” smiling at the new moniker and describing it as less harsh. Do we truly need less harsh terms for men who terrorize women?

Later in the session, when the male staff member was emphasizing the importance of intervening in risky encounters, he recalled his own regret at kissing a woman after he discovered she was “ugly” the next morning. This, the staff member told students, is why it’s important to intervene if they see a drunk friend making out with a stranger.

Objectification performed right before the students’ eyes — if only the instructor knew!

The hazing section was another futile lesson. “If you respect yourself, don’t let yourself get hazed unless you have to,” students were told.

At the time of my workshop, one of my friends had already begun pledging and had encountered hazing. Instead of recognizing her as a victim, my Gaucho FYI instructor essentially told her she did not have enough self-respect. Surviving a sexual assault, which can be part of hazing, is already stigmatized and victims can feel as if society expects them to simply move on. Students are already more than twice as likely as non-students to describe their sexual assault as “not important enough” to report; student victims do not also need to feel as if they were assaulted because they lack self-respect.

Another cringe-worthy moment came when the male staff member was speaking on the importance of consent.

“If something’s up,” he said, referring to a scenario where a partner is not actively giving consent, “just cuddle for the night.”

First, let’s focus on the fact that a lack of consent was referred to as a moment when “something’s up,” implying that anything but consent is abnormal and problematic. Second, his imperative that students cuddle if one party refuses sex is misses the point that all forms of intimacy, including cuddling, require affirmative consent.

The most revolting moment of the workshop was at the end of the session, when students were shown a video meant to explain consent in simple terms. The video is a popular one; it has racked up more than a million views on YouTube.

The short clip compares asking for consent to asking if someone wants a cup of tea. While the video may have good intentions — it was commissioned by a police department in London — it was clear from the students’ reactions that the video’s most prominent effect was to trivialize rape and consent.

At the end of the video, the narrator says, “If someone said yes to tea [sex], started drinking it and then passed out before they’d finished it, don’t keep on pouring it down their throat.” This line was met with roars of laughter from both men and women in the room. It was a suffocating laughter. It was an approving laughter that made my visceral reaction — in response to watching one stick figure pour tea down an unconscious stick figure’s throat in a depiction of rape — feel out of place. Disgust, anger and repulsion should be present in every college student while watching any depiction of rape, whether or not sex is replaced with an innocuous cup of tea. If that reaction is not present when students arrive on campus, workshops need to instill, not encourage, those responses.

“I know that was a little lighthearted,” said one of the instructors after the tea video. Maybe the staff of two was jolted by the laughter of the crowd. Maybe they realized this reaction was out of place — even scary. Maybe they realized Gaucho FYI was failing those it served to protect.

But even giving them this benefit of the doubt, it was too late. A group of 100 freshmen and transfer students were laughing at rape in a class that should be teaching them not to rape.

Nicholas Bogel-Burroughs is a first-year English major and an Assistant News Editor at the Daily Nexus.

We must end the scourge of cuddle-rape on college campuses!

How do you teach boys not to rape? Be specific.

the 20% stat that it touted is women who have felt harassed or abused or raped not just raped. 20% of women have not been raped. Pay attention to the stats and facts they really do matter. That 20% could be unwanted attention or being kissed while unwanted. THis does not say the stat is a good one , far from it it is horrible but dont lie about it and make it worse than the reality is

Please refer to page 18 (page 28 of the PDF) of the following report from the Center for Disease Control:
http://www.cdc.gov/violenceprevention/pdf/nisvs_report2010-a.pdf

Actually, it’s not from the CDC. It’s from the nisvs. An organization THAT COULD NOT EVEN RECEIVE MORE FUNDING unless they made up this crap. This is literally like the failed pentagon “study” that said that there were weapons of mass destruction in Iraq.

His facts are correct. The CDC conducted a survey saying that 19.3% of women in the U.S. have been raped in their lifetime. You should check your facts before you ridicule a brilliant young man doing his job. Excellent article.

“Teaching boys not to rape” is a ridiculous trope, especially in light of new data that indicates almost all sexual assaults are committed by ‘serial rapists;’ it implies that any person, specifically any man, could find himself in a situation where he cannot control his primal urges – which are, of course, to unapologetically rape. Does anyone really believe this is the case?

Gonna give any evidence as to why? Gonna write a superior article?

Somehow, I doubt it.

Ridiculous that it has come down to requiring freshman to take a course like this. What about common sense? Man – I’m glad I went to SB in the 90’s.

This is really well written, and definitely represents the problems universities are facing. I disagree with the tea… I watched this video last year and I do not think it trivializes rape. It is merely an analogy to sex. I think that it helps to make things a little clearer, especially for those who don’t know much about consent, etc. I hope that your college makes progress with reducing the amount of sexual assault on both your college campus and the world.