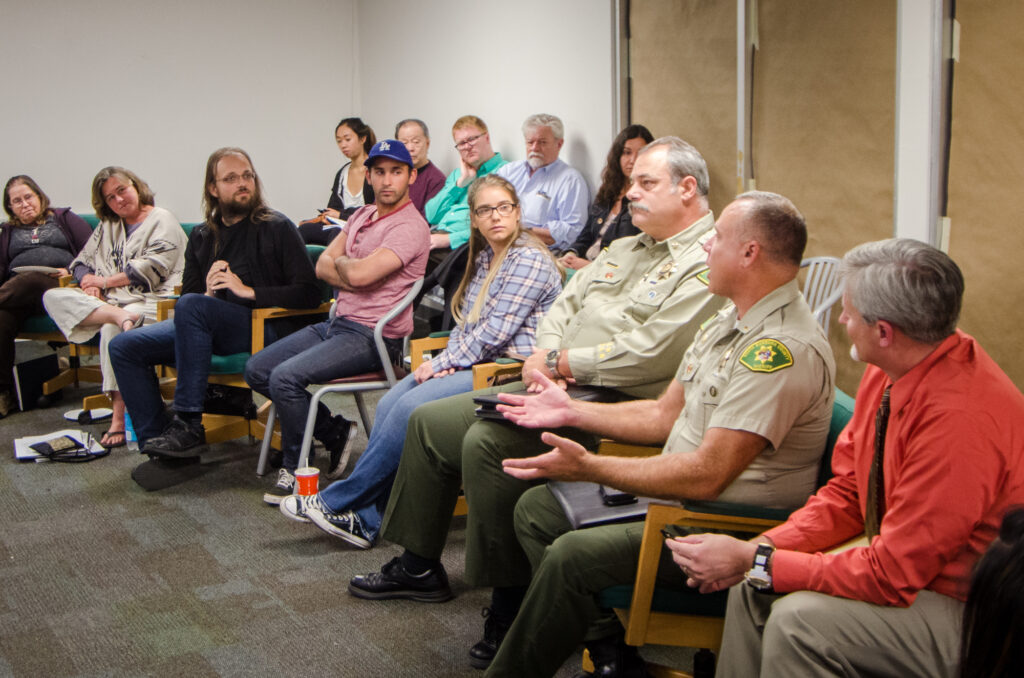 As this past Halloween weekend was a quiet one in I.V. compared to past years, local law enforcement may scale back in the future during Halloween and Deltopia. Vivian Bui/Daily Nexus

The Isla Vista Self Governance Initiative held a public meeting Tuesday evening at the I.V. Clinic Building to discuss what public safety services an I.V. Community Service District (CSD) could provide if created in the November 2016 county election.

Discussion focused on Halloween and options for local law enforcement under a CSD. Tuesday’s meeting was the third in a series of 11 weekly meetings the Initiative has organized for I.V. stakeholders to discuss the specific framework of an I.V. CSD. As stipulated in Assemblymember Das Williams’ Assembly Bill 3, an I.V. CSD would have the ability to contract additional law enforcement from the County of Santa Barbara, and the University of California could supplement current law enforcement.

This Halloween weekend, I.V. Foot Patrol and the Santa Barbara Sheriff’s Office (SBSO) used the same tactics as in past Halloween and Deltopia events, focusing on increased law enforcement, medics, first aid, fire and search and rescue, according to IVFP Lieutenant Rob Plastino.

Plastino said most of these services were used minimally or not at all due to small crowds, and said the same amount of resources may not be necessary for future Halloween weekends.

“As things mellow out in Isla Vista, we can continue to reduce our presence during major events like that because they’re not so major any longer,” Plastino said. “There certainly isn’t a threat to the public, so you can scale back law enforcement when that occurs.”

Plastino said he was worried about the large police presence intimidating some people, but the overall response from I.V. residents was positive.

“I was concerned that up-staffing of law enforcement might be negative to some people,” Plastino said. “I was very mindful of that, but that wasn’t what we heard out on the street. It was a good feeling.”

UCSB Police Department Lieutenant Mark Signa said law enforcement was “toned down” this year and campus events such as Delirium helped to make this year safer than past Halloween weekends.

“All these things came together,” Signa said.  “Our biggest issue of the weekend was trying to get students into the concert. You really couldn’t ask for a better problem than that.”

Signa said the UCIV, a program coordinating volunteers to mediate between law enforcement and I.V. partygoers, was successful during Halloween weekend and should operate more often.

“Hopefully we’ll be into further talks about extending UCIV into a yearlong program that’s not for just major events,” Signa said.

Signa said although he supports the program, he is concerned about a partnership with UCIV and the local law enforcement creating a “stigma” against UCIV volunteers.

“My major issue with being too involved with law enforcement in the program is attaching that vibe to it — and then you start losing some of the effectiveness with students,” Signa said. “I want us to be involved as much as possible in the training and the encouragement and support, but at the same time still have that independence.”

According to vice president of the I.V. Downtown Business Association Jay Freeman, the lack of visitors on Halloween hurt local businesses by detracting from their usual crowds.

“There needs to be some way of thinking about the problem of the events in the area that’s not ‘let’s just totally shut down the existence of events,’” Freeman said.

Santa Barbara City College trustee and UCSB alumnus Jonathan Abboud said some I.V. residents are interested in a sobering center where I.V. partygoers can go as an alternative to jail. The center would include an alcohol and drug education program.

“The main thing we are trying to find is funding for it,” Dela Cruz said.

Field organizer for Williams’ Office Cameron Schunk said encouraging some visitors to come to I.V. every weekend, instead of attracting large crowds on Halloween and Deltopia, would help businesses without negatively affecting the community.

“I’m looking at a model where every weekend is an opportunity where we set up things that will attract visitors and we have structure in place to handle those visitors,” Schunk said. “So it’s not we just get hit every once in a while with a big rush of people — it’s every weekend we expect visitors — we want them because they’re going to bring revenue.”

A version of this story appeared on page 8 of the Thursday, November 5, 2015 print edition of the Daily Nexus.