The Daily Nexus
Water Polo
Gauchos Driven by Desire to Upset Top Ranked Bruins, Travel to No. 16 UCSD After
November 5, 2015 at 5:02 am by Jorge Mercado

After a triumphant weekend victory, the No. 6 UCSB men’s water polo team will look to shock the Mountain Pacific Sports Federation world by pulling off an upset at No. 1 undefeated UCLA this Friday. After that match, the Gauchos will head to San Diego to play the No. 16 Tritons in a non-conference battle.

“We had a good weekend,” senior attacker Derek Shoemaker said. “We have a tough weekend coming up and we got to be prepared.”

Santa Barbara is currently in sixth place in the MPSF standings. With one more conference victory the Gauchos will lock up the sixth seed in the MPSF championships, meaning they will avoid playing a tie-in game.

UCSB heads into the weekend with a respectable 14-8 overall and 3-4 conference record. The No. 1 team in the nation will host the Gauchos Friday night with intentions of protecting its perfect 22-0 overall record and 6-0 MPSF record. UCLA has won 25 straight matches dating back to last year, including its National Championship victory over USC. The Tritons host Santa Barbara Saturday with an average 11-11 record but a solid 4-1 record in WWPA conference play. 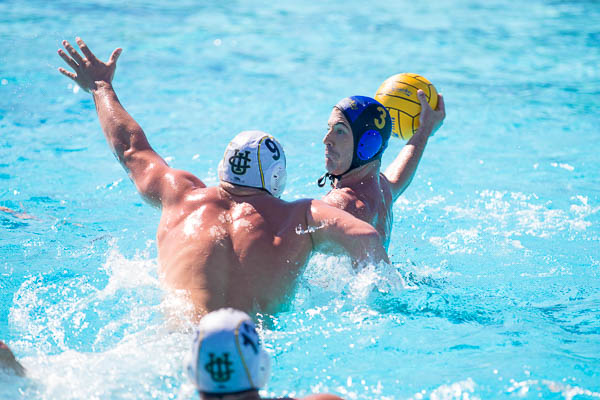 The last time the two teams met was one year ago at Campus Pool. UCSB almost pulled off a miraculous comeback after being down 6-1 at halftime, but fell just short as UCLA won 10-7. The Bruins’ 25-game winning streak is their second longest in program history. They have also won 21-straight MPSF conference games dating back to 2013. With a victory Friday night, UCLA will lock up the first seed in the MPSF championships; therefore, the Gauchos can expect the utmost effort from the Bruins.

“We are playing the No. 1 team in the nation,” Shoemaker said. “They’re probably the best team I’ve ever played. We are all super excited.”

The No. 1 team is led by junior attacker Ryder Roberts, who is currently the team leader in goals with 39. The junior was also named MPSF player of the week for Oct. 5-11 after leading his team to a SoCal Invitational championship. Roberts has scored at least two goals in his last six matches. Sophomore attacker Max Irving is another player to watch out for as he is second on the team in goals with 31.

On the defensive side, junior goalkeeper Garrett Danner has played excellently for the Bruins, racking up 143 saves over the course of the season. Danner also received MPSF Player of the Week honors on Sept. 21. His great play has helped UCLA to outscore opponents 304-112.

In order to pull off the upset, Santa Barbara will need big performances from Shoemaker who leads the team in scoring with 34 goals and senior two-meter Nick Jordan who leads the team with an impressive .435 shooting percentage. Sophomore Shane Hauschild will also be key as he has cracked 30 goals for the second-straight season.

Defensively, the Gauchos will look to count on junior attacker Mitchell Hamilton, who has a team-high 18 steals this season. In addition, UCSB has arguably one of the best goalkeepers in MPSF history in Chris Whitelegge. The senior has cracked the top five in MPSF all-time saves leaders with 826. Whitelegge’s 10.8 saves per game is top three in MPSF and his 0.59 save percentage is one of the best as well.

“We just got to focus up on defense.” Whitelegge said. “They move a lot, they’re fast, they counter hard, we just gotta stay with them.”

The Gauchos’ next match is at UCSD Saturday night. Although its record may not be mind-boggling, UC San Diego is a solid team that UCSB cannot underestimate. The two teams last met about a month ago at the SoCal Invitational with Santa Barbara winning 12-8. In that match, Whitelegge recorded an amazing 16 saves.

“They have a great home crowd,” Whitelegge said. “we look forward to taking it to them hopefully and getting a good win on the road.”

The key player for the Tritons is senior utility Chase Cockerill. He currently leads UCSD in goals scored with 47 on the season, and he scored three goals in the team’s previous match against UCSB. Cockerill also leads the defense with 34 steals. Young redshirt freshman goalkeeper Jack Turner has obtained 153 saves on the season while junior driver Andy Moore has recorded 31 steals, second most on the team.

The Gauchos have an amazing opportunity Friday as they play the No. 1 team in the nation. This team has shown time and time again they can beat quality opponents, but they have yet to do so. What better time to do it than two weeks before the MPSF championships? A win against UCLA won’t be easy, but it would definitely be a good sign that this UCSB team is ready to compete with the powerhouse programs that have run the conference since its inception.

“Honestly we are extremely confident we can win,” Shoemaker said. “We just have to work hard and execute.”