The Daily Nexus
Sports
Fresh Start for Bonnie and the Gauchos
November 5, 2015 at 5:00 am by Sean White

The long awaited opportunity for a first look at the renovated UCSB women’s basketball team is finally nearing its end. The Gauchos are set for their first exhibition game of the season this Sunday, hosting Cal State Dominguez Hill. 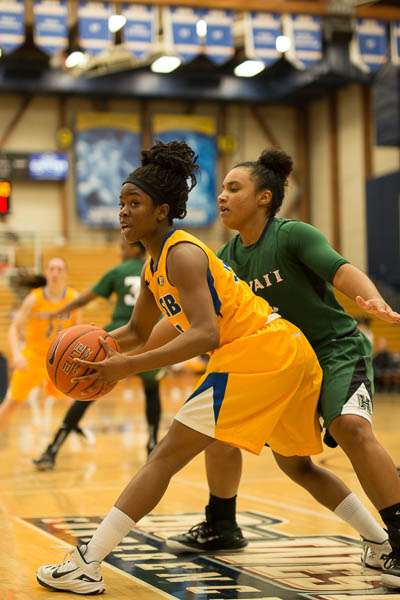 A team with 10 returners, four recruits, three transfers — two that will redshirt due to NCAA transfer regulations — and a new coaching staff with Head Coach Bonnie Henrickson at the helm in her first year. The rebuilding process of the UCSB program is a fascination for many of its supporters as Santa Barbara hopes to exceed last year’s last-place finish of 2-27 overall and 2-14 in the Big West.

Just last Tuesday, the Big West Preseason Media Polls results were released. According to the voting committee, UCSB is predicted to finish at the bottom of the Big West after receiving just 26 points. While its focus remains on its new beginnings as a team, it is expected that the chatter of the critics and naysayers will be a motivating factor for Santa Barbara.

Despite being in a reconstruction phase, UCSB’s return of 10 players preserves some familiarity on the court. At the forefront of the Gauchos’ lineup is junior point guard Onome Jemerigbe. She led UCSB with a team-high 8.6 points and 4.0 assists per game last season. Her assists per game average ranked sixth overall in the Big West, increasing to fourth-best in conference games with a 4.4 average.

During the 2014-15 season, Jemerigbe recorded career-highs with 16 points against Cal State Bakersfield and nine assists against San Diego State. Most importantly, her efficiency when facilitating the ball resulted in her 1.3 assists/turnover ratio on the season.

With Big West All-Freshman Team and Honorable Mention honors under her belt, it was no surprise that the floor general was named to the College Sports Madness All-Big West Preseason Second Team.

While Sunday will be the first glimpse of the Gauchos in action, it will be the fourth game for Dominguez Hills this season after participating in the Disney Classic Tournament this past weekend. CSUDH is 1-2 overall after losing its first two games to Winona State and University of Alaska Anchorage, but earned its first victory with a 68-63 win over William Jewell College this past Sunday.

They also finished as the CCAA regular season co-champions with Humboldt State, finishing with an overall record of 26-7 and 19-3 in conference games. A total of four players averaged double digit points per game throughout the Toros’ journey to their conference championship. Returning from the bunch are senior guards Breanne Garcia and Monay Lee.

Both were named to the All-CCAA First Team last season and have been MVP’s of their team’s last two conference tournament championships, Lee in 2013 and Garcia in 2014, respectively. Additionally, Lee was named a Second-Team Daktronics All-Region Selection in 2013.

Garcia was the Toros’ leading scorer last year, averaging 15.3 points per game which ranked fourth in the CCAA. So far this season, the trajectory of her play is headed in a similar direction as she leads the Toros with 16.3 points per game and is coming off a season-high 20 point performance, 16 of which she scored in the second half. Next in line for the team-high in scoring is Lee with 11 points per game. She averaged 6.8 rebounds per game last season and currently ranks second on the team in free throw percentage at 81.8 percent.

Sunday’s game versus CSUDH is UCSB’s only exhibition game before its season opener on Friday, Nov. 13. It will begin at 1 p.m. in the Thunderdome. It is intriguing as to how the Gauchos will fair in their first game as we all know the drastic difference between practice and in-game situations.

A version of this article appeared on page 10 of November 5, 2015’s print edition of the Daily Nexus.