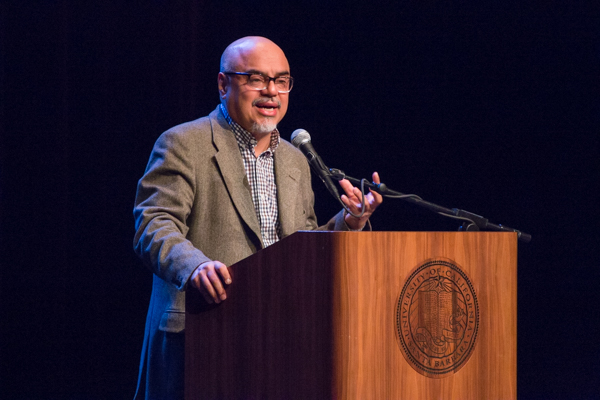 In Deep Down Dark, Tobar recounts the experiences of the 33 miners trapped underground for 69 days by the 2010 cave-in of a copper-gold mine in San Jose, Chile. Tobar was the only journalist the miners granted permission to record the story.

In an interview preceding the lecture, Tobar said coming from an immigrant, Latino family, he felt like an “outsider” in higher education, which he believes ultimately “served him well” as a journalist and author.

“I always felt like I didn’t get a great education and I was with all these people who had been really well educated,” Tobar said. “It turned out that those qualities that you have as someone who is an outsider and someone who is maybe more humble, those are great qualities to have when you’re a journalist, because it breaks down the barrier between you and the person you’re interviewing.”

Tobar said one miner he interviewed said he reflected back on pivotal moments of his life in the moments leading up to his ultimate rescue.

According to Tobar, the experience of longing to return home and ultimately escaping the mine was like “rebirth” for the 33 miners.

“What it became for me was a story about men who want to return home,” Tobar said. “They want to be reborn into the lives they had before, they want to go back home to the routines of family.”

Tobar said interviewing the miners and understanding what they valued amid the mine cave-in caused him to reflect on his own life.

“In being trapped, in seeing their own deaths, in that time they have to think, they realize that the best thing about them was all the love they brought into the world and all the love that surrounded them,” Tobar said. “That’s what I’ve learned, and as a result of this project I think I value even more my own life.”

Tobar said despite his accomplishments as a journalist and author, his greatest pride comes from his family.

“I have many great things that have happened in my life, but the thing that I am most proud of, the best thing about me is that I’ve been married for 22 years and am a father of three kids.”

Tobar said family is an “extremely powerful force” during challenges times such as the months the 33 miners spent trapped below ground.

“The miners are back at home and they are fathers, husbands and providers once again,” Tobar said. “They now have the experience of living through an adventure that has taught them the value of the simple things.”

Third-year Maria Garcia said she found Tobar’s lecture interesting because she did not previously understand the intensity of what the miners underwent.

“I felt like I got a personal perspective on what they went through, how they suffered and what they had to go through after they came out. It was a really good lecture and I’m really glad I got to see it,” Garcia said. “And now I’m looking forward to buying the book because of everything he said, it was really interesting.”

Third-year Itzel Cruz said Tobar’s lecture gave her an “inside perspective” on the miners’ story.

“Seeing it on television is a completely different version than it being told by the writer itself, who personally interviewed these people, stayed with them and got to know each one of them on a personal level,” Cruz said. “You can identify yourself with the Chilean miners and the writer.”

First-year journalism major at Santa Barbara City College Logan Keaton said Tobar is a “great speaker,” and the lecture made him consider the miners’ experiences in a more personal way.

“I was amazed at how he got so close with all the miners,” Keaton said. “The different testimonies and experiences that all the miners had, those were inspiring and sad at times. It puts you into perspective looking at the world and everything. You can’t take anything for granted.”