The Daily Nexus
Water Polo
Gauchos Rise to the Occasion in Senior Day Duel
November 1, 2015 at 9:25 pm by Jorge Mercado 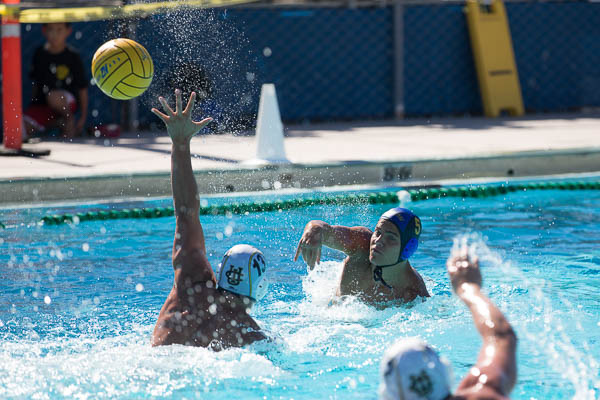 Despite emotional circumstances of Saturday’s match being senior day, the No. 6 UCSB men’s water polo team prevailed in its defense of Campus Pool one last time this season for a much-needed, triumphant 6-5 victory versus No. 7 UC Irvine.

“The game went our way,” Head Coach Wolf Wigo said. “We played great defense all day and we got a big victory.”

The clutch win improved the Gauchos’ overall record to 14-8 and makes them 3-4 in MPSF play. After losses to UCSB and No. 5 Stanford today, Irvine sits at 11-8 overall, 1-4 in conference matches. The Anteaters are currently on a five-match losing streak.

With it being senior day, the crowd was packed not only to see the Gauchos win but also to send off the five seniors that have mightily contributed to this team. Even prior to the match’s beginning fans frantically cheered. Fortunately the support of the Gauchos’ fan base did not go to waste as they witnessed UCSB pull off an incredible comeback to earn a last second victory.

“Senior day, crowd roaring and a last second victory,” senior goalkeeper Chris Whitelegge excitedly explained. “This is a storybook ending for us seniors.”

The match began with sophomore attacker Shane Hauschild netting a beautiful deep goal to get the Gauchos rolling. However, that would be the only goal UCSB would score in the first half. The first quarter ended with Santa Barbara up 1-0 but UCI added two goals in the second courtesy of junior utility Kyle Trush, and senior driver Jared Osborn to give the Anteaters a 2-1 halftime lead.

The action picked up heavily in the third with UCI scoring quick on its first possession thanks to junior driver Lovre Milos. UCSB countered with a score of its own on the next opportunity to keep the deficit at one but Milos answered back on the next possession to give the Anteaters a commanding 4-2 lead.

The frantic pace slowed down a bit until Milos netted his third goal of the quarter to take a 5-2 lead. Just as hope seemed to be dwindling, freshman attacker Spencer Likins made a huge goal for the Gauchos with just under 30 seconds left to pull them to within two scores.

A two goal deficit heading into the final frame is not an easy thing to come back from, but on a day that held much significance, there was no way UCSB’s seniors were going to let this game get away. The quarter commenced with senior two-meter Liam Gaughan scoring a beautiful skip shot as the shot clock was expiring to bring the Gauchos within one. Later senior two-meter Nicholas Jordan made a great field block which eventually led to the game tying goal for the Gauchos.

After UCI missed its final chance to take the lead, UCSB was left with 19 seconds and possession of the ball to try to win the match in regulation. The storybook ending came to fruition when Santa Barbara took the pool and senior attacker Derek Shoemaker scored the game-winning goal with .08 seconds left, giving the Gauchos the 6-5 victory.

“It was just amazing,” Shoemaker stated while in awe. “I was a bit cold starting the game but my teammates believed in me and one went in when it really mattered.”

The crowd roared after the final shot went in and joy seemed to strike every Gauchos’ face. A captain, team leader and most importantly senior made the biggest shot of the year for this team.

“It was awesome for him to make that shot,” Wigo said. “Everyone is stoked for the way that turned out.”

The outstanding performance of Whitelegge in his last home match as a Gaucho must be acknowledged as well as he made 11 incredible saves and whose great defense helped limit UCI to only five points. With those 11 saves, the senior became UCSB’s all-time saves leader and is now sixth all-time in MPSF career saves.

“It’s so awesome I can’t even lie,” Whitelegge said. “To do it here on senior day in front of the crowd and my parents, it was just a great day overall.”

Once again the Gauchos showed their resiliency in the pool and showed why they are a top MPSF team. The five seniors: Chris Whitelegge, Derek Shoemaker, Nick Jordan, Liam Gaughan, and Bryan Snyder all made great contributions both in and out of the pool throughout their time at UCSB and they have our admiration and best wishes as the season comes to a close.

“All five guys are great and have made great contributions.” Wigo said. “They all influenced our team all these years and I could see they wanted this game. Congrats to them.”

Santa Barbara’s next match is Friday, Nov. 7th at undefeated UCLA at 7:00 p.m.