Amid concerns of anti-Semitic threats on UC campuses, the Board of Regents held an open forum Monday to discuss revisions to the definition of anti-Semitism 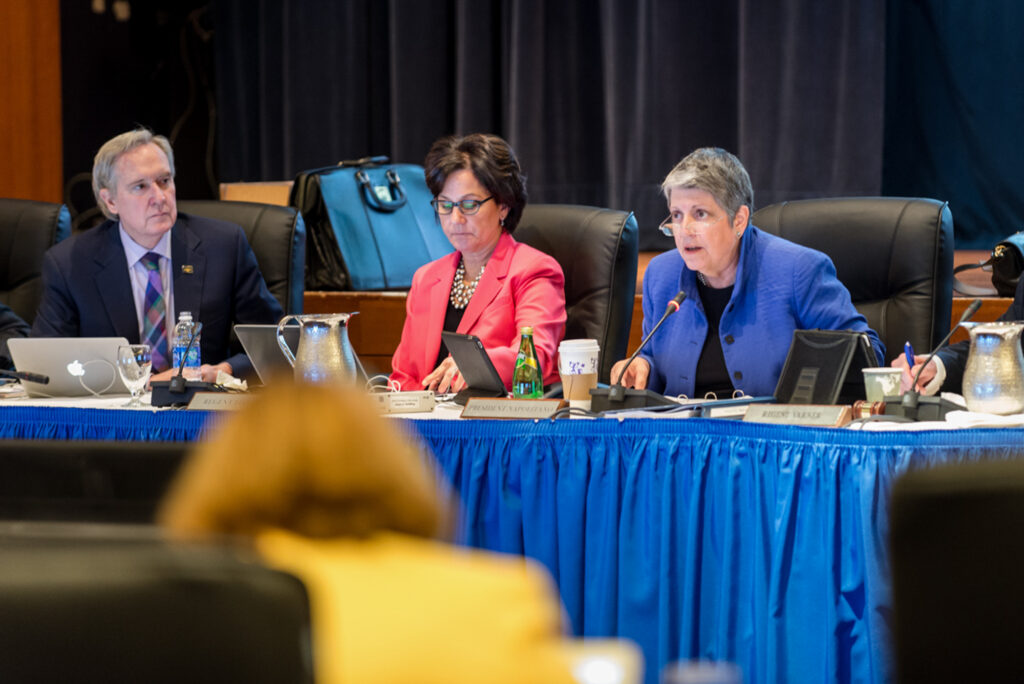 Many Jewish students felt threatened during anti-Israel protests and demonstrations, spurring Jewish groups and initiatives, such as the AMCHA Initiative, to push for the UC Regents to adopt the U.S. Department of State’s definition of anti-Semitism. Nexus File Photo

The UC Board of Regents held a public forum on Monday at UC Los Angeles to discuss revisions to the definition of anti-Semitism in the Statement of Principles Against Intolerance document, which was presented to the board in September.

The Board of Regents selected a working group in September to host the forum in response to a recent push for the UC system to adopt the U.S. Department of State’s (DOS) definition of anti-Semitism. The DOS has defined anti-Semitism with regard to Israel as demonizing, delegitimizing or applying a double standard to the country. The issue of anti-Semitism began to gain attention after Jewish students said they felt threatened during student movements to divest from companies allegedly profiting from human rights violations in Israel-Palestine.

“The regents who spoke out at the meeting in September were very clear that the reason that they rejected the statement that had been offered to them … was because it did not address the problem of anti-Semitism and that was the very reason for which the statement had really been initially drafted,” Rossman-Benjamin said.

According to Rossman-Benjamin, many Jewish students have felt threatened by campus organizations pushing for divestment.

Executive Director of Santa Barbara Hillel Rabbi Evan Goodman said there has been an increase in anti-Semitism on UC campuses.

“In recent years, anti-Semitism has roared back, most notably on university campuses, and especially on our UC campuses,” Goodman said. “It adversely affects the education and lives of our students. This hostile environment causes prospective students to think twice about enrolling in the University of California.”

Goodman said Jewish students do feel their entire identity is being questioned when confronted with the “condemnation” of Israel.

“When the one Jewish state in the world is obsessively singled out … Jewish students recognize that their own religious and cultural identity is being called into question,” Goodman said.

According to UC Committee of Academic Freedom representative and UCSB professor of history Erika Rappaport, there are already adequate policies in place to address anti-Semitic actions, and it is important to maintain student and faculty members’ freedom to express their beliefs.

“If someone does do something that incites violence, there are already policies in place to react to that. It’s very important that we have civility on campus and we don’t have anti-Semitism — I feel very strongly about that,” Rappaport said. “But I also think that we do have policies in place and we don’t want to be targeting people for criticizing Israel and equating that to anti-Semitism.”

Rappaport said an important aspect of attending a university is the ability to openly discuss controversial issues.

“That’s one thing I think the university’s so great about, is to discuss these issues and not just censor them and not be able to talk about them,” Rappaport said.

Northern Vice President of UC’s Student-Workers Union (UAW 2865) David McCleary said the adoption of the DOS definition of anti-Semitism could infringe on the academic freedom of both students and professors.

McCleary said Judaism and the Israeli government are two separate entities that shouldn’t be used interchangeably.

“This is a debate over Zionism, which is a political ideology,” McCleary said. “This is not a debate over Judaism, and in fact, as a Jew myself I find it equally anti-Semitic — the conflation of my Jewish identity with actions of the Israeli government.”

Rossman-Benjamin said the DOS definition of anti-Semitism, if implemented, would only act as an identifier and would not infringe upon freedom of speech.

“From the Jewish perspective — the perspective of many Jewish students and many Jews worldwide — when certain kinds of political expression include certain characterizations of Israel or deny its right to exist, then it moves into, for the vast majority of Jews, anti-Semitism,” Rossman Benjamin said.

A version of this story appeared on p. 9 of the Thursday, October 29 issue of the Daily Nexus.