Not So Heroic, Heroin 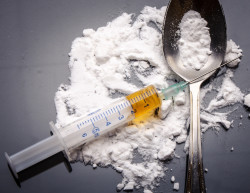 First synthesized in 1895 by Heinrich Dreser, who worked for the Bayer Company in Germany, heroin was originally marketed as treatment for a variety of illnesses, such as asthma, bronchitis, tuberculosis and phthisis — any progressively wasting condition. When it reached the U.S. in the early 1900s, it was seen as a potential solution to the increasing problem of morphine addiction since it was advised as “non-addictive.”

Heroin is a derivative of opium, derived from the unripe seedpods of the opium poppy. Heroin, along with codeine and morphine, is created after some chemical altering. Due to this, its effect are similar to those of opium abuse.

According to pbs.org, “Heroin causes a pleasant, drowsy state, in which all cares are forgotten and there is a decreased sense of pain (analgesia).” This effect led it to being called “heroisch,” the German word for “heroic” by German doctors.

Once ingested, it is metabolized as morphine. As stated by drugs.com, “The short-term effects of heroin abuse appear soon after a single dose and disappear in a few hours. After an injection of heroin, the user reports feeling a surge of euphoria (the “rush”) accompanied by a warm flushing of the skin, a dry mouth, and heavy extremities.” Other effects that happen to the body include slowed breathing, slowed and slurred speech, dilated pupils, nausea and vomiting, as well as constipation.

With regular heroin use, the abuser develops a tolerance, which leads them to use more and more in order to achieve the same effects. If injected, chronic use can lead to collapsed veins. Pbs.org also lists “infection of the heart lining and valves, abscesses, cellulites, and liver disease” as other effects from long term use.

Over time, higher doses are used and a physical dependency and addiction develop. The body has become accustomed to the drug and without regular use, the user will experience withdrawal symptoms. The effects of withdrawal include restlessness, muscle and bone pain, insomnia, diarrhea and vomiting, cold flashes with goose bumps (“cold turkey”), kicking movements (“kicking the habit”), along with others. While heroin withdrawal is occasionally fatal, it is considered less dangerous than alcohol or barbiturate withdrawal.