The Daily Nexus
Sports
UCSB Pushes Win Streak to Four With Wins over UCR and UCI
October 26, 2015 at 8:30 am by Elliot Thornton 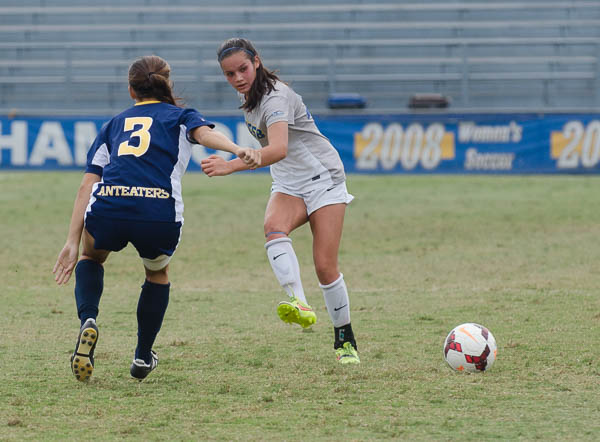 It wasn’t the easiest or the prettiest of matches, but the UCSB women’s soccer team added on to its four-game winning streak this weekend after a two-game home stand against UC Riverside and UC Irvine.

“The important thing about this weekend is it took the pressure off us having to get a result on the road [next week],” said Head Coach Paul Stumpf. “We know we have extra credit from these two wins [at home].”

The Gauchos took a 3-2-overtime victory Friday night over the Highlanders and a late 1-0 win Sunday afternoon against UC Irvine, improving to an overall record of 12-4-1 and 5-1 in the Big West. Riverside and Irvine finished the weekend with a conference record of 3-3 and 2-4.

The stage was set Friday as the Gauchos honored its three seniors Angelisa Cortez, Beth Ritter and Savannah Francis against 9-7-0 UC Riverside. UCSB put the first points on the board in the 8th minute as freshman forward Mallory Hromatko took a line drive pass from sophomore forward Amanda Ball launching a kick to the right side of the net. Senior goalkeeper Elizabeth Silas made a play on the ball but gave Hromatko just enough time to regain possession and sink a shot in the upper left corner.

The Danville native’s goal gave her eight on the year, third place in the Big West and the most among any freshman. UCSB took a 1-0 lead after Hromatko’s score.

The Highlanders responded with two goals of their own both in the second half by freshman defender Darielle O’Brien. O’Brien’s first goal came off a corner kick in the 55th minute that flew past a line of UCSB defenders into the top right of the net. Following this, the freshman defender beat her man off a cross from the left side. O’Brien made her way towards goal and punched a chip shot in a similar spot to her first goal.

After freshman forward Jessica Parque set the equalizer in the 72nd minute, the two teams ended regulation with the score tied at two apiece.

Heading into extra minutes, the Gauchos wasted no time in putting the match away. In the 104th minute Santa Barbara led an attack down the right flank as Ball set up sophomore midfielder Chase Schornstein for an easy game-winner. Schornstein’s goal to the bottom left corner marked her third score of the season and her first in conference play.

“In this conference there is nothing easy,” said Head Coach Paul Stumpf. “[As a coaching staff] we know how hard these student athletes work. When they get rewarded for that effort and those final minutes, that has to be the most [satisfying] feeling for us.”

The Gauchos racked up seven corner kicks in their 3-2 victory along with 10 shots and three shots on target. Senior goalie Beth Ritter also made two in the 87th minute that kept her team locked at 2-2.

Friday night couldn’t have ended on a more perfect note as this match was dedicated to the seniors on the team.

“Our main [goal] was heading into the match winning it for our seniors, especially since our team hasn’t made it to the Big West Tournament since 2009,” said Hromatko. “Our seniors have never been there and as a team we wanted to give them that opportunity to get as many wins so that we could get into that tournament.”

UCSB’s last trip to the Big West Tournament ended in a 1-1 draw to Long Beach State in the conference finals. Stumpf is grateful his seniors’ drought without a Big West appearance will come to an end.

“We punched our ticket to the tournament with today’s win. This group of seniors hasn’t made it to the Big West, so for the first time in a couple years they get the whole deal.”

Following a hard fought win on Friday, the Gauchos had their work cut out for them facing a physical 6-9-1 UC Irvine team. The Anteaters headed into Sunday’s match coming off a 2-0 blowout on the road at Cal Poly. While their record did not show it, the Anteaters came prepared for a much bigger UCSB team in a game that could potentially knock them out of Big West contention.

The Anteaters’ scrappiness proved to be a problem for the Gauchos as the majority of the first half was a battle for possession. Despite a season-high six corner kicks in the first half, all from junior midfielder Dakota Griggs, UCSB could not capitalize on their opportunities, heading into half with the score tied at zero.

“I think we struggle with our second chances a lot,” said Griggs. “We get our head on it the first time but we need to do a better job getting [the ball] into a scoring position to make up for our second chances.”

After a slow-paced second period, UCSB finally got the breakthrough it needed in the final minutes from none other than Hromatko.

The freshman’s number was called in the 87th minute off a nice touch pass from Ball. Hromatko dribbled laterally past a group of defenders towards the middle of the penalty box. With her momentum drifting left and a swarm of defenders on her back Hromatko took a dead stop and shot a line drive down the middle to the lower left area of the goal. This late goal was all the Gauchos needed to take a 1-0 victory in dramatic fashion.

“That was a great ball in by Amanda,” said Hromatko. “Our coaches were telling us to start connecting with each other more, so that was a great pass by her. I was able to feel a defender on my back and turn a shot on them since we only had a couple minutes left [in the game].”

The Anteaters’ loss marks UCSB’s seventh shutout of the season. After its second straight weekend sweep, Santa Barbara looks to be in good shape heading to its final two matches against No. 1 ranked Cal State Fullerton and No. 4 ranked CSUN.

The Gauchos will resume action next Thursday, Oct. 29 in a 7 p.m. matchup against Fullerton. The match will be featured on ESPN 3. UCSB will wrap up conference play on Sunday against Northridge at 2 p.m.