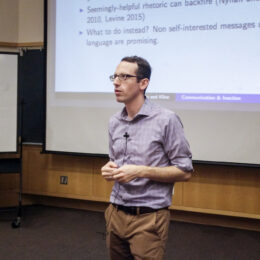 Assistant Professor in the Department of Government at Cornell University Adam Seth Levine hosted a seminar titled “Citizen Engagement (and Disengagement) in Response to Climate Change” to discuss the communication of climate change at Bren Hall Thursday afternoon.

Levine presented research on how personalizing information about environmental issues affects people’s attitudes. Levine’s research is based on an experiment in which he gave sheets presenting the issue of climate change to different subject groups with varying degrees of urgency and observed which participants chose to sign a petition in support of political action on climate change. He found those who received more personalized, urgent information were less likely to want to engage in a solution.

“It might have cognitive consequences which might decrease the belief that because the really important goal is difficult to achieve, perhaps what I need to do is conserve my resources to focus on those goals,” Levine said. “What we are finding is that seemingly helpful rhetoric can backfire in [a] really important and consequential way, and that it is important to highlight that,” Levine said.

“It is a belief that you should make things more personal because somebody can find those connections,” Graff said. “So I did think it was really interesting that sometimes that actually does the exact opposite.”

According to Graff, using fear tactics to motivate people to act on environmental issues is ineffective.

“There has generally been a shift in climate change communication to it being a doomsday kind of thing,” Graff said. “It will be difficult, but there are ways to approach it in a manageable way — more of focusing on people’s ability of what they can get done.”

“Maybe one of the reasons that the messaging against climate change has been so effective [is] because it kind of gives people the option to not do anything about it” Handelman said.

“Somebody has actually done evidential research on what it is that motivates people to do environmental action,” Bernstein said.

I appreciate that I got to attend Levine’s talk…The bottom line I left with was when people feel sad about a topic they are less likely to engage with action of any sort be it time or money.