The Daily Nexus
Sports
No. 19 UCSB Downs UC Davis in First of Crucial Three-Game Homestand
October 22, 2015 at 5:08 am by Michael Jorgenson 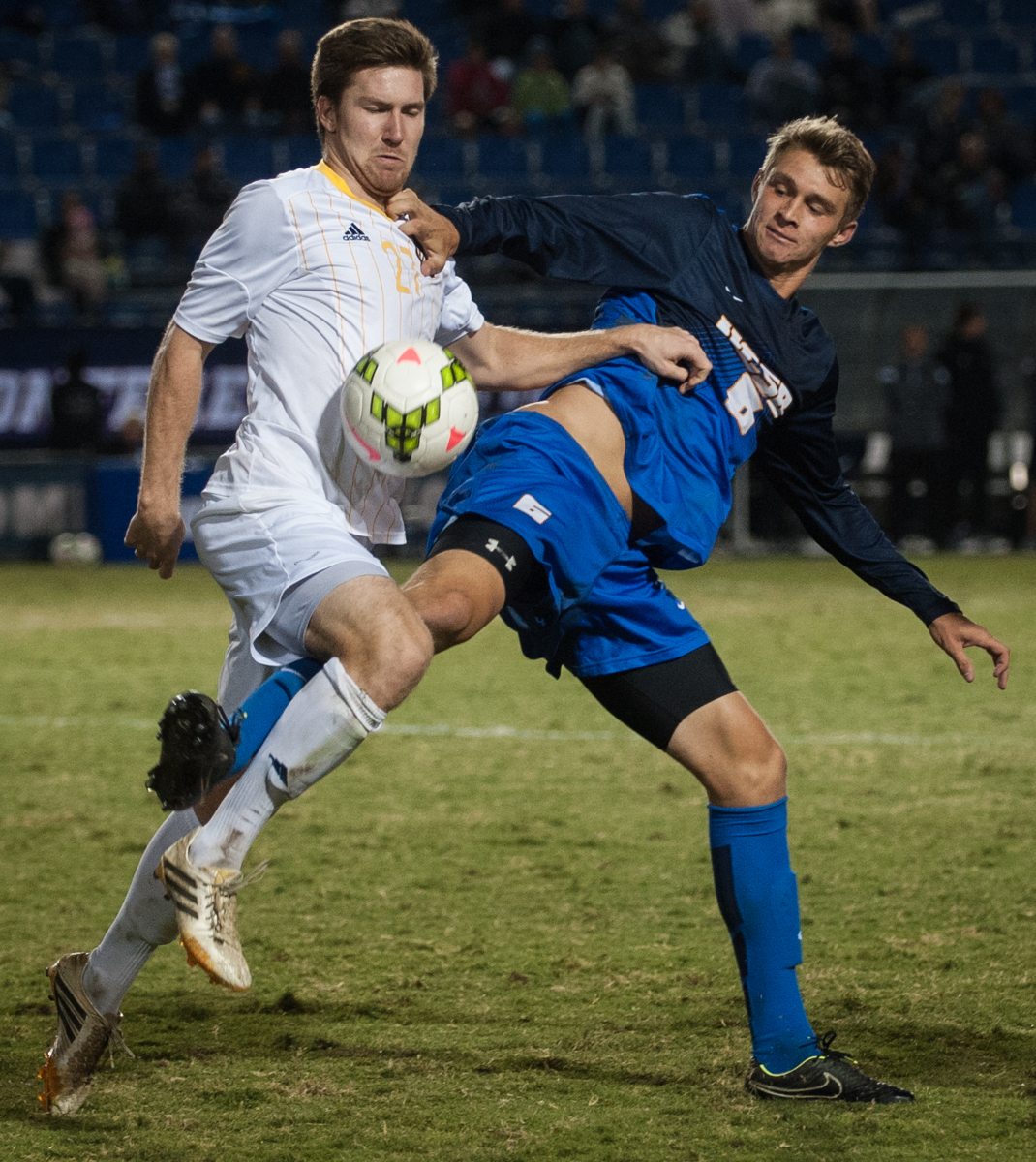 The UCSB men’s soccer team had a successful, albeit frustrating return to Harder Stadium last night as it found a way to get back into the win column. Sophomore midfielder Kevin Feucht scored twice from the penalty spot, giving him four goals in the last four games, as he led his team to a crucial 2-1 victory over UC Davis.

“Really the story of tonight is we did enough to win and that’s all there really is to say about it,” Head Coach Tim Vom Steeg said after the game.

The win ends a two-game losing streak for the Gauchos, keeping them just one point in front of No. 20 Cal Poly for first place in the Big West North Division. UCSB is now 10-5-1 overall and 5-2 in conference, while the Aggies, who had gone undefeated in four straight, fall four points out of first at 7-7-2 overall, 3-2-2 Big West.

Playing without junior midfielder Josue Espana, who was suspended after picking up two yellow cards in UCSB’s game last Saturday at Cal Poly, the Gauchos struggled to find a flow on their offensive half.

“Josue has started and played basically every minute for us and he controls the middle of our field. That made a huge difference,” Vom Steeg said. “Without him in the game, we were lost.”

Fortunately for the Gauchos, a pair of crucial mistakes by Davis defenders cost them the game.

After controlling the game through the first 15 minutes, midfielder Seo-In Kim brought the ball down the right flank before sophomore defender Greg Salazar’s attempted clearance came right back down off Kim’s arm. The junior transfer from Duke quickly recovered the ball before sending in a cross, ironically coming off of Salazar’s arm this time and resulting in a UCSB penalty.

“There are referees where literally no matter what happens on the field, they’re not going to call it,” Vom Steeg said. “The referee tonight will call PKs. Definitely the arm was stretched, so I thought that first one was a good PK call.”

It was Feucht who stepped up to take the penalty for the Gauchos, as he did against Cal State Fullerton in UCSB’s last home outing 11 days prior. The German showed great composure from the spot, seeming to hesitate at the last moment before taking the shot. After seeing Davis redshirt junior goalkeeper Armando Quezada go left, Feucht calmly slotted the ball into the right corner, giving the Gauchos an early 1-0 lead.

“The first half we were moving so well. It was just a matter of time,” Kim said. “Fortunately, we got a cross and [Salazar] handballed it, and Kevin of course is going to tuck it away.”

Following a solid first 20 minutes of play, UCSB was unable to establish any kind of offensive flow for the rest of the first half. As the second half kicked off, momentum quickly turned the Aggies’ way, as they forced turnovers in the Gauchos’ defensive third and came close to scoring on a number of occasions.

Davis finally found an equalizer in the 74th minute off a long throw into the box. A scramble for the ball resulted in a poor defensive clearance from just in front of goal and junior defender Steven Guzman capitalized, lobbing a header over freshman goalkeeper Justin Vom Steeg from about eight yards out to tie the game at 1-1.

“In general, I thought we did decent [defending] the throw in,” Vom Steeg said. “But you put enough bodies inside the six yard box and bounce it around and do it 15 times… I hope everybody knows it’s not really soccer.”

The Aggies’ unorthodox attacking methods brought them level with UCSB, but not for long. Just 70 seconds after the equalizer, junior forward Nick DePuy beat his defender in the box before being dragged down by a reckless tackle from senior defender/midfielder Lucas Mohageg, awarding UCSB its second penalty of the night.

“Nick did a good job of dropping his shoulder and getting in front of [Mohageg],” Vom Steeg said. “As a defender at that point, I’d let him go a little bit, but the minute Nick got in front and the defender now is trying to save the day with a tackle, I would say around the world that one gets called.”

Once again, it was Feucht stepping up to put the Gauchos up by one, this time firing it into the left corner with no hesitation while Quezada dove to the right post. That would be the high moment of the game for Feucht, who celebrated with a spectacular flip after notching his fourth goal for UCSB in as many games.

From there, the Gauchos were able to hold on for the 2-1 victory, but they suffered another huge loss before the game was over. With just 4:33 remaining, a free kick that was awarded to Davis was delayed when Feucht kicked the ball away, resulting in his fifth yellow card of the season.

This means that UCSB will be without its best holding midfielder for an even more crucial matchup with second place Cal Poly this Saturday.

“The reason why it feels like a loss is because we did lose [Feucht] tonight on a fifth yellow,” Vom Steeg said. “We seem to make mistakes that really hurt us, and that’s obviously a mistake because there was no point. Now you’ve got two days to redo all your set pieces and your defensive marking because you’ve got to drop a new player in.”

Already facing the challenges of fatigue, injuries, and a top-20 ranked Cal Poly team that just beat UCSB 3-2 in double overtime last Saturday, Feucht’s suspension could not have come at a worse time.

“It’s really hard for me to walk in and scream, yell and get animated when the reality is the guys are giving you everything they have. At some point you just get tired,” Vom Steeg said. “You’re now deep into the bench. It’s why we carry 28 players and you’ll have to see a bunch of them Saturday.”

Despite his frustrations after a grueling contest, Vom Steeg was still able to find one silver lining.

“At least, good news, Josue will be fresh,” he said with a smile.

The Blue-Green rivalry game will be played for the second time in seven days this Saturday at 7 p.m. at Harder Stadium.

The Aggies will get their shot at revenge against the Gauchos in both team’s regular season finale at Davis on Halloween.