The UCSB women’s swim team will kick off its season this weekend with a home meet against two Pac-12 programs. The Gauchos will host the UCLA Bruins and Oregon State Beavers at Campus Pool on Saturday.

This meet will be the first on Santa Barbara’s record, whereas both UCLA and OSU have had multiple tournaments and meets already this season. The Bruins have found success in all their meets, while the Beavers have yet to notch a win on the season. 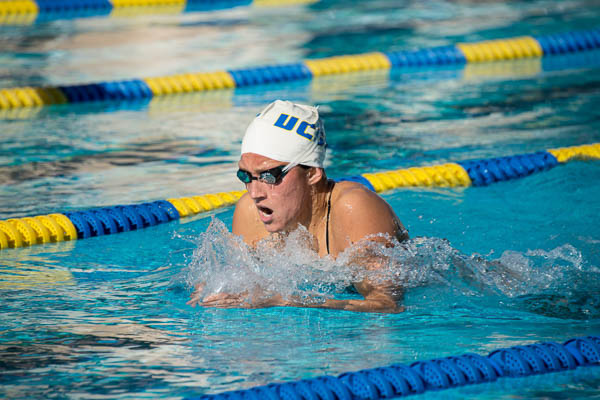 “Our women’s team looks very strong coming into this season,” Head Coach Gregg Wilson said. “We expect our seniors to really lead the way for us, and if our younger swimmers can make strides this year, we will be tough to beat.”

Senior breaststroker Katie Records will lead this competitive team of veterans that Coach Wilson has on his team this year. Records is coming off of a career season in which she captured three MPSF Championships in three different events across the postseason meet. Records earned a title in the 100-meter breaststroke, 200-meter breaststroke and the 200-meter Individual Medley. Records’ success made her the undeniable choice for the 2015 UCSB Female Athlete of the Year Award.

Joining the returners this season will be three new freshmen and two transfer juniors that are expected to add some depth to this already dominant Gaucho roster. Junior sprint swimmer Cheyenne Low and junior butterfly swimmer Kelsey Leonard will give the team a new look in some of the freestyle events for the team.

Leonard is coming off of an outstanding season at Diablo Valley College where she took home seven conference titles in different fly and freestyle events and is now the record-holder for each as well. She capped off the year at the CCCAA State Championships where she gained four more titles and broke two records before transferring to Santa Barbara.

UCLA will be a tough challenger for the Gauchos this weekend as the Bruins are coming off of a second-place finish at the SMU Classic just last week. In a pool of six schools, the Bruins tied the University of Missouri with 303 points in the meet, giving them a 40-point advantage over the next school.

The Bruins will likely pick on the weaknesses of the Gauchos in their meeting this week, as they are led by a dominant diver in sophomore Maria Polyakova. Polykova pushed the Bruins to their recent second-place finish, having added 16 points to her team’s score after defeating the other five divers in the 1-meter event. The Gauchos will have to make up their ground in between the lines as they do not have any divers on the roster.

Oregon State will be coming off of four straight losses, entering the weekend with losses to San Diego, San Diego State, Vanderbilt and Arizona State. The Beavers will have one more challenge before facing the Gauchos and Bruins this Saturday as they are set to face USC on the road this Friday.

Saturday’s meet is set to start at noon at Campus Pool.