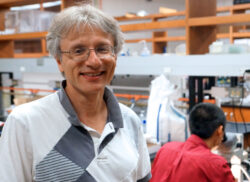 UCSB Professor of Neuroscience and Molecular, Cell and Developmental Biology Craig Montell has been awarded the Pioneer Award, which includes $2.5 million for research allotted over a five-year period. The Pioneer Award recognizes scientists who have innovative research ideas that are relevant in the field of biomedicine. Montell plans on using this funding to develop a new approach to suppress the population of mosquitoes that spread the infectious agents that cause dengue fever, which infects nearly 400 million people a year.

“Pioneer Awards are for high risk and high impact research,” Montell said. “A lot of the Pioneer ideas aren’t going to work out, but the ones that do will be incredibly transformative.”

The selection process for the Pioneer Award includes a precisely timed 30-minute interview, comprised of a 15-minute presentation and a 15-minute period for questions. A panel of specialists then scores the applicant’s interview.

“You can’t do this alone. I had a lot of help,” Montell said, referring to the submitted proposals, letters of reference and interview practice: a lengthy application process.

Montell currently works with fruit flies (Drosophilia melanogaster) to measure how temperature, light, gustatory and olfactory cue — among other factors — influence animal behavior. His pioneering work with transient receptor potential (TRP) channels, which are present in many species “from worms to humans” greatly increased the overall scientific understanding of sensory perception. Currently, Montell is looking forward to expanding his scope from fruit flies to mosquitoes, an animal he has never worked with before.

Montell plans on creating more improved transgenic male mosquitoes to decrease the number of female mosquitoes, which bite people and spread disease. Specifically, he will focus on a subcategory of mosquito called Aedes aegypti, which are the primary carriers of dengue fever.

“In the 1950s, dengue fever was rare, but it has increased 30-fold since the 1960s; it’s still on the rise,” Montell said. This is precisely why he believes that this is an issue that requires immediate attention.

Montell plans to combat the spread of the virus by releasing sterile male mosquitoes to mate with females, who mate only once. The females are rendered sterile as a result, and would not produce the next generation of mosquitoes.

“If successful, the approach would cause the population to crash,” Montell said. “Releasing sterile Aedes males has worked to some extent. The population has decreased, but not enough. When the males are released, they don’t compete well enough with the indigenous male population.”

Montell explained the other factors surrounding mating behavior — generally animals have to balance courtship with other physiological needs such as food and sleep. However, Montell’s team has discovered mutant fruit flies that display heightened levels of courtship behavior.

Chao Liu, a second-year postdoctoral researcher in the Montell lab, will be conducting the research with these mosquitoes. Liu’s Ph.D work involved Anopheles gambiae, which is the vector for human malaria.

“We know a lot about fruit flies, which have been studied for more than a hundred years,” Liu said. “And mosquitoes are close relatives to flies in evolution. We can use that knowledge and information and apply it to mosquitoes.”

Montell mentioned that a secure laboratory is in the works for housing transgenic mosquitoes in the future.

“We’re leveraging many years of experience about sensing and animal behavior here,” Montell said. “If this works, we could potentially stop the infection of half a billion people a year.”

Two other UCSB faculty members have received the Pioneer Award so far, with Molecular, Cellular and Developmental Biology (MCDB) Professor Denise Montell the most recent winner in 2014.

Beautifully written article and a big congratulations to Craig Montell!