The Daily Nexus
News
New Draft for Sexual Violence Policies To Accept Community Input
October 20, 2015 at 1:55 am by Nicholas Bogel-Burroughs 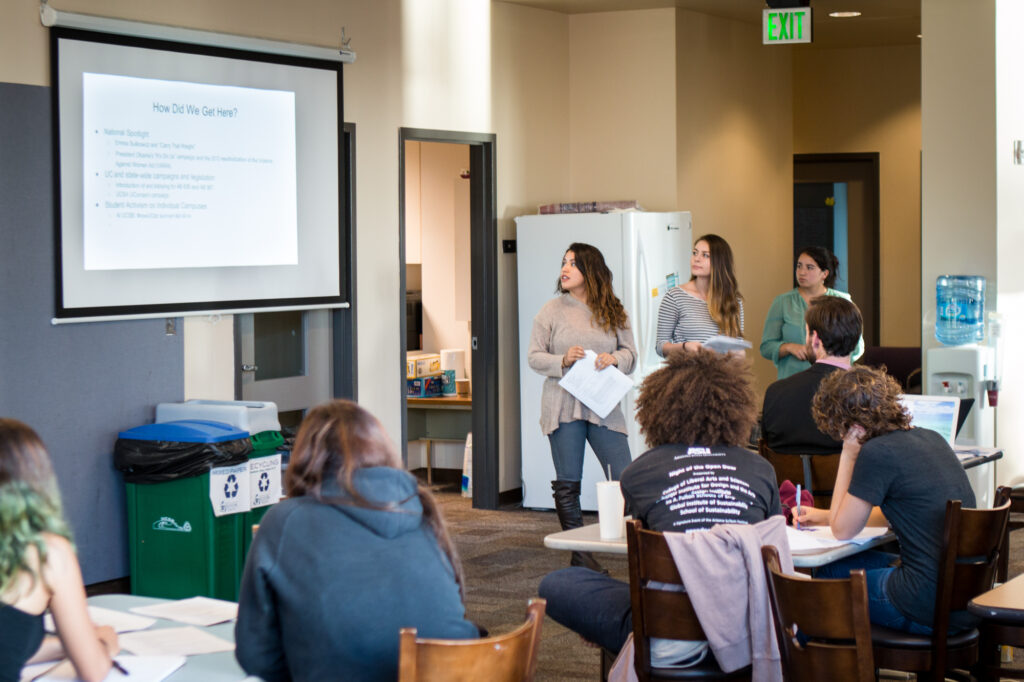 #NowUCSB, Campus Advocacy Resources and Education (C.A.R.E.) and Student Affairs co-hosted an open forum in the MultiCultural Center on Monday for comments and questions on the current draft of the University of California’s Presidential Policy on Sexual Violence and Sexual Harassment.

The provisional document updates the definition of consent, requires a written explanation of rights to be provided to survivors and increases the number of “responsible parties” who must report a possible act of sexual violence or harassment to the Title IX office, which represents a comprehensive federal law that prohibits discrimination on the basis of sex in any federally funded education program or activity. In the past, “responsible employees” included managers, supervisors and other “designated employees” such as medical staff. According to the new policy, any University employee who is not a “confidential resource” — including resident assistants, teaching assistants and any other student employees — who hears about possible sexual assault must notify the Title IX office.

In a draft of the policy sent to UC campuses, University of California Office of the President (UCOP) has asked faculty, staff and students from all UC campuses to review the 25-page policy and submit comments by the end of October, after which UC’s Policy Work Group will review the suggestions and complete a final draft by January 2016.

UConsent Coordinator, Take Back the Night Co-Chair and fourth-year global and feminist studies double-major Ashley Morgan helped organize the forum and said it was important to hold an event during which a variety of people could have their voices heard.

“The best of intentions — through policy and administration — if [they are] not speaking to the population who we’re trying to serve, then we’re failing,” Conway said. “I love opportunities like this where we can bridge administration’s best efforts with what really speaks to our student population.”

According to Graduate Student Association Vice President of Committees and Planning Timothy Irvine, who helped organize the event, the new policy would mean that survivors who do not wish to report an incident would have fewer options for confidants, seeing as many people are now required to report such information to Title IX.

“It reduces the amount of people who the survivor can confide in because they know if they do confide in this person, they’re putting them in a terribly awkward position,” Irvine said.

“We as graduate students and we as TAs should not be mandatory reporters so that students do have an option to confide in their friends and people they may view as their friends, like their TAs,” Selvidge said.

Title IX coordinator Ricardo Alcaíno said the policy would not automatically lead the Title IX office to pursue the case if, for example, more damage would be caused to the survivor by launching an investigation.

“It’s not like if someone is a responsible employee and they report it, we’re off to the races,” Alcaíno said. “It’s so no students on campus feel like there’s nothing to do. That’s the most important thing.”

According to Morgan, one of the “largest weaknesses” of the proposal is the absence of a mandatory minimum suspension for perpetrators. During a 13-hour sit-in in May, #NowUCSB campaigned for a four-quarter minimum suspension of students convicted of sexual assault.

Irvine said the document should include mandatory minimum suspensions to warn students that there will be serious actions taken against perpetrators of sexual violence.

“Part of this is that people would know there will be consequences, because, so often, there are no consequences,” Irvine said.

Alcaíno said that a mandatory suspension may impact whether or not survivors choose to report an incident.

Conway said the efforts of students, including the #NowUCSB sit-in, are resulting in more progressive policies.

“I am so proud and honored to be a part of UCSB,” Conway said. “Students are at the center of all of this. I think student activism is what’s driving change at a large university.”

The forum’s organizers plan to set up a public Google Doc where anyone can suggest changes to the policy draft. These suggestions will then be submitted to UC’s Policy Work Group, which is currently drafting the final policy for the president’s approval in January.

The Google Doc is viewable here.