The Daily Nexus
Volleyball
Gauchos’ Pair of Rematches a Chance at Redemption
October 20, 2015 at 9:22 pm by Sean White

While the UCSB women’s volleyball team may still be rejoicing over its first win in 11 matches, the time has come for the team to bear down and prepare for the difficult weekend ahead. The Gauchos are set for a pair of rematches against Long Beach State on Friday and Cal State Northridge on Saturday.

“I think we regained confidence from our wins, but we know that we’re going to have to play better this weekend to have better results,” Head Coach Nicole Lantagne Welch said. “We had a pretty tight match with Long Beach here and with CSUN we played really poorly, and it was a week we had two changes to our lineup due to injury, so we were kind of all out of sorts. I think we’re excited to play them again and have the opportunity to say ‘hey, this is how we are now.’” 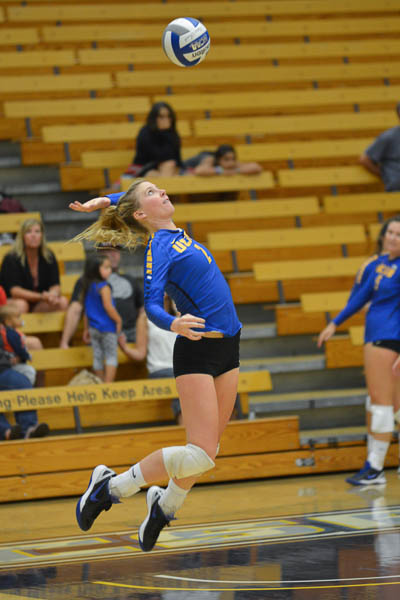 Santa Barbara is fresh off earning its first Big West victory of the season versus UC Riverside. UCSB looks to improve its 6-12 overall, 2-5 conference record against a recuperating 49er team and the declining Matadors.
Long Beach State is in search of regaining its dominance of the Big West as the 49ers now have two conference losses after a 2-3 loss to No. 8 Hawaii last Sunday. Still, they possess a notable record at 15-5 overall, 5-2 in Big West play. After a blazing 3-0 start to open its conference schedule, Cal State Northridge has been swept in its last three consecutive games. The Matadors’ latest slump leaves them with a 4-14 overall record, 3-3 in conference.

A pivotal asset to the Gauchos’ success in the past weekend, freshman setter Emilia Petrachi looks to capitalize on her tremendous play. Petrachi received Big West Freshman and Defensive Player of the Week awards for her remarkable performance in UCSB’s two victories. She finished the weekend with a total of 43 digs and an incredible average of 5.38 digs per set. Notably, since the start of conference play, Petrachi leads the Big West with an average of 4.92 digs per set. Her productivity will be vital to the Gauchos defending against Long Beach State’s offense, who ranks third in kills per set in the conference with a 13.33 average.

Despite having its 23-conference-match winning streak snapped earlier this season, Long Beach State remains as one of the Big West’s most prominent teams when playing on home court. The 49ers have an active streakof 14 straight conference wins when playing in Walter Pyramid.

Guiding LBSU’s resilient home stand is the play of junior outside hitter Nele Barber. The Marquette University transfer has tallied double digit kills in all of the 49ers’ matches and owns a team-high of 297 kills, ranking second in the Big West. Barber has recorded a double-double and led Long Beach State in kills in 16 of 20 matches so far this season. Furthermore, she has led Long Beach State in kills for its last eight matches.

The Gauchos’ last pit stop in their road trip through southern California is at Cal State Northridge.

CSUN’s three-match losing streak comes as a result of playing the Big West’s top three teams in Cal Poly, Hawaii and Long Beach State. In two of the team’s three losses, the Matadors did not have one player in double digit kills. However, in its most recent loss to LBSU, senior outside hitter Cieana Stinson erupted for a tied match-high of 18 kills. Her average of 4.55 kills per set and 91 kills since the start of Big West play rank in the conference’s top five, respectively. The Matadors certainly are a better team after a grueling trio of matches and should not be overlooked heading into Saturday’s contest.

UCSB’s inability to close out sets in its initial meetings versus LBSU and CSUN primarily led to the Gauchos’ 3-1 defeats to both teams. However, Santa Barbara showed some improvements by holding UC Riverside and Cal State Fullerton to hitting averages below .200.

“That’s something that we did well this weekend, playing well in the tight sets and finishing at the end,” Lantagne Welch explained. “If you’re keeping a team from hitting a good clip, they’re going to get frustrated and make more errors. At the same point, if you can attack well and get enough kills from enough spots you’re going to score points. Those are two critical things, that we’re sharp on both sides of the ball.”

The start time of UCSB at Long Beach State is set for Friday, Oct. 23rd at 7:00 p.m. at Walter Pyramid. The following day’s match at Cal State Northridge on Saturday, Oct. 24th will take place at 7:00 p.m. in the Matadome.